Who’s the most typecast of them all?

Who’s the most typecast of them all? April 8, 2009 Jeffrey Overstreet

We know that Godfather Al “Scarface” Pacino is in talks to play the power-mad King Herod for the film Mary, Mother of Christ.

Today, MTV’s MovieBlog reports that he’s about to play another heavy-handed leader (although in this case, that heavy hand will be held, um… “closer to the vest”)…

Yes, Pacino is soon to be heard shouting like a power-mad Napoleon.

But I don’t think the Academy is going to be in any hurry to give him another Oscar. They know it’s inevitable that he’ll eventually make a great Kim Jong Il. That’s the performance the world is waiting for. 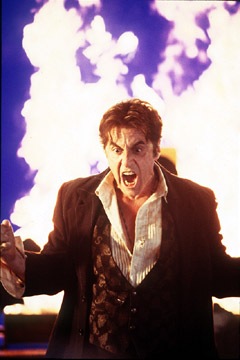 Speaking of typecast actors, which actor could give Al Pacino a run for his money? We know Pacino’s capable of playing other kinds of characters… and once in a while he’ll even turn in a performance without SHOUTING. But really, do we need to see Pacino as Saddam Hussein? Pacino as Idi Amin? Pacino as Harvey Weinstein? The man is still a great actor. He was great in Michael Mann’s Heat and, in my opinion, equally compelling in Mann’s The Insider. I wanted to see him play King Lear, because even though that is a kingly character, it’s a character who is humbled and ruined. I was sad to see that project canceled.

Which actors are most predictably cast as a certain sort of character? Who needs to break out and show us that they’re capable of doing something else?

April 9, 2009 Guess Why I Love This Trailer
Recent Comments
8 Comments | Leave a Comment
Browse Our Archives
get the latest from
Entertainment
Sign up for our newsletter
POPULAR AT PATHEOS Entertainment
1

8 responses to “Who’s the most typecast of them all?”