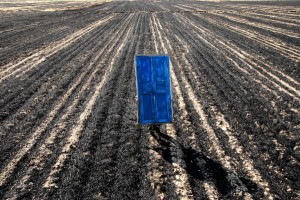 This review, which also covers the film Departures, was originally published at Christianity Today Movies. For further exploration of this film, read “Departures: Journeys with Asian Filmmakers” in Image.

Layoffs, bankruptcy, skyrocketing unemployment. Tough times, busy days for job hunters, and everybody’s got an opinion about what went wrong and how to fix it.

Movies about employment tend to give us rags-to-riches success stories: Young people with a dream overcome impossible odds and prove the naysayers wrong, earning fortune and glory through determination. But is that really the story we need right now? Maybe there’s something more useful than the assurance that we’ll all get our dream jobs, we’ll all succeed, we’ll all step into the spotlight if we just keep on trying.

This summer, two extraordinary new films offer moviegoers very different visions of success. Their characters learn hard lessons about humility, as their dreams come crashing down (in one case, quite literally). But they also learn a thing or two about finding fulfillment in something more than spotlights and paychecks.

Have you ever prepared a dead body for incineration? I doubt you’d jump at the opportunity.

But Daigo Kobayashi (played by Masahiro Motoki) is desperate, and that’s the job he’s been hired to do. He’s just moved home from Tokyo, grieving the dissolution of the orchestra in which he was achieving his dream as a concert cellist. Now he’s stuck with the bill for his expensive cello—the symbol of his failing dreams. “It’s been an awkward time,” he says. No kidding.

After all, this work is considered shameful in his culture. The “burakumin” were once outcasts, condemned in ancient Shinto tradition for their contact with the dead. Japan’s caste system is ancient history now, but prejudice continues. Daigo’s irrepressibly cheerful wife Mika (Ryoko Hirosue) is just one of many who may reject him for his new vocation, if his secret gets out.

Daigo’s distress is the subject of Departures, the dramatic comedy (comedic drama?) that pulled off the biggest surprise of the 2009 Academy Awards, winning the Oscar for Best Foreign Language Film over the celebrated French feature The Class (previously reviewed in this column).

And yes, I said “comedy.” Daigo’s work leads him into all kinds of fascinating, nerve-wracking situations, and director Yôjirô Takita stirs up some hilarious scenarios along the way. You can learn a lot about a family’s secrets during those discomforting funeral ceremonies. And few jobs are more humiliating than playing the part of a dead body for an instructional video on embalming.

As funny as it is, Departures asks us to consider how working in close relationship with a community, rather than as a performer on a stage, offers rich rewards. Daigo enters into intimate hours with the brokenhearted, sharing their burden and observing their wounds, their grudges, their family secrets.

“The ritual of encoffinment is to prepare the deceased for a peaceful departure,” Daigo tells the assembled families. But it’s clear that he’s also helping the families find peace in the midst of heartbreak and turmoil. As he prepares the bodies—a graceful and beautiful ceremony that involves undressing the deceased, washing their bodies, and posing them in positions of peace—he is helping loved ones say goodbye.

He’s also learning what really matters. He observes, “What I’d always taken as my dream maybe hadn’t been one after all.” Facing the fragility of human life on a daily basis, he comes to care more passionately about his time with Mika. And he must reckon with the death of his mother and the absence of his father, wounds he has neglected for years.

American moviemakers may learn a thing or two themselves from this richly layered film, which reminds us that comedies can be funny without being crass, and dramas can be affecting without any emotional histrionics or sentimentalism.

While it gives us a picture of a very different culture, influenced by starkly contrasting religious beliefs and superstitions, it’s worth noting that Daigo and his mentor grow in their hope of joy beyond the grave. During a simple Christmas dinner, Daigo blesses the meal with a passionate performance of “Ave Maria,” an expression that conveys more consolation than any words of comfort ever could.

The Song of Sparrows tells another story of a man who loses his job and is forced to start from scratch. But it’s an altogether different story.

It begins with an ostrich. When ostrich farmer Karim (Reza Naji) accidentally lets one of the valuable birds break free from the flock and run into the wilderness just outside of Tehran, the timing couldn’t be worse. Karim’s daughter Haniyeh (Shabnam Akhlaghi) needs a new hearing aid. It’s going to cost him 400 bucks that he doesn’t have. And now, he’s been fired from the farm.

His first idea? Find the ostrich! Karim hops on his motorbike and rides off to find the ostrich like a lone samurai off on some sacred quest. But those aren’t weapons he’s carrying—they’re pieces of an ostrich costume. Few big-screen sights this year will be as memorable as that desperate fool strutting around in the desert and performing a ostrich mating dance as if auditioning for Julie Taymor’s The Lion King on Broadway.

Riding his bike into the big city, Karim stumbles onto a brand new opportunity. A cell-phone yammering businessman jumps onto the back of his motorbike, assuming that it’s a taxi. Flustered, Karim plays along. And he quickly learns that there’s a lot of money to be made in this expanding, flourishing city. Watchful and opportunistic, he’s soon carrying wads of cash, a new champion for Iran’s booming business world.

We can see what’s coming. At the beginning of the film, Karim wanted to sleep with his wife on the rooftop under the stars. Now he cannot wait to mount a massive TV antenna there. Piece by piece, he starts bringing home gaudy acquisitions—fancy window frames, expensive gadgets, household appliances. As greed gets the better of him, he turns to ethical compromise, stooping to robbery when opportunities present themselves. Who’s going to miss one refrigerator from a delivery truck?

Even though he berates and punishes his children whenever he has a notion they’re up to something devious—Karim’s son is trying to become a millionaire by cleaning up the family’s water reservoir and turning it into a goldfish farm—it’s Karim who’s being childish. The disease of consumerism begins to take a toll on his heart and, in a sudden cataclysm, his body.

This summary makes director Majid Majidi sound preachy and sentimental. That’s true to an extent: Few filmmakers can catch up with Steven Spielberg when it comes to filming slow zooms on teary-eyed faces, but Majidi’s in the race. Where Iran’s most celebrated filmmaker—Abbas Kiarostami—asks viewers to think things through and arrive at their own conclusions, Majidi has typically been more willing to use familiar (even Western) storytelling tactics to provoke the audience’s emotional engagement.

Nevertheless, Majidi never misses an opportunity to fill the screen with poetry. Whether it’s a big white ostrich egg or a goldfish in a pond, Majidi’s never met a metaphor he didn’t like. As in his two most beloved films, Children of Heaven and The Color of Paradise (in which Naji played another hot-tempered father), Majidi associates beauty with the tender hearts of children. (I highly recommend you track down both of those enchanting films.)

Majidi is clearly troubled by what is happening in Tehran. Movers and shakers, perpetually plotting by phone, are crawling over that city as madly as the ants Majidi finds swarming around a broken ostrich egg in the desert. Infected by ambition and self-interest, people become like swarming insects, disregarding and trampling one another.

It seems to be a trend. More and more films from Iran and other Eastern cultures are showing us how ancient traditions and cultures are being overrun and buried by the new. (See Jia Zhangke’sStill Life, reviewed in the previous installment of this column.) The price of industrialism, capitalism, and progress is very high. Western viewers may find these visions of destruction unsettling. But in truth, we are paying the same price and making the same compromises; it’s just happened more slowly and incrementally here, so we haven’t seen such a dramatic shift. If we are honest and humble, there is much for us to learn from these stories.

In a statement, Majidi denies that he is condemning modernity. “Modernization,” he says, “should be at the service of humanity, yet people find themselves conquered by it. The result is that with each passing day we are becoming more distant from our own human values. … All of our values—including friendship, morality and beauty—become less important day by day. In opposition to this process, my aim was to say that we must return to our human essence or else face a major disaster in the future.”

Western viewers may scratch their heads at the focus on ostriches—famously thick-headed birds, born with wings but unable to fly. And yet, they are strangely magnificent, even beautiful at times. They seem a perfect image to capture Majidi’s view of humanity and the natural world. We’re broken, but we’re also evidence of God’s glory and capable of greatness. It seems that Karim’s salvation may depend on whether or not he learns to really see, and value, what he had to begin with.

I’ll never forget the sight of Karim running across open ground, greedily taking back an item that his wife had given to a neighbor in an act of charity—a bright blue door, which he bears upon his back. It’s a poignant image. What he’s carrying could have been an opportunity for relationship; but instead, he treats it like a possession to be owned, and so we see him running, burdened, having slammed the door in God’s face.

Majidi opens his film with the words “In the Name of God.” And it’s God we’re meant to remember in this tale of hardship, job-hunting, and paychecks. Majidi’s not concerned with distinguishing his film as “Christian” or “Muslim” in its sensibility. As far as he’s concerned, we all have a time when we sense God working in our lives before we declare ourselves as adherents to a particular tradition—and that is the territory where he likes to work.

Nevertheless, it’s hard to avoid hearing echoes of Scripture in his work. Karim learns that even if we find that perfect day-job and achieve great wealth, if God’s grace is not our greatest treasure, those things we count as blessings may soon become burdens too painful to bear. 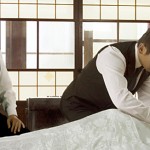 June 6, 2009 Jeffrey Overstreet's 140 Characters.... #1
Browse Our Archives
get the latest from
Entertainment
Sign up for our newsletter
POPULAR AT PATHEOS Entertainment
1