Moviegoers Who Stare at So-So Comedies

The Men Who Stare At Goats is… amusing. Not much more than that.

I’ve heard people comparing it to Coen Brothers films, but it’s nowhere near as substantial or clever. I enjoyed it like I enjoy a good goofy episode of… oh… “My Name is Earl.” But no, it wasn’t worth eight bucks. It’s a bunch of silliness, with intermittent attempts at political commentary (that never amounts to more than broad-stroke, timeworn swats at the Dubya administration). And it evaporates when you walk out the door. At least, that’s what it felt like to me.

Ewan McGregor talking to U.S. soldiers who call themselves “Jedi”? it’s funny for a little while. Jeff Bridges riffing on his Big Lebowski character? Well, it made me want to watch The Big Lebowski. George Clooney giving a slight variation on his Burn After Reading performance? He was more exciting in the Up in the Air preview before the film.

Goats is based on Jon Ronson’s nonfiction work about some spectacularly loony U.S. army’s psychological operations. Remember the key in the ignition of Raiders of the Lost Ark? U.S. government got nervous when Hitler started exploring the occult in search of special powers, so they turned to Indiana Jones to help them. Well, it turns out that this isn’t too far from what happens in the real world… except that instead of turning to Indiana Jones, they turn to U.S. military recruits whose only supernatural ability seems to be Astonishing Gullibility.

Lyn Cassady (George Clooney) is a leftover from an abandoned government effort to cultivate New-Age “warrior monks”. Apparently expected to blaze trails in “psychic warfare,” Cassady and company were part of a special force that never really accomplished much, even though they fancied themselves to be “Jedi warriors.”

When Cassady’s discovered in Iraq by a meandering reporter named Bob Wilton (Ewan McGregor, who is also – alas! – our talkative narrator), he adopts the perplexed young man as a sidekick and marches off on a secret mission that turns out to be pretty disappointing, not just to the reporter but to the audience as well.

Most of the movie’s time is spent in flashbacks, as Cassady slowly brings Wilton up to speed on where this secret operation came from. We learn that it started with a delusional Zen master (Jeff Bridges) tried to train recruits to develop telepathic powers, invisibility, and other capacities he could not demonstrate himself. He’s determined to make America “the first superpower to develop super powers.” A disgruntled participant (Kevin Spacey) apparently messed things up for the team, and now the reporter is bearing witness to its last gasp.

The flashbacks are rarely better than amusing comedy sketches with high production values. But the story doesn’t end there: Cassady’s going in search of certain members of that team in order to… what? Well, that’s the mystery. I won’t spoil it here. Suffice it to say that the team won’t be dissolved until they’ve contributed to America’s disgrace on the international stage of the Iraq war.

I can appreciate the screenwriter’s desire to poke fun at America’s recent reputation-spoiling endeavors. We’ve employed violence without sound intelligence or effective strategies; we’ve barged into foreign cultures and increased anti-American sentiments by hurting the wrong people and showing how badly we misunderstand our enemies; we’ve driven civilians off the road (or killed them) with greed-driven maneuvers (the firefight between two U.S. private contractors at a busy Iraqi intersection is the film’s sharpest ironic flourish); we’ve behaved with an arrogance that has led to serious abuses.

I can also appreciate the hilarity of the Zen master’s idea that all we need to do is “dream a new America.” The U.S. seems to be currently experiencing the stunning reality check that Obama’s election did not set in motion a 12-month global transformation through the power of positive thinking. Wars did not cease, and we did not wake up from this present Middle Eastern quagmire as if it was all a bad dream. Cassady and company clearly wanted to find a “non-lethal” solution to the world’s problems, but they’ve become frustrated – even heartbroken – when their LSD-inspired 1967 vision collapsed. The hallucinatory idealism of the “New Earth army” will make you laugh, but it’s the kind of laughter that stings.

And I can appreciate that the story told here is based on events that are more true than most people would believe.

But it’s hard to care about these things when you keep staring in disbelief at the half-assed de-aging work that make the flashbacks entirely unconvincing. Clooney, wearing a long wavy wig in an attempt to look like a young hippie-slash-recruit, looks like… well… Clooney wearing a wig.

And when the film gropes around for something profound at its conclusion, coming up with a half-baked version of the end of Three Kings, the film ends with a whimper, not a bang. This is a case of a true story that is probably quite compelling when you study the evidence, but the movie made from it is only somewhat amusing.

A Netflix movie? Sure. A night out at the cinema? Don’t bother. There are too many other good things on big screens right now. Go see A Serious Man. Go see Where the Wild Things Are. If you want comedy, you’ll get more memorable laughs on network prime-time TV. 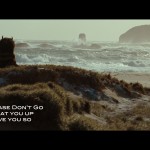 November 10, 2009 Where the Wild Things Are (2009)
Recent Comments
2 Comments | Leave a Comment
Browse Our Archives
get the latest from
Entertainment
Sign up for our newsletter
POPULAR AT PATHEOS Entertainment
1

2 responses to “Moviegoers Who Stare at So-So Comedies”