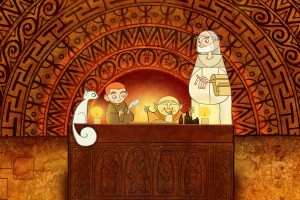 [An abridged version of this review was published in the October 2010 issue of Christianity Today.]

These words help intoruce Tomm Moore’s film The Secret of Kells, a hand-drawn animation film releasing to DVD this month. They’re spoken by Aisling, an ancient fairy who protects the forest outside of the Kells monastery. Her testimony is interesting. After all, she’s a figure from pagan mythology, but this book that turns “darkness into light” is, in fact, a beautiful edition of the four Gospels: Matthew, Mark, Luke, and John.

The Book of Kells, an illuminated manuscript lovingly crafted by Celtic monks circa 800 A.D., currently displayed at Trinity College, Dublin, will strike you speechless if you see it. And this Oscar-nominated film for the whole family is an extravagant tribute.

When a monk named Brother Aidan enlists young Brendan to help him finish crafting The Book of Kells, Brendan goes beyond the monastery walls to collect the secret elements of Aidan’s radiant ink. In the forest, he stumbles into mythic revelations and adventure, even as fearsome Scandinavian barbarians advance. Brendan’s excursion infuriates Abbott Cellach, who is so terrified of a Viking attack that he’s lost his grasp on faith and kindness, becoming obsessed with perfecting a wall.

Some Christians might be troubled by the film’s portrayal of mythical monsters and faeries coexisting with Christian figures. But that’s what makes this movie something to celebrate. C.S. Lewis and J.R.R. Tolkien famously highlighted inklings of truth in many pagan fairy tales, showing us how the world’s myths point toward the One True Myth. Likewise, The Secret of Kells’ vividly reconciles the symbolism and styles of mystical traditions in a way that favors the Gospel. It also suggests—and rightly so—that Christian virtue and the love of nature that is so often associated withpaganism do not have to be mutually exclusive.

Moreover, Abbott Cellach’s self-destructive fears represent familiar failures. Haven’t we all witnessed, on occasion, Christians defending faith in ways that betray a lack of it? Nevertheless, the film ends with a gesture of grace that brought tears to this moviegoer’s eyes.

So why oh why did the filmmakers refrain from mentioning the Gospel? (Is that why the word “Secret” is in the title?) What was it? Anti-Christian prejudice?

I doubt it. Saint Brendan becomes quite a hero. And the book is praised as bringing hope to the world.

Whatever the case, it’s a confounding omission in an otherwise glorious celebration of a sacred treasure. The Book of Kells is, as the film says, a work of art that “lights the way in these dark days.”

December 7, 2010
Great illustrators: Who are your favorites?
Next Post