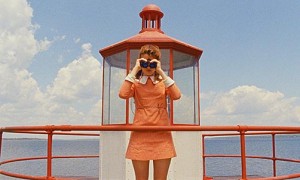 Of Gods and Men made Steven Greydanus say that he felt like he had become a critic in order to be prepared to review that movie. I’ve only felt that way about a few films. Moonrise Kingdom is one of them. Here is my review, which was originally published at Good Letters, the blog hosted by Image. (All of the original comments are posted there.) 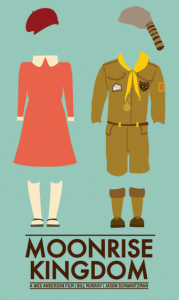 “It’s the rhythm in rock music that summons the demons,” said the church community of my childhood. So I took my musical thrills where I could find them. In front of my grandfather’s turntable, I air-conducted Ferde Grofé’s “Grand Canyon Suite,” Prokofiev’s “Peter and the Wolf,” and Benjamin Britten’s “The Young Person’s Guide to the Orchestra.”

In the latter, a narrator introduces each instrument and section, then the orchestra weaves those signature melodies into a symphonic harmony that left me breathless.

In the latest film from Wes Anderson World—Moonrise Kingdom—Britten’s orchestral guide becomes the central metaphor for the way the world should be. Through that lens, all of Anderson’s films (especially The Royal Tenenbaums) make more sense.

No American filmmaker—not even Woody Allen—has a more recognizable aesthetic or a stronger authorial voice, and this may be the most, well, Andersonian movie yet. His style recalls storybook illustrations, puppet shows, school-project dioramas, and community theatre productions. And in his out-of-tune communities, one rowdy musician—a somewhat holy fool — plays a theme that inspires the rest of the orchestra toward harmony.

Moonrise Kingdom begins with an Our Town-style narrator (Bob Balaban, brilliant!) announcing that an apocalyptic storm will soon strike this New England scene.

Then we meet Sam Shakusky, an orphan running from boy scouts and foster parents. More accurately, he’s running after something—an ideal of love and support that he hasn’t found in foster homes. Played matter-of-factly by Jared Gilman, Sam is a compelling Khaki Scout gone AWOL with camping gear and his dream girl.

She’s Suzy Bishop (Kara Hayward), a teen disillusioned with her family. Her father (Bill Murray) and mother (Frances McDormand) are lawyers who know the letter of the law, but they’ve forgotten its spirit. Sensing that Sam sees her clearly, Suzy drops everything like Simon Peter dropped his fishing nets, to follow Sam.

In his coonskin cap, Sam is an American hero embodying endangered ideals. Suzy’s Sunday school shoes have implications of their own. Together, they trigger disorganized pursuit led by Captain Sharp, a lovelorn police captain played with affecting humility by Bruce Willis.

Moral watchdogs will bark at these under-aged kids on their hideout honeymoon. In doing so, they miss the greater crisis: Who can these kids reach out to for help? Not these unfaithful, cacophonous adults. As in Ang Lee’s The Ice Storm, another film about the consequences of a generation that called self-indulgence freedom, they have no moral high ground.

At least Sam and Suzy have a sense of the sacred: a love characterized by commitment, tenderness, forgiveness, service, intellectual stimulation, and, yes, physical intimacy. Performed for these pursuers—the very people who have given these kids good reason to run—this Romeo and Juliet’s adventure in intimacy is something like the play Shakespeare’s Hamlet stages for his uncle: It’s a picture that just might “catch the conscience.”

By performing the divine symphony, all the instruments of creation discover why they have been assembled together. Initially they stand or sit next to one another as strangers, in mutual contradiction. Suddenly, as the music begins, they realize how they are integrated. Not in unison, but what is far more beautiful—in symphony.

In Sam and Suzy’s declaration of love, the music has started. Let the great reconciliation begin!

While there may be no conscience in the ferocious orphan-buster named Social Services (played by Tilda Swinton), compassion may yet ignite in Suzy’s parents.

Last time we saw an aerial view of Bill Murray (Lost in Translation) lying down, he found himself on a hotel bed beside a flirtatious young newlywed, talking about his difficult duties as a husband and parent. Here, Murray’s Mr. Bishop lies in a single bed, separate from his wife, gasping in despair like a fish on the beach. Whenever Bill Murray lies down and murmurs sadly to himself, I recommend we listen.

This could have become another case of “adults are stupid, so rebel, kids, rebel!” American movies so often champion independence and show traditions like marriage, family, ritual, and religion as empty and oppressive.

But independence is not symphonic.

Like Merida in Pixar’s Brave, these kids must learn that abandoning family and law isn’t the answer. They’re right in what they want, just immature in their approach. Sam deserves the reprimands he receives, and Suzy’s idealization of orphanhood earns a stinging rebuke.

For all of their insights, the children need the community that assembles in the “ark” of that storm-battered church. They need loving fathers and mothers, so they aren’t swept away. What will the grownups hold on to, to keep from falling?

An answer is suggested in the film’s climactic image—bold as a woodcut, resonant as a hallelujah chorus. It left me thunderstruck.

One critic wrote off Moonrise Kingdom: “[It’s] like watching a grown man play with dolls.” He’s right, to a degree. Anderson gives this story a cartoonish, childlike aesthetic that has the sketch-like clarity of a Charlie Brown parable. (Remember, Anderson used Peanuts music in The Royal Tenenbaums). As Madeleine L’Engle said, if an idea is too difficult for grown-ups, “then you write it for children.” Thus, that critic’s complaint sounds like Royal Tenenbaum himself dismissing his daughter’s elementary school play for not being realistic.

Early on, Sam asks Suzy about her binoculars. She answers, “They help you see things closer, even if they’re not far away.” “Hmm,” says Sam. “That sounds like poetry.”

In lavish close-ups, Anderson contrasts a world in disorder with a well-pitched campsite, where everything is in its right place. Perhaps this childlike play is just the thing to catch the conscience of grownups like me, to make us stand and cry out for light. 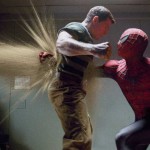