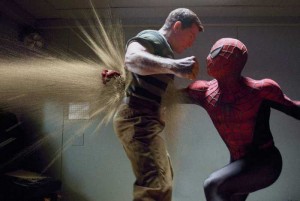 Here’s a flashback to my review of Sam Raimi’s Spider-man 3, which I liked better than a lot of moviegoers, even though it was, yes, something of a letdown. This review was originally published at Christianity Today in May 2007.

“You are such a nerd,” says Mary Jane to Peter Parker.

In most movies, that would be a put-down. But Mary Jane, played again in Spider-Man 3 by the radiant Kirsten Dunst, says it with such affection that she’s sure to reclaim her title as the ideal woman for generations of nerdy, male Spider-fans.

And Peter Parker, who still seems like a starry-eyed adolescent even though he’s played by 31-year-old Tobey Maguire, is still madly in love.

But not madly enough, apparently. Here we are in the third film of director Sam Raimi’s spirited Spider-Man franchise, and the audience is ready to hear wedding bells. But Peter seems to have forgotten how lucky he is to have such an intelligent beauty reclining seductively in his web. Remember that sexy kiss they shared in the first film? Peter’s dumb enough to reprise that famous inverted lip-lock … with somebody else this time.

Clearly, Peter still has a lot of growing up to do. But who has the time to mature when more and more supervillains are arriving on the scene all the time?

Spider-Man 3 explores the latest chapter of Peter Parker’s education in the balance of power and responsibility. In the first film, he was exhilarated by newfound talents, and learned to use them for the greater good. In Spider-Man 2, he felt the burden of responsibility, and considered tossing the mask aside and living a normal life. This time, Spider-Man’s brought crime to a standstill and become the most popular celebrity in New York. But pride comes before a fall, and when you’re swinging between skyscrapers, that’s a very long fall indeed.

To be fair—Spider-Man doesn’t just fall. He’s pushed … by a variety of malevolent influences. The “3” in the movie’s title may well be referring to the number of supervillains ganging up on our hero.

After a vertigo-inducing battle with the son of the Green Goblin—the “New Goblin”—high over the New York streets, Peter is poisoned by yet another nasty bug. No, it’s not a spider. It’s a “symbiote,” a black and sticky parasite from outer space. This malevolent, not-so-silly putty amplifies aggression, weakens Peter’s resolve, and turns him vengeful and arrogant. It’s also form-fitting, taking on the appearance of a spiffy black spider-suit.

These heightened powers come in handy. Parker has learned that the real killer of his Uncle Ben—Flint Marko (Thomas Haden Church)—is still at large. Very large, in fact. Through an accident at a particle physics test facility, Marko’s become the Sandman, a granulated giant who improves on the sandstorm monster we saw in The Mummy.

But there’s yet another crook out there complicating matters. Parker’s rivalry with a brash, deceitful Daily Bugle photographer, Eddie Brock (Topher Grace), becomes a showdown between Spider-Man and a vicious doppelganger called Venom.

Dumping sand out of his spider-shoe after a round of Sandman smackdown, Parker asks, “Where do they find these guys?” It’s easy to sympathize with his exasperation; there are too many players in this movie’s dangerous game. Raimi and his screenwriters just don’t have the time and space to develop villains of substance and character the way they developed Doc Ock in Spider-Man 2. This web is stretched too thin.

You could make a whole movie about Peter’s attempt to reconcile with his grudge-poisoned friend, Harry Osborn (James Franco). But they share only a few scenes, and Franco spends what time he has either sneering with menace or grinning like a goofy teenager.

You could make another movie about Flint Marko, who isn’t such a bad guy, really—he’s just desperate, like John Q, to get money so his ailing daughter can get the treatment she needs. And yet, while Church manages to give Sandman true, uh, grit, the movie neglects him during the last hour, and his story feels unresolved.

There’s yet another movie waiting in Parker’s grudge match with Eddie Brock. And yet, while Grace makes a strong impression as a nuisance and a cheat, his appearances are disappointingly brief. And his reign of terror as Venom isn’t as scary as it should be. (Raimi admits that the Venom story was added to appease fans who demanded an appearance by their favorite super-villain.)

Making things even more crowded, all of Spidey’s favorite supporting characters are waiting on the sidelines for their turn to grab the spotlight. Bruce Campbell turns in his funniest, most memorable cameo yet (he’s been in all three). J.K. Simmons’ J. Jonah Jameson barks outrageous orders as if he’s stayed in character for three years. And Rosemary Harris provides the same performance that she always does as Aunt May, given nothing unexpected to do. Surprisingly, it’s Peter’s landlord (Elya Baskin) and his daughter (Mageina Tovah) who play a more active role this time around.

But the film’s most dramatic and compelling conflict consists of Peter’s battle to overcome his own pride, desire for vengeance, and alarming foolishness—all accentuated by the presence of the black, gooey, parasitic symbiote.

In a sequence that threatens to turn the movie into Spider-Day Night Fever, Parker the Punk gets a wicked-cool makeover that makes him feel like dancing. And he does, in the zaniest superhero spectacle since Michelle Pfeiffer embraced her inner feline in Batman Returns.

It’s here that Raimi proves himself to be the gutsiest superhero-director working today. In fact, his outrageous gamble here may just divide Spider-fans into two groups: those who find this unforgivably corny, and those who laugh until it hurts.

Embracing his inner jerk, Parker struts his stuff with a blonde beauty named Gwen Stacy (Bryce Dallas Howard, taking care to avoid eclipsing Mary Jane’s appeal). He’s a web-swinger one minute, a dance-floor swinger the next, and when the multiple storylines spin him around, he’s an acrobatic mood swinger.

While this tangent strains our suspension of disbelief, Raimi should be congratulated for taking his movie into brave new territory rather than following the familiar path of dark, brooding superhero stories. And nobody can deny that Maguire comes to life in this sequence, clearly having more fun here than he’s had in his colorful big-screen career.

And Kirsten Dunst? Well, her two musical numbers are less-than-thrilling—although, to be fair, the screenwriters acknowledge this in their story. But her portrayal of Mary Jane’s heartbreak is convincing. After Peter’s betrayal, it’s easy to believe that she would run into Harry’s open arms while Peter gallivants about town.

It’s not so easy to believe, however, that Peter could be so mean-spirited, even under a symbiote’s influence. Is he really so blind to the pain he’s causing Mary Jane?

In fact, there’s a lot that’s hard to accept this time around.

When Marko runs from the cops, he just happens to stumble into a top-secret government experiment that gives new meaning to the phrase “dust to dust.” (After he crumbles, how does he manage to “pull himself together”?) When the symbiote rides a meteorite down to Earth, it just happens to land within reach of Peter Parker. (And why does it look like a spidey-suit when it consumes Parker, but like an oily demon when it takes over Brock?)

Ah, but why nit-pick? This is the stuff of crazy comic-book drama. Better to consider what all of this adventure is about.

And the themes are as straightforward as Sunday school lessons: the dangerous allure of vengeance, the power of forgiveness, the nature of true love. There’s even a church standing at the center of the movie’s widening gyre, where Peter wrestles with his sinful nature. That’s enough to induce spasms of joy in those Christian film critics who care more about “a redemptive message” than artistic excellence. An admirable act of sacrifice during the climactic battle is sure to inspire a Christian-market spinoff book: The Gospel According to Spider-Man.

Raimi should be congratulated for breaking the “third episode curse.” Most adventure franchises manage two successful episodes, then collapse in the third. (Remember how Bret Ratner botched X-Men: The Last Stand, after Brian Singer’s two triumphs? Remember how Joel Schumacher robbed Tim Burton’s Batman franchise of its intrigue? Remember Superman 3? Or … well, I almost mentioned Return of the Jedi, but that would be asking for trouble.) While it’s not as satisfying as the second installment, Spider-Man 3 delivers 139 minutes of engaging entertainment that manages to bind drama, comedy, music, and action without losing its balance. And the special effects? You’ll get your ten bucks’ worth, no question.

“This could be the end of Spider-Man,” announces a news anchor. If that were true, the series would end on a memorable note. But Sony and Raimi have confirmed the studio’s plans to move forward with Spidey 4, 5 and 6, so we haven’t seen the last of the Webbed Wonder. The franchise has already netted $1.6 billion in worldwide box office, this edition could well push them toward the $3 billion mark. Will sequel-greed overcome the studio’s defenses? Will Raimi, Maguire and Dunst return for a fourth installment—and/or beyond? (None of them have committed either way.)

We’ll have to hope that, against all odds, the director and the key members of his cast will return to make this the first franchise with four straight triumphs. 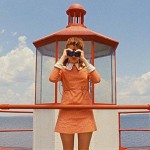