I hate to say, “I told you so.” Especially when the person I’m addressing is myself.

I told myself not to spend full ticket price on The Amazing Spider-man. But I did anyway. And yeah, now it hurts to realize I put down more than $15.00 to see it.

I don’t regret this evening’s moviegoing experience: I got to spend the evening with my friend Danny Walter, who has probably seen more movies with me than anybody on the planet. We had good conversations and an enjoyable evening.

But I do wish we’d invested our moviegoing money in something more rewarding, like a second viewing of Moonrise Kingdom. During the IMAX 3D bedazzlement of Mark Webb’s webslinging reboot, my eyes had fun. My ears had fun. And by the end, my brain felt like a lump of cold oatmeal. It felt neglected. It felt the way my arm feels when I’ve slept on it all night.

I don’t plan to waste time writing an actual review of this film because, really, what is there to talk about besides how it’s different from other versions of the same story? (Really? After the X-Men movies and Batman Begins, we have yet another movie in which the bad guy plans to engulf a city in a cloud of magical poisons that will either induce panic, turn everyone into mutants, or both? Really?)

And why wouldn’t it? The movie gave my brain nothing to do. It gave me nothing to think about, nothing to ponder while I watched or as I drove home. (You might be tempted to say, “Well, what did you expect? You went to a comic-book movie, not Shakespeare.” True. But I’ve seen plenty of comic book movies that did deliver some substantial food for thought.) For all of the amazing depth and dimension of the imagery, I sensed no depth or dimension in the storytelling…

…which made me recall one of the quotes I’ve archived in my blog’s quote collection. It’s something that the great filmmaker Abbas Kiarostami, director of The Wind Will Carry Us and Certified Copy, once said:

I think that a good film is one that has a lasting power, and you start to reconstruct it after you leave the theater. There are a lot of films that seem to be boring, but they are decent films. On the other hand, there are films that nail you to your seat and overwhelm you to the point that you forget everything, but you feel cheated later. These are the films that take you hostage. I absolutely don’t like the films in which the filmmakers take their viewers hostage and provoke them. I prefer the films that put their audience to sleep in the theater. I think those films are kind enough to offer you a nice nap and not leave you disturbed when you leave the theater. Some films have made me doze off in the theater, but the same films have made me stay up at night, wake up thinking about them in the morning, and keep on thinking about them for weeks. Those are the kind of films I like.

Me too, Mr. Kiarostami.

There’s nothing fundamentally wrong with entertainment. But I’ve just come to crave something better. Entertainment is something that happens to me. It doesn’t invite me to do any work. Art invites me to exercise. And when I’m exercising, I’m alive.

Or, as Scott Cairns says about the power of ambiguity in great poetry,

The productive ambiguity of good poems obliges the reader actually to participate with the text, that she collaborate as a co-maker of meaning.

And… well, now I’ve done it. I’ve mentioned Mr. Cairns. Why go on trying to explain when he has already done such an excellent job of it here, at the St. Katherine College blog? Read this.

So, my Friday night is still young. I’m going to open a book of good poetry — maybe even Scott Cairns’ poetry — before I sleep. I have a feeling I’ll get more out of that experience than I did from my expensive movie… and it won’t cost me a thing. It might just be the antidote for the toxins of tonight’s superficial entertainment. 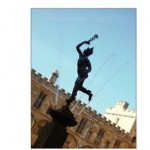 July 7, 2012 Must-read poetry: Caduceus
Browse Our Archives
get the latest from
Entertainment
Sign up for our newsletter
POPULAR AT PATHEOS Entertainment
1