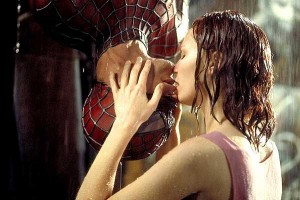 As the appropriately named Mark Webb’s reboot of the webslinger franchise opens to record-breaking box office and ho-hum reviews, I thought I’d look back at my initial reactions to Sam Raimi’s series.

The more I think about Raimi’s first Spider-man movie, which I found admirable but a little disappointing, the more I’m surprised by how it looks like a classic in retrospect. Superhero films have become so numerous since then, becoming an almost weekly event, this movie stands out for its sense of humor, its playfulness, its whimsy, and its faithfulness to Spidey’s comic book history. (Webb’s reboot is alarmingly unfaithful to the original Peter Parker character, according to my Spidey-loving colleagues.)

So, in honor of the original, here’s a ten-year anniversary flashback to my first Spider-man review. (I’ve made a few small revisions to correct some sloppiness. And, as you can see, in 2002 I was extremely frustrated with the state of so-called “Christian movie reviews.”)

Halfway through seeing Spider-man for the first time, I realized that the movie felt strangely familiar. It was reminding me of last year’s Harry Potter and the Sorceror’s Stone.

The more I thought about it, the more it made sense. Both clearly revere their source texts. Both are thoroughly entertaining, with second-rate visuals and first-rate casts. And both of them move at an exhilarating pace, charging headlong from one surprising episode to the next.

But there is another similarity. The hero. Spidey and Harry Potter are brothers in spirit. Both are orphans, raised by an aunt and uncle. Both develop “magical” powers—one through fairy tale magic, one through an accident of genetic experimentation. Parker and Potter struggle with the desire to misuse their gifts, but they face their challenges honorably. The villains they face are close acquaintances, each one hiding an “evil face”. The boys become heroes, but instead of basking in the glory, they come to understand their duty. And both heroes are motivated by devotion to their loved ones.

Thus I was surprised to see that most religious-press critics, the same critics who are preaching that Potter is evil, are ecstatic about Peter Parker’s story.

It makes no sense. Are we really to believe that Spidey is a “spiritual” movie because his aunt and uncle say things like “God bless you” and “Thank God for you, Peter Parker”? I’m not exaggerating.

Movieguide‘s review claims that the film is

… chock full of faith, much to our surprise.

Three times during the story, people say very clearly, “Thank God for you, Peter.” Peter Parker’s aunt, with whom he lives, says the Lord’s Prayer just as the villain attacks, so her prayer to “deliver us from evil” seems to be answered by God’s Grace alone! Cliff Robertson, who shows up at a lot of real-life Christian events in Hollywood, says, “Let there be light,” as he screws in a light bulb, to which his wife May replies, “God will be thrilled.” In another scene, May asks the Green Goblin’s alter-ego, Norman Osborn, to say grace. There are many other God bless you’s. Furthermore, Spider-man Peter Parker’s uncle tells him as he dies the theme of the movie, “With great power comes great responsibility,” to which Peter much later adds, “This is my gift and this is my curse.” … Eventually, even the conflicted Norman/Green Goblin wishes Peter “God Speed.”

And a critic at Hollywood Jesus goes so far as to say that Spidey is “the most Spiritual of all super heroes” and that “his Spirituality is rooted in Christianity.”

Where I come from, you have to do more than throw around God-related catch-phrases and have prayerful family members to demonstrate that you’re rooted in the Gospel.

And are we to believe Harry Potter is satanic, compared to Peter parker, because he flies around on a hot-rod broom instead of a web? Think for a minute. If Harry’s whimsical tricks could lure children to the occult, surely Spider-man will influence them to try steroids or genetic enhancements, jump off buildings, and carry out vigilante justice.

Both stories offer us a moral hero who, while small and humble, uses his unique talents to shame the proud and save the neighborhood from evil. Thus they both illustrate the rewards of love, kindness, sacrifice, and responsibility.

But I’m off on a tangent. Let’s talk about Spider-man and let the crusaders carry on with their unnecessary battles.

Based on my experience with Spider-man comics (Spidey was really the only comic book hero who mattered to me when I was growing up), it seems to me that Tobey Maguire plays the part of Peter Parker exactly right. Parker is on the edge of manhood, awkward around his peers, a little shy around girls, insecure about his unimpressive physique, and unsure of his place in this world. When a spider—a genetically enhanced super-spider, to be exact—bites him on the hand, he suddenly has a new host of troubles. Compared to this, puberty looks like kids’ stuff. Peter wakes from a fever to find that his body has had a complete transformation overnight. Maguire gives Parker bug-eyed amazement and excitement as he discovers his powers. In perhaps the most eloquently composed moment of dialogue in any script this year, Peter pauses, having crawled halfway up a building with his bare hands—he looks down and says, “Woooo hooooo!”

But Maguire also imbues Parker with something else that shows how perceptive he is as an actor. He gives Parker fear. Real fear at seeing his suddenly muscular frame, fear of his new ability to dodge blows in a fight and to fight back with gusto. Further, there is the fear of responsibility… of all the things that he can do for people who cannot stick up for themselves. This is a young man we care about 30 minutes into the movie. This is not your typical cartoon-based action movie.

Maguire’s is one of two great performances in Spider-man. He makes the movie a rare treasure—one of those adventures where the hero is more interesting than the villain.

Can you think of others? Raiders of the Lost Ark, perhaps. Star Wars. By contrast, I’ve never found Batman, dark and strange as he is, to be as interesting as the Joker, the Riddler, and Catwoman. Villains have an easy time being interesting. Heroes are principled, mannered, with rules to follow. They tend to bore us. (Does anybody else think that Frodo is the most uninteresting character on Tolkien’s march into Mordor?)

But Parker is like the scrawny Little League player who gets up to bat at the bottom of the ninth; you’re on the edge of your seat because you’re hoping against hope that the little guy will win out in the end. You’ve been Peter Parker at some time in your life…the reject, the underdog, the intimidated kid groping for confidence. You’re rooting for him.

But you also just love to watch him fly around the city like some sort of Urban Tarzan, casting the next web just as he comes to the end of the last. Director Sam Raimi whets our appetites with these brief but exhilarating rollercoaster rides through the air. The crowd was visibly enthralled each time.

I sincerely hope that the sequels offer a lot more of the web-swinging.

I also hope they come up with better special effects. If James Cameron had directed the film—and he almost did—he would have settled for nothing less than photo-realistic Spider-man careening through the air. Raimi’s film only achieves that a couple of times, and one comes as the film’s final shot. Jurassic Park came out nine years ago, folks. Maybe the studio needed to give the FX folks more time. If Crouching Tiger could make us believe warriors could fly, surely Spider-man could have done just as well. It doesn’t.

Cameron would have given us a romance with more vitality. This one smacks of Hallmark Card sentimentality. Peter is forced to give speeches full of sap and goo. If these declarations of love were translated to a comic book, the thing would be as thick as War and Peace. Kirsten Dunst plays Mary Jane with as much charm as she can, but Cameron would have given her more room to make the character compelling.

A different film composer would help as well. Danny Elfman’s soundtrack is derivative and unremarkable. And I say that as a big fan of Danny Elfman. How could the guy who brought such memorable themes and moods to Edward Scissorhands, Batman, and Midnight Run, turn in something so unremarkable and derivative? Maybe he was in a hurry. There’s a certain recycled feel to that ominous anthem-less accompaniment.

May I make one more request? If Sam Raimi can get an actor as good as Willem Dafoe to play the villain, he should let him act! Half of the time here, Dafoe is encased in a costume that keeps us from seeing his face. When he takes off the mask, he’s brilliant. With the mask on, he looks like one of those poor college kids earning money at Disneyland by putting on an extra-large head. (One of my moviegoing friends came up with that comparison… can’t remember who. Sorry.)

Spider-man offers two solidly entertaining hours. The first is engaging, interesting, and even moving. The second gives up on character development and shoulders the burden of genre conventions. It turns into the usual good-guy/bad-guy showdown.

But there’s a problem. Dafoe’s Green Goblin has already carried out his revenge on his enemies. Spider-man didn’t stop him. So what is his motivation to continue stirring up civil unrest? Why bother with Spider-man? Does he have a complex that says there’s only room in this town for one masked super-person?

The joys of the first hour fade as Goblin and Spidey engage in a bunch of boring face-offs, during which Spider-man’s “spider-sense,” which warns him about oncoming danger, mysteriously stops working without explanation.

There are other plot problems, and they become distracting:

But on the strength of a few scenes, Spider-man overcomes its weaknesses.

In these moments, you can taste how good the movie might have been.

Complaints aside, Spider-man is well worth seeing. This is one of those rare adventure movies in which character, not violence, is the backbone of the film. “With great power comes great responsibility,” says Uncle Ben, and the words ring in Parker’s ears, steering him onto a path that will make him a hero. It’s the main theme of the entire super-hero genre, and of many other more significant works of art as well. We want to see Spider-man beat the snot out of the bad guys, but Parker is too soft-hearted for that. He asks us to focus on saving the good folks instead of executing the bad folks. He’s an honorable and fantastical role model in a world that glorifies violent revenge.

That’s worth celebrating. That inspires me much, much more than the fact that somebody says “God speed.” 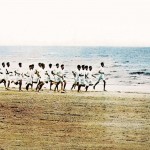 July 4, 2012 Truffin and Morefield on Chariots of Fire: Does God care who wins?
Browse Our Archives
Related posts from Looking Closer