Indiana Jones and the Fall of My Favorite Hero, Part One: King of Heroes?

Indiana Jones and the Fall of My Favorite Hero, Part One: King of Heroes? August 21, 2012 Jeffrey Overstreet 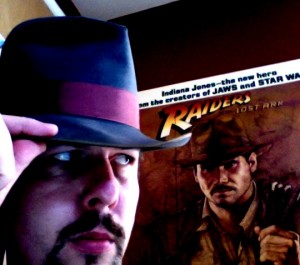 My favorite adventure movie of all time is coming to IMAX screens for a short while, a special release to get consumers charged up about the approaching Indiana Jones blu-ray collection.

Since the movie has risen again, I thought I’d resurrect something of my own… an essay that I wrote about Indiana Jones for a Christian publication a couple of years ago. The editor decided this wouldn’t suit his publication’s purposes, so I put it away and forgot about it. Stumbling onto it this week, I realized that this looks like the right time and place to give it a home. So I’m publishing it as a series. Consider this a celebration… and a eulogy… for my all-time favorite big screen adventurer.

Let’s get this party started… 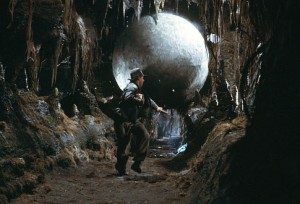 On June 12, 1981, moviegoers watched Indiana Jones disarm a gunslinging traitor with one swift lash of his bullwhip. The bloodied villain, caught red-handed (literally), fled, and we saw Harrison Ford’s glare smolder beneath the brim of that fedora for the first time. We knew he meant business.

A few minutes later, as this treasure hunter seized a priceless golden idol and fled an ancient temple, he dodged poison darts, leapt across a chasm, and outran a massive boulder, all the while clutching that treasure the way a running back carries a football. Stealing the idol, he stole the hearts of moviegoers everywhere.

Well, almost everywhere. The great critic Paulene Kael wrote that Raiders of the Lost Ark is “an amalgam of [George] Lucas’s follies — plot for its own sake, dissociated from character or drama … Kinesthetically, the film gets to you, but there’s no exhilaration, and no surge of feeling at the end.”

So even the finest critics can be wrong from time to time. Polls like the AFI Top 50 Heroes list show that no big-screen adventure hero is more beloved than this whip cracking, wise-cracking professor of archeology, this expert on the occult, this — how does one say it? — “obtainer of rare antiquities.”

But that hasn’t stopped Hollywood’s league of adventure filmmakers from trying to dethrone him. Almost every action hero since Indy has been influenced by this love child of George Lucas and Steven Spielberg. Most cliffhangers post-1981 have taken cues from the relentless chase scenes and machine-gunning sarcasm that set Raiders apart. If you stripped all of the Indiana Jones references out of Steven Sommers’ The Mummy, you’d have almost nothing left. From the car chases in the Bourne saga to the gutsy stunts in the latest James Bond film — even the best of those imitators have failed to win such an enthusiastic following. Jones’s adventures look better and better in retrospect.

Contrarians will be quick to complain that the Jones franchise itself is a collage of borrowed ideas. They have a point; the series draws heavily from old serial cliffhangers; but Lucas and Spielberg have always been open about the movies that inspired them. The genius of the Jones films is, in part, how Lucas and Spielberg weave ideas from disparate sources into something that surpasses its source materials. These guys raised the bar. From the stunts to the special effects to the music, adventure had never been crafted with such bravado and excellence.

What is more, there were elements that transcended the genre of James Bond, The Lone Ranger, and dime store volumes of pulp fiction. The Indy series is much more than the sum of its parts.

So what is it that makes Jones stand out as the most influential big screen hero of all time? Indy’s signature hat, his tattered costume, his weapon of choice, his particular weaknesses (snakes and women) — all of these have obvious precedent. What is it that sets him apart from explorers like Alan Quartermain or superheroes like Spider-man?

Is it Jones’s nobility that sets him apart?

Hardly. Indy never sets out on a quest to save the world. He stumbles into heroism.

In Indiana Jones and the Temple of Doom, our hero falls from an airplane and crash-lands in the middle of a crisis. His conscience requires him to stay and risk his life in order to rescue children from slavery.

In Raiders, it’s not love that leads him to Cairo in search of the Ark of the Covenant. Indy seems motivated by the desire to make an historic archaeological discovery before the lowlives do. His sustains a show of skepticism regarding the Ark’s power… until God’s wrath starts breaking loose at the end of the movie. Then, we see that he’s capable of faith after all.

In Indiana Jones and the Last Crusade, Indy’s like an overgrown teenager trying to save his father’s life. When he finds himself within reach of the Holy Grail, that treasure-hunter’s desire that he inherited from his dad almost ruins him.

Could it be his respect for human life that sets him apart?

Doubtful. Indy’s scores quite an impressive body count in each of his quests. He’ll nonchalantly shoot a swordsman that threatens him. He’s hold back as an airplane propeller dices a bully. He’ll throw a combatant through a truck windsheld, then run him over. He’ll bring down a line of Nazis with one gunshot. No, Jones does not seem haunted by the casualties in his wake.

How about his way with women?

Nope. Indy seems stuck in an adolescent’s idea of love. In Temple of Doom, he falls for a flighty entertainer. She’s nowhere to be seen in Raiders, where he reunites with Marion, an old flame. While he shows genuine concern for Marion, she’s not even mentioned in Last Crusade, and he barely hesitates to sleep with a clever, sinister seductress.

It’s his resilience, then… right?

Indy always gets back up after a good pummeling. He’s like the Energizer Bunny of action heroes. He just keeps going, and he survives seemingly impossible ordeals.

Is that his secret? Not really. Superheroes who can survive unthinkable torture and violence are a dime a dozen these days.

So what is it that sets Indiana Jones apart from other heroes?

But I’ll take a swing at it as this series progresses. Tune in tomorrow for Part Two. 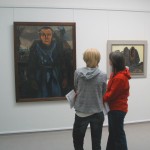