I have a proposal for the next movie in the Bourne franchise. But first, a quick recap of the series so far.

The Bourne Identity and The Bourne Supremacy were surprisingly substantial entries in the super-spy genre. Directors Doug Liman and Paul Greengrass and screenwriter Tony Gilroy made us believe in Jason Bourne, a highly skilled assassin who emerges from clouds of amnesia to discover, with increasing horror, the crimes he was designed to carry out in the name of American superiority. For all of their elaborate action scenes, they made us care about a man of conscience who strikes back against those who made him a monster.

But the third and final Bourne movie, while big on action, was small on ideas. As it wrapped thigns up, the action got bigger and louder, but the storytelling ran thin. “Revelations” were underwhelming, and the series’ pattern of constantly shifting between the “handlers” at their surveillance screens and the agent trying to dodge them became tiresome.

Why bother with a fourth movie? The ethical questions have been explored. The character’s arc is complete.

Alas, there is no such thing in Hollywood anymore as the end of a franchise, so long as the last installment made money. To hell with storytelling. This is the first Bourne movie in which the story is just a scaffolding on which to stage the latest Bourne-style action scenes. It’s easy to imagine Matt Damon shaking his head and saying, “Isn’t it obvious why I dropped out?”

To be fair, Jeremy Renner gets behind the wheel of this cheap imitation and drives it as if his life depends on it. His performance is every bit as energetic, emotional, and engaging as his Oscar-nominated turn in The Hurt Locker.

He plays a very special agent named Aaron Cross, part of a top-secret American security program called Outcome, in which soldiers are assigned numbers, pumped full of performance-enhancing chemicals, and sent out to… what? Save America, I guess.

But when the program’s integrity is threatened, what the controllers of homeland security to do but pull the plug and kill off their own special agents? Thus, our Jason Bourne replacement has his own reason to hate his superiors, go on the run, and seek to frustrate his hunters for at least two hours of screen time.

You hear that, mothers and fathers of fallen soldiers? Your boys might not be dead after all. While the government calls them statistics, they might actually have become nameless super-soldiers… Replicants that will be switched off if their secrets get out.

For all of his stupendous stunts and stamina, Cross just don’t inspire the sympathy that Bourne did. He’s a battery-operated action figure fighting to replace his Duracells before he stops running. Where Bourne cared about his identity, his moral responsibility, and the consequences of his actions, Cross just cares about “chems.” Remember how the Jedi Knights ceased to be interesting when we learned that their powers were dependent on how many midichlorians were coursing through their veins? The “chems” are the midichlorians of the Bourne series.

As if this series’ relentless depictions of heartless American defenders weren’t troubling enough, The Bourne Legacy serves up a lengthy scene in which a solitary, troubled man flips out, grabs a gun, and starts shooting down people in an enclosed space. I’m not saying that scenes like this should never be staged, but when they’re included in a story that never pauses to consider the issues at hand… when they’re added almost arbitrarily, as if the movie is trying to meet its quota of memorably traumatic scenarios, well… it feels gratuitous at the very least.

It’s a bit baffling to realize that Tony Gilroy, who directs this installment, is the same guy who cooked up the first three Bourne screenplays, as well as the thoughtful thriller Michael Clayton and the thrillingly clever Duplicity. The scant attention that Legacy gives to its own ethical questions makes the previous trilogy seem profound. Held up against Gilroy’s other work, Legacy is downright bone-headed. It’s a movie about an adrenalin junkie for  adrenalin junkies. Moreover, by making drugs the secret to Aaron Cross’s success, the filmmakers heighten the implausibility factor. What was a big-screen world in which real-world scenarios and action-movie conventions were intertwined persuasively is now the land of comic-book superheroes.

Cross isn’t a man wrestling with ethical questions. He’s just a super-spy powered by chemicals, and when the drugs run out, he’ll stop at nothing to get more in order to escape the punishing meltdown. Yes, I’m tired of movies about heroes who must save the world from ticking time bombs, but I find it more than a little unsettling that the quest in this movie is achieved only if the hero knocks down everything that stands between him and another dose of steroids.

“Where are the chems?!” Aaron demands of Marta, the film’s only other two-dimensional character. Played by Rachel Weisz, Marta’s a frequently traumatized chemist who holds the secrets to Cross’s life-saving pharmaceuticals. “The chems!” he roars. “I need the chems!” (Get ready for that chem-related lines to become the most over-quoted movie lines since “I drink your milkshake.”)

How badly does Cross want those chems? So badly that he’ll shoot down drones and not even turn around to look at the explosion. So badly that he’ll wrestle a wolf. He’ll take on a SWAT team in an old house, armed with a fire extinguisher and a nail. He’ll fly to the Philippines and sneak into a pharmaceutical factory. Hey, I don’t blame him. But that’s a very feeble premise on which to build a story.

As if they’re desperate to prevent us from thinking about this story, the filmmakers work overtime to keep things moving, filling even the backdrops with chaotic activity. Nothing interesting happens in the vast pharmaceutical factory where the chems are kept, but that place sure fills the screen with color and motion! I don’t know anything more about the Philippines than I did going in except this: Manila provides quite a labyrinth for escapes from inept policemen.

It falls to Edward Norton and Stacy Keach to play the government monsters who stand in front of surveillance screens and glower as they play a humorless game of Where’s Waldo? Norton’s expression (he’s the one who should have been called “Cross”) suggests that he’s reflecting on how he blew his own chance to play a major role in this year’s mega-blockbuster, The Avengers (a movie that had more imagination, character development, and storytelling in fifteen minutes than this movie has in its full 135-minute running time).

Meanwhile, the appearances of such tremendous talents as David Straithairn, Albert Finney, and Paddy Considine are so fleeting that I wonder if they ever “suited up” at all. Might these performances be snippets culled from the cutting room floor of previous Bourne films? The most exciting moment in the film for me came when the wonderful Joan Allen looked like she might actually make an entrance. But alas, no… we barely get a glimpse of her.

If there is anything truly remarkable about this film, it’s how Renner and Weisz, whether they’re onscreen solo or together, actually make strong impressions. Weisz, who is for this moviegoer the most commanding English-speaking actress currently working, is given a damsel-in-distress role, but somehow commits as fully as she did in Terrence Davies’ The Deep Blue Sea earlier this year.

Nevertheless, by the time we reach the 90-minute mark, the story has run out of fuel, and we’re coasting on fumes. The Bourne series, once a thoughtful, character-driven action saga, is now the kind of series in which we spend two hours of convoluted plotting just to wrap up with the heroes facing off against the Bourne equivalent of a James Cameron Terminator. As if the filmmakers are deliberately turning their movie into a joke, they introduce a super-agent called — I kid you not — LARX. He’s Bangkok’s version of the Lone Biker of the Apocalypse. And when he arrives, the feeble heartbeat of the film’s narrative flatlines.

And so we get a climactic chase scene that will last for… what? Fifteen minutes? Fifteen minutes of waiting for either the bad guy or our heroes to go out in a blaze of glory… and we all know who it won’t be. Oh, it’s wild and crazy and fun to watch. But we’re just watching the movie pick up speed as it rolls downhill (for another 45 minutes!) toward an orgasmic crash scene. And then, what? There’s no story to wrap up, no character development to consider… nothing left to do but run the credits. Yes, The Bourne Legacy arrives at one of the most jarringly abrupt and anticlimactic conclusions I’ve ever seen.

So here’s what I recommend for Installment #5: The Bourne Bankruptcy.

In it, Matt Damon and Jeremy Renner play Jason Bourne and Aaron Cross. Together, these two exasperated super-agents will strive to bring down the program that’s exploiting them.

No, I’m not talking about the CIA or Homeland Security. I’m talking about Universal, the studio that goes on spoiling what started out to be a great series. Indignant, Jason Bourne will confront studio executives and say, “You built me up to be great character, and then you reduced my story into a program of endless chase scenes and increasingly preposterous exploits, until the audience that cared — once upon a time — about my character and conscience have nothing left to watch but action, action, action.”

Why not? Going “meta” is the only thing the Bourne franchise can do at this point to surprise us, because The Bourne Legacy has become as unsurprising and familiar as an old-school video arcade game. The hero knows what he wants, but he has to conquer several levels of the game to get it. Racing against time, dodging monsters, he strives to find and swallow the magic fruit. When he does, he’s immediately recharged, beaming, and ready for another round. And I’m fairly certain he’ll get one.

Meanwhile, this moviegoer has that strange, frustrating sense that he’s just plugged twelve dollars’ worth of quarters into an arcade machine and now he has nothing to show for it. And the game’s theme music comes on again as the machine resets itself. That Moby song? There’s nothing new about it either. 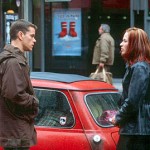 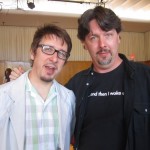