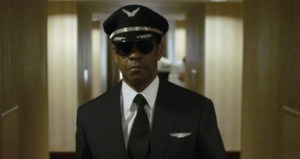 Robert Zemeckis’s Flight is the gunshot that starts the 2012 Oscar Race.

It has a big performance by Denzel Washington, one of the last old-fashioned movie stars. It spells out big, important, popular Oscar Season themes on banners across the big-screen. It has it all: Heroism, romance, comedy, garish supporting performances! It talks about faith a lot. It has a flashy performance by an up-and-coming actress as a junkie who, thank God, remains easy on the eyes throughout. And it ends with a courtroom scene designed to produce explosive emotion.

Paul Thomas Anderson’s The Master was expected to be the first big Oscar contender, but audiences found it too challenging and divisive to get them in the mood. No, Flight is the one that gives the audience all of those big, familiar Oscar Season feelings, and the race—ridiculous and meaningless as it is—has officially begun.

So… how to describe this movie? In a word: Turbulence.

Robert Zemeckis is a craftsman who seems to fancy himself an artist. His films are always energetic, lively exhibitions of big commercial American moviemaking. But in their eagerness to please, they end up smoothing all of the edges of what seems like a jagged idea. We get one-dimensional characters and plenty of popular stereotypes. (While Flight wants to seem bold in its Philosophy 101 questions about faith — “What kind of God would let this happen?” someone asks, a question I repeated after the movie — it includes the most ridiculously contemptuous caricatures of Christians you’re likely to see all year.) Zemeckis is always happy to ask the big questions in bold capital letters, but his answers are always about making people feel good, always about giving a lesson so blandly “right” that everyone can agree with it.

In short, his catalog of movies is like a box of chocolates: You may not know what flavor you’re going to get, but the rest of the experience is predictable. Each movie may be a little crunchy, but they’ll all melt in your mouth, giving you a fleeting sugar high, and then vanishing without any lasting benefit.

Flight is no exception.

Zemeckis shook up audiences with the frightful plane crash at the beginning of Cast Away (the one Zemeckis film I’m tempted to call an exception to my aforementioned description), and since that worked, he does it again with Flight.

It begins with a prologue hotel-room scene so rich with Nadine Velazquez’s nakedness that most men in the audience will be deeply satisfied by the movie right away, as well as intensely invested in her survival of what all know is coming. Women too will quickly become invested in the movie because, well, that’s Denzel Washington sprawled hunk-ily in the sheets.

This scene serves to show us everything we need to know about Washington’s character — Cap’n Whip: He’s an alcoholic (Wow, he starts his day by finishing off last night’s beer!) He does drugs. He sleeps with his sexy flight attendant. He’s insensitive to his ex-wife and is an irresponsible father. And moments later, he’s flying a plane with 120 souls on board. Our story’s moral flight path is clear. But don’t worry, despite its subject matter, it’s bound to be enjoyable; in spite of all these character flaws, Denzel Washington is just too darned charming for anyone to become terribly disturbed by his behavior.

Then, we get right to the scene that the previews promised. It’s a big-screen plane crash second only to United 93 for tension and calamity. It’s a crisis at 20,000 feet so unsettling that it may deliver a crippling blow to the airlines (and during a recession, at that!) over the coming months.

Leaving the audience exhausted from the ordeal, the movie starts striving to be About Something. I lost count of how many scenes are designed to amaze us with just how much Cap’n Whip can drink.

There’s an amusing scene in a hospital stairwell that brings together the handsome alcoholic leading man and the sexy drug-addicted leading lady, their Cupid an escapee from the cancer ward in the basement. (He is for cancer patients what Gary Sinise was for war veterans in Forrest Gump, a charming rascal who pushes our sympathy buttons.) And after that, everything is flashy and predictable.

We get the scene around the board room table that reveals the hard-heartedness of the airline executives and the conspiratorial nature of lawyers who are all about the money.

We get the scene when the alcoholic and the junkie find comfort in one another’s hotness. (Poor Kelly Reilly, cast as the junkie who’s really sexy, plays Rosie Perez to Denzel’s Jeff Bridges, but their relationship is never persuasive like the one  in Fearless. At least Peter Weir had the wisdom to keep from turning his survivor match-up into an impossibly sentimental romantic fantasy.)

We get the angel who is just Christian enough to be “cultural” and who exists to give our hero opportunities to reject wisdom. (But then she, along with other characters who deserve more attention, disappears.)

And we get caricatures — including the most amazingly naive and contemptuous caricatures of Christians I’ve seen this year. And when these caricatures do make an unexpected move, it makes no sense at all, unless we assume that the director is trying to seem unpredictable.

The soundtrack, on the other hand, is push-button predictable: “With a Little Help from My Friends” for drug-dealing; “Gimme Shelter” for drug-related high-living; “Sweet Jane” for the sad female junkie. Sell some soundtracks.

But the movie’s biggest problem is John Goodman — and I’m not talking about his girth. Goodman, once a welcome supporting actor, seems to have become too fond of the attention he gets for his flamboyant turn as Walter in The Big Lebowski. Here, as Cap’n Whip’s life-of-the-party drug dealer, he seems to think he’s in a Coen Brothers comedy, and his presence is jarringly incongruous with everything else. He demands our attention whenever he arrives, and all the other actors can do is stand back and wait until the storm passes. Somebody needs to cast him against type, and soon.

I’m making this sound like it’s a total waste of screen time, and it isn’t. All of the actors have admirable moments, especially Washington. There are several good laughs along the way. And the movie remains compellingly watchable, which is a surprise considering the fact that film never goes back into an airplane after the first act, nor does it rely on flashbacks. (For once, an American movie assumes that viewers have functioning memories.) I should also nod with approval at any movie that refuses to excuse an authority figure’s bad behavior, here in the age of Lance Armstrong.

But as the movie plunges like the opening-act airplane toward the inevitable courtroom drama and the big Oscar-clip moments (“Paging Melissa Leo for serious movie credibility!”), it strives to persuade us that it is serious-minded on the subject of addiction. Nevertheless, at every opportunity to consider the serious consequences of addiction, it anxiously veers the comic potential of a character being drunk or high, or dwells on the showier aspects — the trashed hotel rooms, the family photograph shattered by a vodka bottle thrown in a tantrum. And the last act crisis comes about because of a mind-boggling coincidence. (Apparently, when the god of addiction closes a door, he opens another where there really shouldn’t be one at all.)

And for all of its mention of faith, the movie can’t decide what, if anything, it really wants to say about the subject. It accept AA-meeting wisdom about our need to acknowledge a higher power, but it imagines that higher power as nothing more than Obvious Morality: Addiction and lying are bad. ‘Fess up and face the consequences like a man. Be a good dad. God bless America.

So Flight’s Oscar chances are good, its Best Actor nomination is secure (even though this is the closest I’ve seen Denzel Washington come to Bill Cosby-level mugging for the camera), and probably a Supporting Actress nomination as well. (In case you haven’t heard, sexy junkies get priority at Oscar time, second only to hookers with hearts of gold.) And with the adrenalin-rush thrills, sex appeal, a Requiem for a Dream drug-rush zoom on retina dilation, and courtroom sermonizing, well…  Oscar buzz, children, it’s just a shot away, it’s just a shot away. 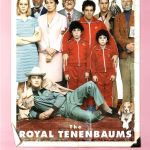 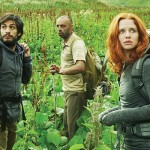 'Luck' Director Peggy Holmes on Jane Fonda, Whoopi...
In the new AppleTV+ film “Luck,” the unlucky-in-life Sam enters a mythical...
view all Entertainment blogs
What Are Your Thoughts?leave a comment