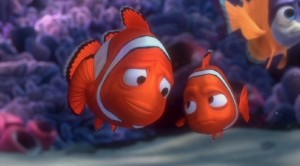 And Steven Greydanus of Decent Films and The National Catholic Register once wrote:

Andrew Stanton’s Finding Nemo is the best father-son story in all of Hollywood animation, and maybe animation generally. … [W]hat makes Finding Nemo so unforgettable, in my book, is Marlin. He stands virtually alone among animated father figures: not an idealized father, but a heroic and lovable one who is trying his best and whose faults, such as they are, are regarded with sympathy and understanding.

So… know what to do. Whatever your age, you’ll find that revisiting Finding Nemo is good for you.

I saw Finding Nemo four times in the theatre when it first came out, ten years ago. Each time was more exciting and satisfying than the last.

That was back in the days when we could count on Pixar to produce animated features far greater than any other studio. Pixar’s come a long way since then, and it’s not quite the magnificent operation it used to be. But how could things stay the same? They conquered the Magic Kingdom of Disney, taking a vast empire of properties old and new. And their chief imaginations went off to blaze new trails in both animation and feature filmmaking, with varying degrees of success.

Sure, Cars 2 was alarmingly bad, tarnishing the otherwise sterling reputation, and early reviews of Monsters University are not terribly encouraging. But when it comes to big-screen cartoons, they remain the most dependable magicians. .

Finding Nemo, which recently returned in a completely unnecessary 3D release, remains my favorite Pixar film… and depending on when you ask me, I might well say that this is my favorite animated film altogether. Enthralling, gorgeous, meaningful, and confident from start to finish, it remains one of a kind — the great animated adventure under the sea. None of its imitators come anywhere close.

And now, at the ten-year anniversary, I look back at my original review and I find that my respect for this film has only increased. (I also find that I was already eager, back in 2003, to try turning reviews into conversations, a tactic I’ve been taking more seriously of late.)

So here it is, restored to the blog after a long absence: my hastily written, original review. Consider it a glass raised — a toast to my favorite of Pixar’s standard-setting films. Happy Tenth Anniversary, Nemo! May your makers remember the magic that spawned you. May they keep it in mind as they assemble the (unfortunately) inevitable sequel. 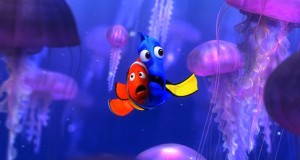 How far will a father swim to find his missing son?

That’s the question that drives Finding Nemo. But viewers will walk away asking another question: Are the folks at Pixar the most creative filmmakers — for children and adults alike — working today?

The answer seems to be yes.

Pixar’s animators are getting dangerous. You’ll gasp when you see what they can do with the reds of a sunrise on the undulating ocean waves. You’ll be in awe of their magisterial whales, sinister sea monsters, and shipwrecks.

And yet, realism is not what makes their work distinctive. These artists focus on making every frame such an exquisite work of art that any particular cel would be suitable for framing. Marlin, Nemo, and Dory are clearly cartoon characters, and yet they are so three-dimensional, so distinct in their expressions, movement, and personality, you feel like you could reach out and scoop them out of that widescreen aquarium. There’s no sensation at the movies this year quite like rushing up from the soft blue light of the sea’s depths and surfacing under a clear, striking, radiant Australian sunset. With Finding Nemo, Pixar has set a new standard, and at this point, no other studio can match it.

The screenwriters are in fine form as well. Pixar has seized the throne of family filmmaking not just because they’re the best animators, but because they pay such close attention to storytelling that their films end up being richer, funnier, and more rewarding than most films for grownups. Finding Nemo is not just the best family film of the year so far — it’s going to end up on a lot of critics’ lists of the year’s best films period.

It’s also a very complex film emotionally. The story follows the adventures of a clown fish named Marlin. Marlin lives in a crowded aquatic community on a technicolor coral reef, where he is trying to protect his son Nemo from the dangerous of the open sea. Marlin has good reason to be cautious. The film’s opening scene demonstrates just how damaging the terrorists of the sea can be. (Caution, parents: This scene is about as troubling and intense as that famously heartbreaking scene at the beginning of Bambi.) Later, when Nemo gets kidnapped by unexpectedly powerful foes, Marlin must overcome his fears of the vast ocean in order to find his son.

Nemo has a few lessons to learn as well. You see, Nemo was captured while disobeying his father’s—

You’re saying too much!

Ladies and gentlemen, please forgive the interruption. We have been joined by the voice of a very enthusiastic cartoon fan: my 7-year-old self. He’s still alive and well in the heart of this 32 year-old film critic. He’s the one whose world was changed by Star Wars, who had posters of The Secret of NIMH and the Muppets all over his wall. Little Jeff doesn’t care a whole lot about the finer points of the animation as long as the story is compelling and the characters are cool.

I liked it a lot!

You certainly seemed caught up in the movie!

It was awesome. I want to see it again.

Yeah. And I’ll go with you.

What was your favorite part?

My favorite part was the scene when Marlin’s journey through the ocean becomes famous. The story of his amazing escapes and discoveries begins to spread, and we listen to the legend grow as it is passed from one creature to the next. In one glorious minute, we catch glimpses of so many creatures, so many environments. It’s absolutely breathtaking. We may not see a more accomplished flourish of storytelling all year.

I liked the seagulls. They were my favorite part.

The seagulls were cool, weren’t they? Living in Seattle, surrounded by these annoying, brutal, selfish birds, I have often thought somebody should make a movie that gives them what they deserve. Leave it to Pixar to figure out the essence of these screeching clamoring pests and give them their most perfect big screen manifestation.

But this is a movie about fish, not birds. I’m convinced the animators spent a lot of time underwater-or at least watching the BBC’s Blue Planet television series over and over again.

I liked the coral reef. It was like a big… city. And there are just hundreds of different fish and anemm… ammen….

Yes. Did you like the voices of the characters? 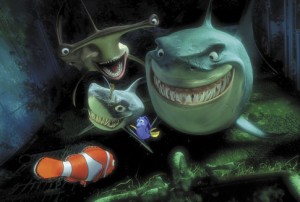 The shark had a funny voice.

They do the voices of Nemo, his father Marlin, and Marlin’s forgetful friend Dory, the blue fish that helps him. They’re the best voice/character matches since Woody and Buzz.

Dory’s always forgetting things. Like the name of the place they’re trying to find!

Yes. And in most movies that would have become an annoying thing, but somehow DeGeneres makes it work. The gag stays funny.

Yeah. And I liked Crush the turtle. He was my favorite part. He kept saying, “Duuuuuude!”

What? How do you know about Lebowski? Have you been watching movies you shouldn’t?

I liked everything in this movie!

Did you? I liked most things, but not everything.

Okay. I’m glad. But for me, there were too many chase scenes. It all moved too fast.

Well, maybe you’re right. I need to see it again. But it felt like writer/director Andrew Stanton tried to pack too many adrenalin rushes into the film. It’s “a-crisis-every-minute” narrative hurts the pacing, so that the big finale feels like just another big obstacle to overcome. Stanton makes us feel like we’re strapped into an underwater rollercoaster. I wished I had a remote control so I could slow things down and drift through these gorgeous underwater environments.

But you can use the remote control!

No, kid. They don’t have those in theatres.

Noooo…noooo… I’m talking about the DVD. You’ll get the DVD, and then you can just slow things down whenever you want.

Good point. And I’m not really too upset about it. I mean, in these days of spectacle over story, who can really complain about a movie with too much story?

And it’s also a pretty heavy movie for Disney. The storytellers take on heavier issues than we’re used to. The vulnerability that these little fish feel reflects our own reality… especially life after 9-11. Even happy neighborhoods can go suddenly silent, everybody fleeing into their holes, when a shadow passes overhead. The whole audience was silent during that opening scene. And yet, the movie is about learning to live life to the fullest in spite of those dangers. Marlin really has to learn how to live all over again. He does so by building friendship and trust.

Finding Nemo is a surprisingly emotional film. I felt a lump in my throat, and that just doesn’t happen much anymore.

I wasn’t scared at all.

So you think moms and dads should go ahead and take their kids to this movie?

Well, maybe it’s too scary for really little kids. Littler than me. They might want to have their mom or dad come with them. You know, to hold their hand, in case they get scared. 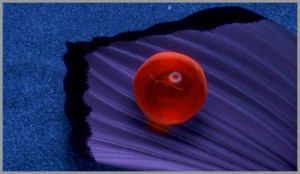 I was especially moved by the picture of Marlin cradling Nemo when he was still a baby… still in the egg! We see that unborn baby, we know its importance, and we learn its potential. That’s an image that will be unpopular with some viewers, but it is important to see and talk about.

Similarly, there is a scene involving commercial fishermen in which the audience is clearly rooting for the fish to escape. The film does not paint fishermen as evil, but it does raise questions about responsibility and resources. Some of the world’s most important sea species, like tuna, are disappearing rapidly because of pollution and because of insufficient controls on commercial fishing. The attention to detail and the apprehension of beauty in this film could not come at a better time. It reminds us of the beauty of what God has given us, and how responsible and respectful we must be.

It also teaches us that dentists should be careful!

Hey, be careful. Now, you’re in danger of spoiling the story! 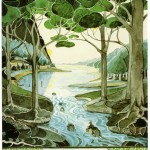 June 11, 2013 The Desolation of "The Hobbit"
Recent Comments
3 Comments | Leave a Comment
Browse Our Archives
Related posts from Looking Closer

3 responses to “Finding Nemo: This Fish is Still Fresh”