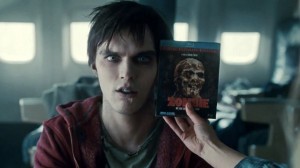 Well, it could be that zombie movies have finally eaten my brain, but I think this movie has an honest-to-goodness heartbeat.

In most zombie movies, plot is secondary; the movie is made as an excuse for frenzied violence and gore. Whimsical, clever, and sometimes downright silly, Warm Bodies works because it is, at heart, a “Beauty and the Beast” story that is interested in finding meaningful possibilities in undead cliches, rather than indulging in standard-issue excess. It knows that less is more.

Further, it has the courage to be a comedy. We have far too many zombie movies taking themselves too seriously. The field is so overcrowded with lurching flesh-eaters that you’d better have a damned good idea if you’re going to add yet another movie to the heap. Isaac Marion’s novel gives Jonathan Levine just enough good ideas to justify every minute of this bite-sized film’s running time.

And it’s smart. Smart enough to keep its tongue firmly fixed in its bloody cheek. Smart enough to tease us with Romeo and Juliet references (“R” and Julia, if you will), but not to overdo them.

There are a few notes I would have given Levine before the final cut. The iPod Shuffle soundtrack turns the movie into a commercial for its accompanying album. The resolution seems to come too easily. And really, did we need John Malkovich for this part, which asks so little of him?

But the young cast members strike just the right balance of comedy and angst. Nicholas Hoult and Teresa Palmer manage to find quick, convincing chemistry through the Halloween-costume makeup and the usual “Wait, how does zombie science work?” lunacy. It’s good to see Analeigh Tipton, who made a strong impression in Damsels in Distress, but I wish they’d done more with her character here. And what do you know… I was even impressed with Rob Corddry, who succeeds by underplaying R’s zombie BFF.

Now, before anybody complains that it’s not scary enough or gory enough to be a great zombie film, or that the PG-13 restraint is a cop-out designed for big box office, let me make another pitch for this film…

I’m always looking for great films for children. Once in a while, I find one, so I keep looking. But great films for 13- or 14-year-olds? Good luck. They’re so few and far between that I rarely ever look. Most of them rely on locker-room humor and sophomoric sex comedy. Warm Bodies avoids gratuitous gore and excessive profanity, and chooses sweet-spirited young love over hot-and-bothered frivolity. And, while overbearing social commentary is standard for the genre, this one has fun with it. (I even laughed at the obvious jab at zombies who read magazines with Kardashians on the cover.)

All in all, a film I’d be happy to share with teens and interested to discuss with them afterward. Don’t set your expectations too high: It is, as others have described it, a “zom-rom-com.” But I’d rather watch this ten more times than Twilight a second time. 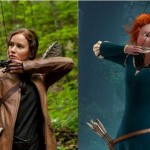 June 5, 2013
Has the Power of the Ring Corrupted The Hobbit's Filmmakers?
Next Post

June 9, 2013 The Bard on the Big Screen: Much Ado About "Much Ado," "Shakespeare in Love," and More
Recent Comments
4 Comments | Leave a Comment
Browse Our Archives
get the latest from
Entertainment
Sign up for our newsletter
POPULAR AT PATHEOS Entertainment
1

Movies and series about Ultra Orthodox Jews beginning...
With the huge success of Netflix's three season series "Shtisel" there is...
view all Entertainment blogs
What Are Your Thoughts?leave a comment