What Do 2013’s Most Stylish Vampires Have in Common with Johnny Depp, Tom Waits, and Bill Murray?

What Do 2013’s Most Stylish Vampires Have in Common with Johnny Depp, Tom Waits, and Bill Murray? June 1, 2013 Jeffrey Overstreet 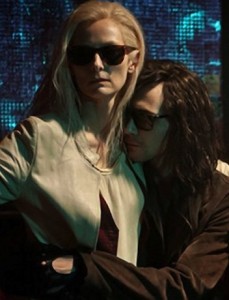 In a few months, vampires will prowl on the big screen again.

This may sound like unremarkable news. How many vampires have we seen on the big screen in recent years?

But these approaching vampires aren’t your ordinary bloodsuckers. Nor are they the sentimentalized, sparkle-chested fakes from Twilight land. Their names are Adam and Eve. They’re played by Tom Hiddleston (The Avengers, The Deep Blue Sea) and Tilda Swinton. They stirred up some rave reviews at the Cannes Film Festival in May. They rise from the imagination of one of my favorite filmmakers — Jim Jarmusch.

If you’re not familiar with Jarmusch, you can read my two-part study of his substance and style. Part One, “Jarmusch 101,” is here. Part Two, which is my review of The Limits of Control, is here.

You could also just dive in and watch his movies. I’d recommend that you start with my favorite — Down By Law — which stars John Lurie, Tom Waits, and Roberto Begnini as prisoners forced to share the same cell. The Criterion Collection edition is fantastic.

And here, for the first time on my own site, is my review of Broken Flowers. This review was originally published at Christianity Today back when the film opened in 2005. 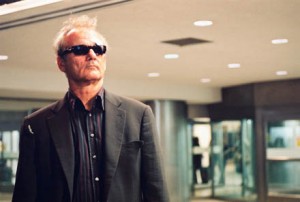 Bill Murray, under the direction of Jim Jarmusch, declares the beginning of the end of the summer season of blockbusters by delivering August’s first high-profile American art film: Broken Flowers.

It’s time, at last, to bring our focus back to films made for grownups … one that offers us three-dimensional human beings whose stories invite us to pay attention and think things through. Broken Flowers is a story about the deep sadness, regrets, and scars of a man who has neglected what some would call “family values.”

Don’t misunderstand — the movie is fun. Jarmusch will jolt you with big laughs, the sort that have earned him a loyal following through previous works like Stranger Than Paradise, Down by Law, and, most recently, Coffee and Cigarettes.

Don Johnston (Murray) made his money “in computers,” and yet money hasn’t bought him true love or joy. We’re given hints of his younger self — the nickname “Don Juan” follows him around more like a curse than an honor. His dalliances with various lovers ended in disappointment. When we meet him, his latest girlfriend Sherry (Julie Delpy) is, in fact, leaving. With Don’s face in profile filling the right side of the screen, we see Sherry standing with her suitcase in the entryway, as though inside a thought bubble — an echo of so many past departures. He’s left staring despondently past handsome furniture into oblivion, sullenly resigned to another failure.

Enter Winston (Jeffrey Wright), Don’s meddling neighbor. Winston’s a family man who has discovered “the Net” and is indulging his interest in detective work. Another director might have cast Luis Guzman in the role, and that would have worked. But Wright, a powerfully versatile actor who made strong impressions as a violent gangster in the re-make of Shaft and as the traumatized war veteran in the re-make of The Manchurian Candidate, plays Winston with note-perfect humor and an Ethiopian accent. Winston’s just dying for a mystery to solve, and Don unwittingly serves one up.

A pink envelope brings a shock to Don’s system: he’s apparently the father of an eighteen-year-old son. The letter isn’t signed. Don, being Don, responds by bravely digging another furrow across his brow. But Winston’s enthusiastic — near-hysterical — response involves a different kind of digging. Before Don can effectively protest, Winston gathers the tools necessary to solve the mystery.

Here, you’re likely to share Jarmusch’s tangible reluctance to tear Don away from Winston. Their casual chemistry is the film’s richest resource of humor and nerves. But the show must go on, and so we’re off on the Odyssey of Don: a trip down memory lane, the major points on the map being the current locations of his lost loves. Those failures are played by Sharon Stone, Frances Conroy, Jessica Lange, and Tilda Swinton.

Stone, making up for her embarrassing turn in Catwoman, is at once funny and painfully sad as Laura, a shallow but free-spirited widow and the mother of a dangerously ditzy teen. Appropriately named Lolita (Alexis Dziena), the daughter’s eagerness to full-frontally flaunt her adolescent comeliness for Don is the primary reason for the film’s rating.

Dora (Conroy) has entombed her regrets in a pile of stylish throw pillows and pristine home furnishings, her ’60s ideals lost in a superficial marriage and a career as a pre-fab home seller.

Exquisitely strange, Carmen (Lange), guarded by a venomous and psychotically overprotective secretary (Chloe Sevigny, of course), has the most unusual occupation — that’s best kept as a surprise.

And as a monster spewing bile and bitterness, Tilda Swinton is so scary, it’s hard to imagine she’ll be any more dangerous when she plays Narnia’s White Witch.

Each encounter reveals more of the history behind Don’s defeated demeanor. And, during another visit, in a scene of rain, bruises, and defeat, Murray breaks our heart with an expression that may be the most affecting moment of his career.

Broken Flowers is the reverse of Murray’s zany classic Groundhog Day. In Harold Ramis’s comedy, Murray got to relive the same day over and over, behaving differently while circumstances and surroundings stayed put. Here, his surroundings keep changing, but he maintains the same reluctance and stoicism throughout, so beleaguered by his mistakes that he can’t muster the energy to pursue a thing.

To regular moviegoers, it will feel like an art film; to art house patrons, it will feel mainstream. They’ll both be right. It’s a film that follows a simple storyline, and yet seizes every opportunity to turn a cliché into something slightly dissatisfying, slightly sour, with deep emotions and complicated thoughts running in barely perceptible currents under the sparse dialogue. With the help of Frederick Elmes’ graceful cinematography, Jarmusch is a true artist who never steers matters toward an obvious lesson, inviting us to arrive at our own interpretations.

But it is interesting that the only glimmers of real joy in the film can be found in Winston’s thriving family. During Don’s four-city tour, he finds former flames in various phases of dissatisfaction or delusion. Glamour? It fades and reveals the emptiness beneath it. Success? It’s no substitute for contentment. New Age hocus-pocus? Yikes. The continual misapprehensions of Don’s real name (“Don Johnson?”) bring to mind a popular ideal of the stylish, confident American male. This, we might conclude, is where the path of the macho seducer ultimately leads — to ruin, regret, and rumination on what might have been. Don’s journey peels back the surface of so many American dreams to find them wanting, while Winston, dodging his kids and doting on his “perfect” wife, seems as rich as a king.

Broken Flowers has only one thing working against it: Murray’s been playing sullen, withdrawn characters a bit too often. The fact that we’ve recently seen him sulk through Rushmore, The Royal Tenenbaums, Lost in Translation (still his finest performance), and The Life Aquatic with Steve Zissou (another film about a man discovering fatherhood too late), blunts the impact of this, another brilliant performance.

Nevertheless, Broken Flowers‘ conclusion will send audiences out talking about what it means. But take note: Only the watchful will perceive the subtle significance of that final shot. It finally resolves the central tension of the story. Some critics are missing it, concluding that Don is doomed to the doldrums of disillusionment. But there is a crucial difference in the “hero” during our final, poignant glimpse of him. To say more would be telling, but it could be the key to his redemption.

So, do the film’s fleeting moments of explicit content make it entirely unacceptable? That’s for each viewer and their conscience to decide. Mature viewers who give Broken Flowers a chance may find themselves refreshed by a movie that invites them to ponder their own regrets and to contemplate the possibility of redemption and grace. That’s a nice change from films that treat us like thrill-seeking children (Michael Bay’s Island, anyone?). Where Hitchcock insisted his films were not slices of life, but slices of cake, Jarmusch’s are savory servings of life, and they deserve to be treated as delicacies.

June 1, 2013 Want to Go to Jerusalem with Benedict Cumberbatch?
Recent Comments
2 Comments | Leave a Comment
Browse Our Archives
get the latest from
Entertainment
Sign up for our newsletter
POPULAR AT PATHEOS Entertainment
1

2 responses to “What Do 2013’s Most Stylish Vampires Have in Common with Johnny Depp, Tom Waits, and Bill Murray?”