Today, I’m grateful for many things. Here are a few of them…

After an evening in Kingston, Washington, last weekend, Anne and I stood on the deck of a ferryboat, waiting for the ride home. It was warm. The light was beautiful. We were quiet and watchful.

And then Anne said, “Do you see the piano keys?”

And I looked closer.

And I saw them.

As a good friend once said, “All of it was music.”

Thank you, Anne. I am grateful that I get to spend my life with you.

I am so grateful that I have the joy of working on this campus.

Flip through this amazing slideshow prepared by my coworker Eric Crissman. Move the slide-bar back and forth, and enjoy watching my workplace transform into the beautiful place that it is today. I’m going to spend some time working outside today.

Elijah, who is responsible for Reel Spirituality, took me to lunch right here in my own town, and we got to talk about our strange employment histories, and how we juggle writing about film and working in higher education. I’ve enjoyed his writing, and I love meeting people I got to know online.

This excellent review by Boone has persuaded me to see the movie. Fruitvale Station sounds like it’s about as timely as a movie can be.

Thank you, Tasha Robinson, for highlighting one of my action-movie pet peeves, which apparently rears its ugly head in Red 2. She writes,

In 2010’s RED, retired CIA specialist Frank Moses (Bruce Willis) and pension caseworker Sarah Ross (Mary-Louise Parker) launch one of the creepiest romantic relationships in modern action cinema, which is a high bar to hurdle. When Frank’s black-ops past comes back to haunt him, he decides his enemies might target Sarah based on his mildly positive phone conversations with her, so he kidnaps her, knocks her out, keeps her tied up, hauls her into danger rather than out of it, and mercilessly patronizes her for protesting, until she eventually falls for him. It’s the exact same plot as Pedro Almodóvar’s Tie Me Up! Tie Me Down!, except with more gunfire, and without the faintest pretense that there’s anything wrong with abducting a woman in hopes that Stockholm Syndrome will set in hard.

Thank you, Wonders in the Dark.

You’ve made my 2013 must-see list more interesting with your 2013 half-time report.

Noel’s piece on movie novelizations has brought back a flood of memories from my childhood.

Did you ever read a “movie novelization” before you saw the movie? No, not a novel that became a movie… but a movie that became a novel.

I experienced Raiders of the Lost Ark, Star Wars, The Empire Strikes Back, Return of the Jedi, E.T. The Extra-Terrestrial, Witness, and many other movies as books before I saw them in theaters. The first time I ever stood up in front of my class to give a book report, I reported on reading the novelization of Witness. The novelization of Ladyhawke ends very differently than the movie; I remember being aggravated by that. Midnight Run is quite different from the film as well.

In some cases, I remember reading the book because I wasn’t allowed to see the movie. (Either it was rated R and I was too young, or my parents and my church community worried that the movie would be too scary or dangerous.) But the books were almost always more extreme, painting even more vivid pictures in my head. And sometimes, even in the case of Raiders of the Lost Ark, they had sex scenes where the movie had none.

Thanks to my coworker Jane Hur.

She sent me these two wonderful slideshows that set a new gold standard in food criticism.

Thanks to my dear friends, high school teachers Nate and Lindsay Marshall.

Nate and Lindsay are spending time with me and Anne this weekend, a rare occasion, and we plan to fill up the time with good things. Lindsay was extraordinarily encouraging to me as she wrote about my novels over the past few years. That led to conversations and friendship. It’s a rare thing, to find a kindred spirit, and it’s a rare thing for a couple to find another couple of kindred spirits.

Here, by the way, is Lindsay’s review of The Lone Ranger. As a history teacher, Lindsay was particularly interested in this one. 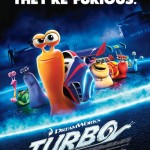 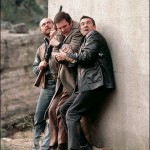 July 20, 2013 25 Years Ago Today, Walsh Got the Duke
Recent Comments
2 Comments | Leave a Comment
Browse Our Archives
get the latest from
Entertainment
Sign up for our newsletter
POPULAR AT PATHEOS Entertainment
1