Angela Tucker Found Something on Facebook That Changed Her Life

Angela Tucker Found Something on Facebook That Changed Her Life August 21, 2013 Jeffrey Overstreet 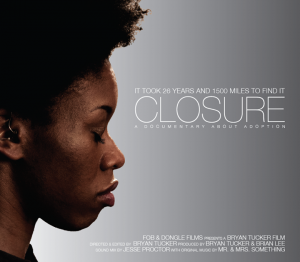 Ask about “Sandy the Flower Man” in Chattanooga, Tennessee, and the citizens will tell you stories. He’s a lively and well-loved local who bicycles up and down Main Street, giving flowers to women and smiles to everybody.

But when Angela Burt Tucker found his Facebook page in 2010, she knew she was looking at more than a friendly stranger. He had her smile. And what’s more, his real name matched that of her birth father: Oterious Bell.

Angela had found the first big piece of a puzzle she’d hoped to put together since childhood.

As Angela looked into this mystery, somebody else was looking at her through a camera: her husband, Bryan Tucker. Bryan was making home movies, intrigued by what was unfolding. But what happened next would persuade him to make a documentary called Closure, detailing how Angela’s decision to find her birth parents led to a surprising reconciliation.

The preceding paragraphs are the beginning of a piece I’ve written for Response, a magazine published by Seattle Pacific University. For those who don’t know, I work as a contributing editor for that magazine, and that’s only about 10% of what I do at my Seattle Pacific day-job. I give most of my time and energy to SPU for the love of that institution.

The rest of my time and energy and passion, I divide between my marriage, my fiction-writing, my film-reviewing and blogging, and teaching.

Rarely do all of those worlds fuse together into one. But in this case, they did. I was writing a narrative, I was having an adventure in investigative journalism, I was writing about a movie, I was celebrating marriage and family, and I was also celebrating the extraordinary community that is Seattle Pacific. It was a thrill and a privilege.

Read the whole story here. It gets wild.

I’m grateful that I was the one assigned to cover it. I was blessed by the investigation, I am blessed by the friendships that have come from it, and I will be blessed even further if you enjoy.

August 20, 2013
A Coen Brothers Concert and a Line-Up of Must-Play New Releases: Are You Listening?
Next Post 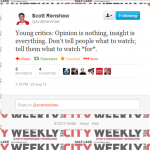 August 22, 2013 The Quotable Renshaw
Browse Our Archives
get the latest from
Entertainment
Sign up for our newsletter
POPULAR AT PATHEOS Entertainment
1