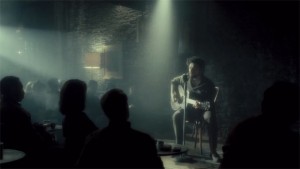 He stares into the camera, so shaken by the beauty of the music he’s just discovered that he appears to be in anguish. This music, he says, was “filled with such longing, such unfulfillable longing, it had me trembling.”

His name is Salieri, and in Milos Forman’s beloved film Amadeus, he is played by F. Murray Abraham.

Why am I talking about Amadeus when this is supposed to be a review of Inside Llewyn Davis? Stay with me. It’s important.

I first saw Amadeus when I was fourteen, and it really rattled my teenage mind. For the first time, a movie made me ponder how the most sublime art can burst like fireworks from the minds of criminals, losers, and fools — while those who hold the power, the keys to fame and fortune, have a tendency to either corrupt, exploit, or fail to recognize genius. Wolfgang Amadeus’s glorious art brought out the worst in Salieri, who had dedicated his life to music. He despised this intolerable party animal who was, in his opinion, unfairly blessed. He jealously sought to ruin him. In the end, Salieri became a champion of mediocrities around the world.

Critics around the globe are heralding the new film by the Coen brothers as a masterpiece — and some are even calling it the best picture of 2013. But I wonder what Salieri would have thought of it.

Would he have laughed, thinking of Wolfgang, as he watched Llewyn Davis, a talented folk musician, suffer one misfortune after another? Davis is a fine example, after all, of someone who shines in the spotlight, but lives a miserable life in the shadows beyond. Or would Salieri have sympathized, relating to Davis’s doomed attempts to break through and become a success?

For many months before it opened to raves at the Cannes Film Festival, film enthusiasts have been buzzing about how Joel and Ethan Coen were setting their new film in 1961, in Greenwich Village. The possibilities were intriguing, as that’s the time and place when folk music broke through the barriers of commercial pop music, led by Bob Dylan and other inspired voices, to become a powerful force in American culture. Rumor had it that the film would be loosely based on the life of a towering figure in that chapter of American music: Dave Von Ronk.

Although the Coens admit that Von Ronk did influence their thinking as they crafted this, their sixteenth film, no — despite all the buzz, this is not a celebration of legendary figures or a nostalgia trip. It’s something quite unexpected.

Sure, it’s full of fantastic music, masterfully produced by T-Bone Burnett and performed with effortless grace by a remarkable cast that includes Justin Timberlake, Carey Mulligan, and Adam Driver. And in the sharp contrasts between what was popular in 1961 and the gutsier, rough-edged style that was about to break through, we can see why America needed a musical revolution.

But ultimately, even though one important historical figure does make an appearance at the end of the movie, Inside Llewyn Davis is primarily a character study. In fact, of the Coens’ sixteen films, only The Man Who Wasn’t There is so focused on a single figure. The Coens have told many stories of losers and fools stumbling through hard times, but they rein in their wilder, wackier impulses here. Inside Llewyn Davis mopes its way through bogs of bitter irony and murky misfortune, its melancholy enhanced by the muted colors of Bruno Delbonnel’s exquisite cinematography.

In fact, for a film that almost qualifies as a musical, this is the quietest Coen brothers movie. Rather than making a stylistic sequel to O Brother Where Art Thou?, they’ve dialed down their famously quick and idiosyncratic dialogue so much that this film feels strangely heavy, smoky, and spacious. 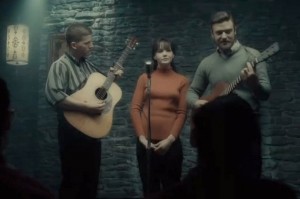 Most of the heavy silences reflect the deepening despair of Llewyn himself. Llewyn, played by Oscar Isaac in a tremendous performance, often looks like the iconic American folk musician, striding through album-cover-art environments with his guitar — his weapon, his talisman, his reason for living — in one hand, and an orange tabby cat in the other.

Llewyn places his hopes in that guitar. It seems to be the only thing he has to offer the world: skillful, poignant music and soulful songs about loss and death. It’s also the only meaningful way he knows to earn his keep, or at least to try and pay his debts. The only other option available to him, it seems, is to join the merchant marines.

But the cat is just as important. The cat is a burden that Davis carries with him — an accident, a mistake, a loose end that he just can’t seem to tie up. And we learn that there are plenty of those in his life. As half of a promising duo, Llewyn enjoyed some fleeting attention; but that magical musical partnership ended tragically, and the loss has become the core of the black hole in Llewyn’s heart. Now he works for an agent who doesn’t do him any good. Given a chance to sign on for future royalties on a session recording, and he chooses to take quick cash instead… a choice he’ll come to regret.

And the worst of his problems are related to women.

Especially one woman: Jean (Carey Mulligan in a fierce performance). Jean, the wife of Llewyn’s friend Jim, is pregnant, and she thinks Llewyn is the father. Hell hath no fury like the wrath of an ambitious folk-singer woman who finds herself “in trouble,” and Llewyn, being a bastard on almost every level, is quick to recommend an abortion… something he’s clearly done before.

When Llewyn sings, we want to see him succeed. When he does just about anything else, we want to punch him in the face. (Don’t worry. Someone does.)

Reflecting on the movie, I recalled the words of Orson Welles: “I think the ‘self’ is a kind of enemy. My work is what enables me to come out of myself. I like what I do, not what I am. … Do you know the best service anyone could render to art? Destroy all biographies. Only art can explain the life of a man — and not the contrary.”

I think Llewyn would agree. You can see it in his face as he runs from his responsibilities; as he borrows money from people he’s quick to hurt; as he listens to a heroin-poisoned jazz man (John Goodman playing his ugliest character yet) mock the music he lives by. Llewyn’s life is not worth living… not unless he can sing. And when he sings, he’s carried up outside of himself, elevated by the beauty.

Will he ever get to do for a living that thing he believes is his purpose? Will he ever be appreciated the way he was when his partner was around?

As he trudges in snow-soaked shoes into Chicago, he pins his hopes on a meeting with an influential club owner — a gatekeeper named Grossman.

Grossman. This is the moment toward which the whole film has been moving. Llewyn has played unrewarding gigs. He’s been a session guitarist for painfully cheesy pop tunes. But now he gets to pour out his heart and soul for an industry gatekeeper. 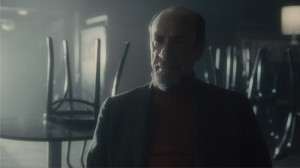 You can’t tell me that the Coens weren’t smiling when they cast Abraham in the role. There he is — Salieri — alive in 1961 like some kind of demon! Does he reach out to this suffering singer? Does he jealously complicate his progress? Or is he dedicated to a system that exalts mediocrity and kicks beauty in the gut?

I’ll let you find out what happens.

Grossman’s response rings out like an explosion. But don’t overlook the performance that provokes it. Llewyn sings like his life depends on it. His voice may not be a marvel, but it can be as melancholy as dusk and as bright and clear as a February morning. He may be a fool. He may be a disaster. But he can turn pain into glory.

Idolizing artists seems as American as pledging allegiance to the flag. But it’s a distraction. The music is what matters. Inside Llewyn Davis reminds us of that. It also reminds us that such vivid expressions of longing catch our attention because they sometimes come from those who are carrying the most pain, the most desperation for salvation… from the dead ends of the world and the folly of their own hearts.

In the end, the artist is — to steal from the big-deal song of the season — “just a reflector.”

Or, as Annie Dillard wrote in Holy the Firm, “There is no such thing as an artist: there is only the world, lit or unlit as the light allows. When the candle is burning, who looks at the wick? When the candle is out, who needs it? But the world without light is wasteland and chaos, and a life without sacrifice is abomination.”

If there is any hope for Llewyn Davis, it’s that his art will bring him some illumination. Or at least a paying gig. 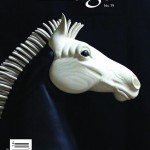