Is Chef the Greatest Movie Ever Made About Sandwich-Making?

Is Chef the Greatest Movie Ever Made About Sandwich-Making? September 20, 2014 Jeffrey Overstreet 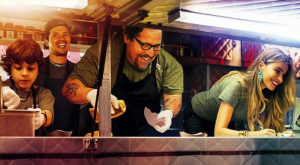 What are the greatest movie moments that involve sandwiches?

I’d have a hard time imagining one that I love more than the moment in Wild at Heart when Dell (Crispin Glover), caught piling up sandwiches in the kitchen at midnight, shouts “I’m making my lunch!”

But that one doesn’t really make me want to make and eat a sandwich. The scene in Spanglish, where Adam Sandler makes what just might be the finest sandwich in the world, certainly does. If you can think of a better one, post it in the Comments below.

I raised this question on Twitter, and got some interesting answers. One recalled William H. Macy making sandwiches in Mystery Men as “a pivotal sandwich moment.” Another posted: “There’s a moment in Con Air in which convict with a heart of gold Nic Cage stops to make a sandwich during a gunfight.” Excellent.

Last night, I saw film that servues up some strong contenders for Best Sandwich-Making Scene: Chef. I watched Jon Favreau make a grilled cheese sandwich for his son, and then I watched him grilling Cubanos in a food truck. And I wanted one so badly I was tempted to leave the theater.

You can’t get much more formulaic than a Cubano. But if it’s made with love, with high-quality ingredients, and the right equipment, it can be something amazing. Just look at the line outside of Paseo’s in Seattle, and you’ll see.

And speaking of formulas: You can’t get much more formulaic than Chef — a heartwarming tale of a gourmet chef who makes a big mistake, “falls from grace,” and then has to overcome his self-doubt and depression in order to reboot his life and find his way back to what gave him a love of cooking in the first place. It’s hard to believe that Anchorman didn’t kill that formula for good, but here we are. And lo — it still works.

Jon Favreau — best known as a director of formulaic action-adventure hamburgers like Iron Man (pretty tasty), Iron Man 2 (similarly tasty, but larger), and Cowboys and Aliens (I took a few bites and then threw the rest out) — seems eager to regain his integrity as a filmmaker here. So he casts himself in a story that might be a sort of self-fulfilling, autobiographical allegory. He plays “Chef Casper,” a gourmet chef who runs a tight ship full of admiring, congenial, curse-happy cooks in a Los Angeles restaurant owned by a bone-headed, strong-willed jerk (Dustin Hoffman). When a food critic shows up and Casper finds his artistic aspirations body-blocked by the owner, the results are predictable, and so is the calamity that befalls Casper.

Just about everything else is predictable too. He’s divorced from his glamorous wife (Sofia Vergara), and he’s losing touch with his boy (Emjay Anthony). Maybe the best thing to do would be to spend some time reconnecting with the broken family unit. In Miami. Where somebody happens t have a broken-down food truck. And who doesn’t love cuban sandwiches?

It kind of writes itself, doesn’t it?

If you’re looking for something in Chef to complain about, you’ll find plenty. Did Ratatouille cover this thematic territory more fully and meaningfully? Yes. And isn’t is kind of icky that Favreau casts himself in the lead and then casts Sofia Vergara and Scarlet Johansson as his two love interests? Uh-huh. (And neither of those performances are anything to get excited about either.) Does a certain action-hero superstar’s small role as a conversational multi-tasker come across as gratuitous? Kinda.

And one of the film’s emotional peaks steals an idea from an iPhone commercial.

But I’m inclined to be kind to Chef.

No, not because it almost makes a villain out of a critic.

No, I like Chef because it’s warm-hearted without ever overcooking its moments of high emotion. Here’s a movie that provides easy uplift for Friday night moviegoers, and it does by building its big-screen sandwich out of quality ingredients, color, flavor, humor, and life. It pulls back from dwelling on the formula’s obligation to be sentimental. And it refrains from steering the story toward the crowdpleasing moment when a villain is humiliated.

It has Bobby Cannavale. It has John Leguizamo. It has Oliver Platt.

And it delivers one of the most substantial and endearing father-son relationships we’ve seen on the big screen in a long time. It’s fun, and it’s fast — one of the best-edited pieces of commercial entertainment I’ve seen in a long time. In fact, when it finally hits that major chord that resolves everything, the moment lasts only a couple of moments, and boom — the credits roll.

I should add that just as I cannot separate my memories of favorite meals from my memory of the environments in which I enjoyed them, my enjoyment of this film had a lot to do with the rare and wonderful circumstances in which I saw it.

I saw Chef the way it should be seen: On a big screen in an old-fashioned movie theater — the Landmark Crest Cinema Center ($3 a ticket!), built in 1949, one of the first theaters in the country to show Close Encounters of the Third Kind in 70mm — with a local community who were in the mood for a casual Friday comedy.

Yes, the floors were a little sticky and the air was full of butter flavoring. Yes, everybody laughed at the obvious jokes. Yes, everybody cheered at the 2+3=5 storytelling. Yes, more than one person spilled candy across the floor. Yes, a young couple sat way over by the wall and made out the whole time. Yes, people got a little too excited about certain glamorous movie stars who showed up for bit parts as favors to the director… like Broadway stars showing up in community-theater fundraiser.

It was greasy. It was casual. It was heart-warming. It was a little sappy.

September 20, 2014
In Memory of My Friend, My Boss, My Mentor: Jennifer Gilnett
Next Post

September 22, 2014 This Post Contains R-Rated Subject Matter: Viewer Discretion is Advised.
Recent Comments
3 Comments | Leave a Comment
Browse Our Archives
get the latest from
Entertainment
Sign up for our newsletter
POPULAR AT PATHEOS Entertainment
1

3 responses to “Is Chef the Greatest Movie Ever Made About Sandwich-Making?”