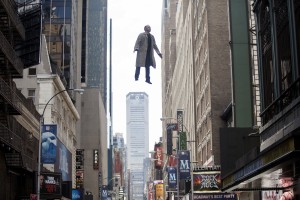 I’ve read that Birdman is a movie that pulls back the curtain to reveal (surprise!) that show-biz is really just a hell of egomaniacs on adrenalin highs, using and abusing one another for stardom, and taking the name of “art” in vain. The rumors are true… it does.

In case you’ve missed the rush of reviews so far: Birdman stars Michael Keaton (this performance almost requires me to type his name in ALL CAPS) as Riggan Thomson, a very Michael Keaton-like star who once blockbusted the box office as a gruff superhero (one who seems more Iron Man-ish than Batman-ish), but who now despises the banality of the whole comic-book movie genre. In reaction against his cultural entanglement with sophomoric cinema, he’s trying to reinvent himself on Broadway to gain a reputation of relevance and dignity by writing, directing, and starring in a Raymond Carver adaptation, in the company of a legendary stage actor and up-and-coming talents (played by a supremely confident Edward Norton; a sensually spectacular Andrea Riseborough; and Naomi Watts, nervy and neurotic).

But Riggan has bigger challenges than his slow disappearance from movie theater marquees:

His crisis of ego, identity, and confidence is just the latest manifestation of one of Hollywood’s favorite characters: the artist who puts his soul at risk for the sake of success. If it weren’t for the coaching of his devoted stage manager (Zack Galifianakis, surprisingly strong as Riggan’s manager and voice of reason), he might just fall to pieces. 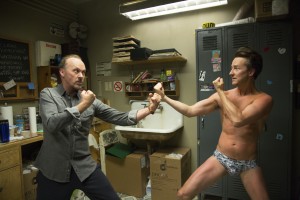 In spite of a wave of rave reviews for Birdman, I bought a ticket with some reluctance. Director Alejandro Innaritu’s films have been consistently off-putting for me: overbearingly grim (Remember 21 Grams? Yuk!), self-servingly ambitious, with storylines and coincidences that feel rigged for extreme pathos. Babel remains the one that succeeds (somewhat) in making me care about characters and stories instead of thinking mostly about the director and showy techniques.

Also, this theme — the curse of fame, the cost of worldly success — feels too easy, too done to death. There are so many stories that illustrate it, and they are usually populated by flamboyantly and annoyingly self-absorbed characters. You could run a long film festival on mediocre movies about artists and ego.

I worried that Birdman would have a hard time standing on its own, instead of just reminding me of other, better films. And I did think about other films a lot:

Above all, Birdman‘s focus on an egotistical artist’s self-loathing reminds me most of Charlie Kaufman’s Adaptation and Synecdoche, New York: There’s a hint of Ecclesiastes here, as it’s downright unpleasant to watch gifted human beings cry “Vanity! All is vanity!” as they descend into the ugly abyss of self-importance, self-obsession, and self-loathing. 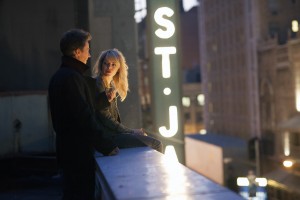 And yet, I was never bored. The two hours flew by — in spite of Innaritu’s distracting and puzzling need to make it all look like one uninterrupted shot when everybody knows that it isn’t one.

I was enthralled because of the cast. Good old-fashioned acting is what made the film so watchable for me: Keaton, Norton, Stone, and Galifianakis (in that order) are all fantastic, giving what many will call career-best performances. I’m increasingly resistant to the idea than anyone has the credibility to call anything the “best” anything in art, but everyone here is very impressive indeed.

It doesn’t hurt that the soundtrack’s constant zigzag between percussive jazz and emotional swells of strings is a brilliant approximation of the tensions, agitations, and hauntings that career performers tend to suffer.

But oh, the missed opportunities for comedy. There are rich possibilities here that are almost squandered. The best example of this is the scene in which an actor gets locked out of a theater, his robe caught in the door, and must decide whether to hide in shame or shed his cover and run almost naked through Times Square. It should be hilarious, but Innaritu and cinematographer Emmanuel Lubezki are so focused on technical showmanship that the scene is all about execution instead of absurdity.

Still, to honor what works, let me take the subject as seriously as I can: As I watched it, I found myself taking a step back and seeing all of this Broadway anxiety as representative of America as a whole. 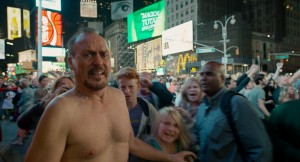 Mr. America, looking around at the mythic superhero that he made himself out to be in the world, now sees how facile and childish that crowd-pleasing and self-deluding character really was. He’s learned where that persona gets him in the world: He isn’t the world’s superhero, and he knows it — but isn’t it tempting to fall back into that lie for how good it once made him feel? Isn’t that what the current obsession with superheroes is about: The self-serving fantasy that America’s true identity is Iron Man or Captain America, and that through the powers of our own ingenuity and determination and imagination America can save the world? People line up for that shit.

So Mr. America has a choice: To resurrect that heroic persona, as hollow and fraudulent as it makes him feel, or to put on some new costume that claims respectability and integrity.

Since the goal in either option is to be a star — to obtain validation from an audience (whether that be the public or the press) — the best option is, of course, “None of the above.” But Mr. America is unable to imagine pursuing a life that won’t feed his appetite for attention and glory. Thus, he’s bound to fail spectacularly at any persona… unless he measures his success by the latest and most pathetic definition of success that America has invented so far: He must become a Trending Topic.

Thus, the film is a vivid picture of “the Problems” of ego, fame, and authenticity in a world that prefers the familiar and the flattering to truth and beauty and creativity. But does it have any wisdom? Does it shed any real light?

I think (and this is just a first impression) that the film writes itself into a corner. The ending feels awkward and confused. I think I’m supposed to find some kind of uplift and inspiration, but instead I found it rather baffling. Maybe I’ll understand it at a later date. Whatever was supposed to work there didn’t work for me.

Surrounded by temptations, robbed of privacy, broke, and lacking the integrity to participate in meaningful relationships, how’s a guy — or a country — to recover from the curse of temporary “success”? What are we supposed to do if nobody’s willing to give us that feeling of being “special” in the world?

That little voice of conscience, even cultural conscience: it’s trying to tell us something about all of this idolatry and egomania. The cure — we won’t find it in achievement, in heroics, or in anything that earns headlines or attention or applause. It won’t come from “delivering something meaningful.” Perhaps it will come to those who can learn to cease striving, who can surrender the pursuit of importance, who can give up an appetite for even fifteen minutes of fame. 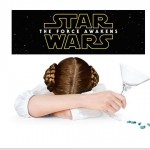