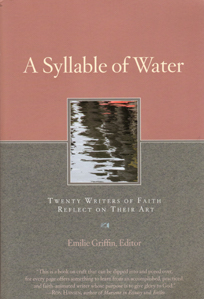 In the early days, they plotted how to kill each other.

That may sound like unseemly behavior for a group of celebrated Christian writers. But you can read all about the murderous conspiracies of The Chrysostom Society in their first collaborative literary effort: Carnage at Christhaven. It’s a serial murder mystery — satirical, smart, and subversive — each grisly chapter contributed by a different society member. (It was first published in 1989.)

None of them, not even the writers themselves, were safe within those pages. (Even inspirational Christian writer and Society member Philip Yancey turns up dead.)

Whatever one thinks of this book, this enterprising fellowship of writers can’t be accused of taking themselves too seriously.

Read all about their strange history here, at the Society’s worldwide web headquarters.

I’d recommend any of their collaborative books, which you can browse here.

My current favorite is A Syllable of Water, in which Robert Siegel, John Leax, Scott Cairns, Luci Shaw, Erin McGraw, Virginia Stem Owens, Emilie Griffin, Jeanne Murray Walker, Philip Yancey, and more share advice for writers of all different genres. This is the first book I require students to order when I teach creative writing.

I’ve been enjoying the Chrysostom Society’s writing since high school, when my father gave me a treasure of a book called Reality and the Vision. (It’s been republished under another title: More Than Words.)  In it, authors like Madeleine L’Engle, Stephen Lawhead, Luci Shaw, Philip Yancey, and Walter Wangerin Jr. write about their favorite writers. 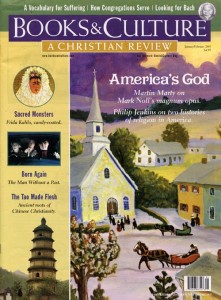 I never dreamed that I would someday, through a spectacular clerical error, find myself a member of the Society! This group has become the community that encourages me most in my own writing. I’ve just returned from a Chrysostom gathering in Texas, where I read a rough draft of a personal essay and received excellent counsel in how to revise it.

As a gesture of my gratitude to them for welcoming me into their strange rituals and secretive endeavors, and as an expression of my enthusiasm for their work, I’m going to introduce you to some of the Society members one by one.

Let’s begin with the Society’s most notorious hoarder of books: John Wilson, the editor of Books and Culture.

John Wilson’s work on Books and Culture has led me to books that I treasure, poets I faithfully follow, and enlightening perspectives on movies as well. (I’ve even had the privilege of being published in its pages.)

As Wilson himself has said, the journal is not just about books. It’s about everything.

Books and Culture convinced me at a very young age that Christians could write criticism that was as intellectually adventurous and insightful as any criticism. I encourage you to subscribe for one year, and you’ll see what I mean.

But this isn’t just about the publication — it’s about the man. John Wilson is a close reader — of books, of art, and of people. He was a big believer in my novel Auralia’s Colors, and supported me with encouragement throughout that four-book project. (He’s also a close reader of Twitter, but watch out: His scalpel-like intellect does not suffer fools gladly.)

On night after I had lectured at the Laity Lodge Writers’ Retreat, Wilson and another Chrysostom member talked with me late into the night, persuading me to consider my own future as a writer in a whole new way. That led to my decision, after years of uncertainty, to pursue a masters in creative writing. It was the right choice. And without his recommendation, I might not have started up that path at all.

John Wilson is also an editor at large for Christianity Today magazine. He received a B.A. from Westmont College in Santa Barbara, California, and an M.A. from California State University, Los Angeles. You can find some of his reviews and essays in The New York Times, The Boston Globe, First Things, National Review, and beyond. He and his wife, Wendy — also a born encourager of writers and artists — live in Wheaton, Illinois.

Here’s a great interview with Wilson about his work.

And here is his list of his favorite books of 2014.

When John Wilson speaks, my library gets larger. And my life gets richer. 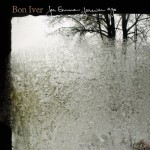 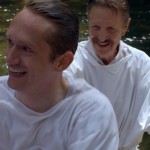 February 6, 2015 Now Streaming: One of 2014's Most Meaningful Thrillers
Browse Our Archives
Follow Us!

Job for Children?
Review of "Where is Wisdom?" by Scott James
view all Entertainment blogs
Copyright 2008-2020, Patheos. All rights reserved.