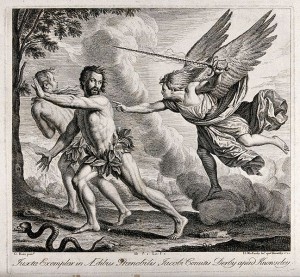 I heard this somewhere. It stuck. I think about it often, especially at Easter. I think it’s true.

When you and I, who were designed to be gardeners, were banished from the garden for trying to make ourselves like God…

(And by the way, weren’t we already made in His image and given everything we could hope for? What more did we want? What did we think a piece of fruit would give us that we didn’t already enjoy? I don’t know. I just know that I strive for what I do not need in hopes of gaining power I cannot handle all the time.)

… an angel stood blocking our re-entry. We got what we’d asked for: Now we had the knowledge of good *and* evil.

Then, after we had worn ourselves out trying uselessly to earn our way back into the garden…

(It’s a frequent and maddening delusion of religion, and even of the Church, that we can earn God’s favor. And yet, how often do I find myself hoping God notices when I’m “generous” or “prayerful” or “sacrificial”?)

…Christ came to announce God’s forgiveness and grace, thus making all things new. Then he showed us how to overcome our fear of death and be saved from the seemingly endless cycle of sin and consequences: He opened his arms, received all of the condemnation and hatred that the world had to offer, and he refused to retaliate with violence. He suffered. He suffered all the way to death, so that even if we suffer we can know “He’s been there, and guess what happens next?” He showed that answering violence with violence was unnecessary, because — as he was about to powerfully reveal — violence does not actually destroy us, or end us, or cut us off from life. Violence only casts us, along with Christ, into God’s hands, those hands that have power over death.

In fact, the Scriptures assure us that he set in motion what will eventually conclude with the End of Death Itself. Embracing death, absorbing it, overcoming it, and rising from the grave — to borrow some words from the prophet Obi-Wan Kenobi — “more powerful than we can possibly imagine,” he gave us a preview of the eventual revelation: All death with die. Death and Hades, in the Revelation of John, are erased so that they exist nowhere, for no one.

That favorite command of the angels: It’s the Easter theme song.

Thus, when Mary ran into the garden, grief-stricken, believing that Jesus was overthrown and that she was stranded in a hopeless hell beyond Eden, she came to the grave and found angels. 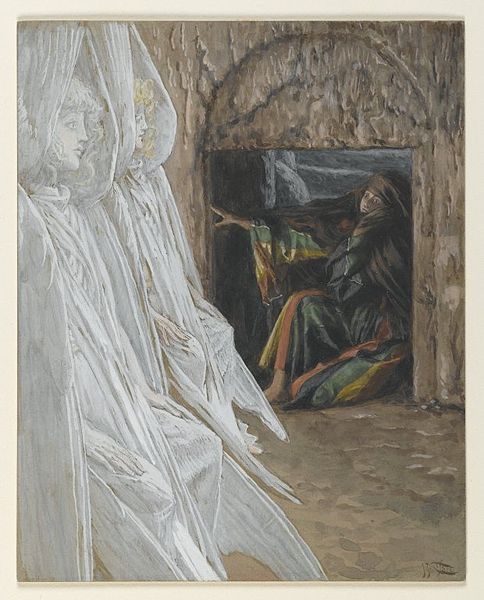 But the angels were not standing in the garden with swords, readying to confirm her fears. Rather, they were seated, friendly, approachable, and even at rest. She did not see the significance of this: Their garden vigil is over. They’ve been relieved of their duty.

And look, that fellow who seems to be the gardener… he is the gardener. The first true gardener since the banishment from the garden. He’s a new Adam, a human being in the image of God, enjoying the freedom of being what we were all meant to be: fearless gardeners in God’s garden.

He welcomed her. “Mary,” he said, and I always marvel at the tenderness, the consolation, in that. On the other side of the valley of the shadow of death, when we have returned to the garden, we will recognize one another.

We don’t have to wait. We can return now, before we’re called to pass through that shadow. The garden — the kingdom of God — is open for business again, accessible whenever I surrender to Christ who lives within me, or acknowledge Christ within someone different than me. (The kingdom isn’t found exclusively in the Bible or in church — Jesus and the prophets taught us to look around for revelations of the kingdom in nature, in beauty, and in the most unexpected places. The illusion of hierarchy is eliminated when we find that that the kingdom of God is waiting in the barn when there are no vacancies at the inn. The kingdom is to be found among the poor; in the bar with the social outcasts; on the road, where Jesus walks unrecognized, his pockets empty of cash, and nobody offering him a place to sleep.)

I’m back in the garden when I manage to see past my unnecessary fears and my delusions and find him; when I remember that I am not living in the kingdom of death. Death is not an abyss — it’s a shadowy passage, one that Jesus knows by heart. When I see him on the cross, I see him in the shadow, open-armed, surrendering to death, yes, but more importantly, to the power that surrounds, inhabits, and transcends death. He will carry us through the shadow to a place where we will laugh and realize that the trials of “the knowledge of good and evil” are nothing compared to the glory, the freedom, the relief set before us.

We can find our way back into the garden anywhere and start gardening fearlessly. Anytime.

When the garden, the kingdom, the state of union with Christ seems hard to find, it’s probably because I’m treating someone or something else as a god — my financial security, my favor with others, my vocation, my family, my political preferences, or myself, perhaps. When it seems hard to find, I look for the signposts. They’re set up anywhere we find beauty — in nature, in art, in the flickers of God’s image within one another. Beauty attracts us because it reminds us of what we were meant for, who we came from, and to whom we’re bound to return.

The best way to find our way back to the garden is by training ourselves to find the gardener. He dwells within me, so I need to forgive myself for my failures and surrender again to his influence over me. He dwells within children, within my neighbors, within the poor, and even within my enemies who would like nothing better than to harm me.

To live in the garden, I need to learn to live fearlessly; to respond to my enemies with open arms — as a rejection of their claim that the death they wield is a sovereign power.

That’s the example Christ set. When Christ empowers me to that kind of fearlessness, my blindness falls away. I see the garden everywhere.

Anyway, that’s the story I’ve heard. It’s my story. And, clumsy and forgetful as I am in believing it, I’m sticking to it.

He is risen. Hallelujah. 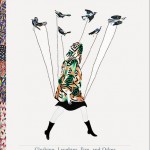 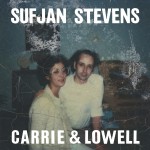 April 6, 2015 In Preparation for Mother's Day: U2, Over the Rhine, Sufjan Stevens, St. Vincent, and More
Browse Our Archives
get the latest from
Entertainment
Sign up for our newsletter
POPULAR AT PATHEOS Entertainment
1

Movies and series about Ultra Orthodox Jews beginning...
With the huge success of Netflix's three season series "Shtisel" there is...
view all Entertainment blogs
Copyright 2008-2021, Patheos. All rights reserved.
error: Content is protected !!