Looking Closer Intern Joe Allen here, counting down the days until I get to see Mad Max: Fury Road, which has all of the buzz and momentum of a summer action-movie classic.

Overstreet is off to Vancouver B.C. to check out the opening weekend of U2’s Innocence + Experience tour, so we can assume we’ll get a report about that at some point. In the meantime, here’s what he wanted me to share with you — a few highlights from his lunch-break browsing…

NPR First Listen is featuring a short-term stream of Monterey, the new album from The Milk Carton Kids. (I really hoped they’d called the record “Have You Seen…?” I mean, considering their band name, it just makes sense.) 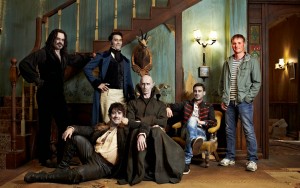 Anne and I enjoyed our first date-night movie in over a month last night, and we chose wisely: What We Do in the Shadows.

Imagine Christopher Guest and Jim Jarmusch collaborating on a mockumentary about contemporary vampires, and you’ve got a good idea of what you’re in for.

Here’s the link to his first-impression notes at Lettberboxd. And if you’re interested, good news: The movie is available for rent on various video-on-demand services already. If you’re in Seattle, go see it for $4 at the Crest while it’s still there.

I’m more inclined than Overstreet to celebrate ABC’s announcement that The Muppets are returning with a new weekly TV series. Henson is one of his heroes, but he’s feeling anxious because ABC says this series is going to be “more adult.” Wasn’t the original Muppet Show for adults? How much more “adult” does it really need to be? What exactly do they mean by “more adult”?

But personally, I think this trailer looks fantastic.

We’ve come the end of Jackson’s Middle-earth, which hopefully means we’ll soon be done hearing Overstreet complain about how awful those movies were. Are there any promising fantasy films on the horizon? Here’s one: The Tale of Tales, from Italian filmmaker Matteo Garrone. Check this out:

Monty Python by way of Tim Burton and “The Princess Bride,” Italian director Matteo Garrone’s first English language feature “Tale of Tales” is a nutty compendium of outrageous fairy tales unfolding within the constraints of a single unseemly kingdom.

Garrone’s bizarre narrative incorporates four overlapping stories in a kingdom filled with the usual ensemble of mythological beasts, magical powers and royal schemes. While every sequence goes to certain outrageous extremes — plot twists include the consumption of a giant sea monster’s heart and the nurturing of a dog-sized flea — Garrone cuts between them with a fluid approach that successfully conveys the perception of a self-defined world. Eschewing narration or title cards, the filmmaker plunges into a series of mysterious events while developing the sense that they all feed into one big, twisted universe.

With some of the best practical effects this side of “Pan’s Labyrinth,” as well as castle scenery and surrounding forestry that may as well stem from remnants of the “Into the Woods” set, Garrone’s movie is blatantly derivative while refashioning its material into his own satisfying playground. Despite the discombobulated structure, the filmmaker manages to create a fully involving world. He’s aided to that end by both veteran cinematographer Peter Suschitzky (“The Empire Strikes Back,” “Mars Attacks”), whose complex color scheme fleshes out the storybook feel, as well as yet another awe-inspiring Alexandre Desplat score. The craftsmanship sustains the story through a series of kooky twists, none more surprising than a finale that expertly pulls all the pieces together at once. 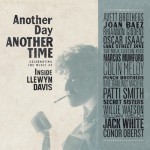 May 22, 2015 How to Hear the New 2015 Looking Closer "Playlist in Progress"
Browse Our Archives
get the latest from
Entertainment
Sign up for our newsletter
POPULAR AT PATHEOS Entertainment
1

A Face in the Crowd and The Psychology...
I actually didn't start watching The Andy Griffith Show until really recently....
view all Entertainment blogs
Copyright 2008-2021, Patheos. All rights reserved.