Could this be the Most Anti-life Deed? 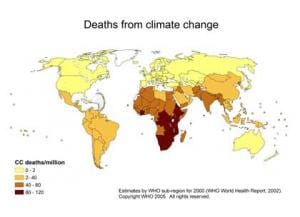 On June 1, 2017, Donald Trump announced that he would pull the United States out of the Paris Climate Agreement at the earliest possible date. The earliest possible date to begin the process was November 4, 2019. On that date, through Secretary of State Pompeo, Trump announced the formal beginning of the process. In fulfillment of a campaign promise, Trump threatens to commit the world’s most anti-life deed. If completed it will result in more lives lost than any other single deed that I can think of.

Backing out of the Paris Climate Agreement is an attack on the young and the unborn. They are the ones who will suffer most in the decades to come as the earth continues to warm with catastrophic consequences. Storms and droughts will grow more intense. Coastal cities will flood more often. Glaciers, crucial sources of water for a billion of the world’s people, will disappear. We are already seeing climate refugees. Their number will far exceed the number of today’s refugees from wars.

A National Catholic Reporter article lists several Catholic organizations condemning Trump’s move. They include the Leadership Conference of Women Religious, Catholic Relief Services, the Maryknoll Office for Global Concerns, the Columban Center for Advocacy and Outreach, the Sisters of Mercy of the Americas, the Franciscan Action Network. “This will have disastrous consequences for life on our planet as we know it,” the Franciscan Network’s executive director said of this “selfish, partisan maneuver.”

Popes Saint John Paul II, Benedict XVI, and Francis have spoken clearly and in unity about the moral and hazard of climate change and its destructive effects, especially on the poor. And they are the ones least responsible.

On the opposite end of the responsibility spectrum stands the United States. Some people that I have talked to hide behind China, the new leader in greenhouse gas emissions. We’re not as bad as China. Let them clean up first. Well, in what counts most we are as bad as china, or worse. Our per capita emissions are still much worse than China’s. Besides that, China’s carbon footprint is unfairly enlarged by all the products that we buy from China. We’re outsourcing part of what should count as our greenhouse gas emissions.

The lungs of the planet

The Synod on the Amazon spoke clearly about the ways developed countries’ are harming the Amazon rainforest. First, they cause global warming, which negatively impacts many forest species. Our habits of consumption demand meat from clear-cut forest land and metals and other minerals mined, despite environmental harm, from the Amazon.

The Synod repeats the common metaphor “lungs of the planet” to describe the rainforest. It’s an odd way of describing the benefit that the Amazon supposedly gives to the world. All the lungs I know of breathe in good air and breathe out bad air. The metaphor is ironically appropriate, though. As the amazon burns,  it “breathes out” the carbon that over centuries it breathed in. Only a growing Amazon breathes out an excess of oxygen.

Recently 11,000 scientists from around the world declared “clearly and unequivocally that planet Earth is facing a climate emergency.” Forty years since the First World Climate conference, greenhouse gas emissions are still rising. Earth is heating faster than anticipated with damaging results more severe than previously thought.“The climate crisis has arrived and is accelerating faster than most scientists expected.” Efforts to cut greenhouse gas emissions and conserve the biosphere must increase dramatically “to avoid untold suffering due to the climate crisis.”

The scientists link the crisis closely to a wealthy lifestyle of excessive consumption.” Consumption of energy from all sources has risen dramatically. Percentage-wise solar and wind rose the most; but, starting near zero, that doesn’t amount to nearly enough. Specific contributors to rising energy use include:

Meanwhile, fossil fuel subsidies, which started going down a few years ago, have been rising the last two years.

The scientists report on visible and measurable changes in the natural environment:

All of these foreseeable developments will be worse with Trump’s backing away from the task of reimagining and correcting our wasteful, polluting, life-destroying use of the world’s resources.

The world is a big place, and for most people their local area is much more real. My local area is Minnesota, so I went to a talk on global warming by Minnesota Public Radio meteorologist Paul Huttner. There I got much of the local story. I’ve added details from the Minnesota Pollution Control Agency website:

Scientists from the World Health Organization and the University of Wisconsin-Madison researched the number of deaths and illness that due to global warming. Each year global warming causes 150,000 additional deaths and 5 million human illnesses around the world. They fear that number “may well double by 2030 even if we start getting serious about emissions reductions today.”

These death and illness figures don’t take into account plain old pollution from burning fossil fuels. Putting a number on deaths from pollution is harder than, say, from car accidents. Air pollution basically speeds up mortality, especially for certain groups of people.

The London Guardian describes how the scientists translated that into more comprehensible death figures. Air pollution kills seven million people who wouldn’t have died that year. Or,

there are 120 extra deaths per every 100,000 people per year. Put that way, it might not sound too bad. But we don’t regard, say, the three people murdered in Europe per 100,000 per year as remotely acceptable.

Of course, we all die eventually. These millions of deaths represent an average loss of two years of life for everyone on the planet. That also is part of the global warming story. Lives will be saved and quality of life will be improved if we move from our current reliance on fossil fuels to an economy based on carbon-free energy sources.

Being pro-life means much more than opposing abortion. For the United States it means staying with worldwide efforts, including the Paris Climate Agreement, to reduce global warming emissions. It could mean following New Zealand’s example. Recently they joined other countries, cities and states, in pledging to cut emissions to zero by 2050. It means regaining the moral status our country had when the Obama administration contributed to the working out of the Paris accord. It means following through on the commitment rich countries made to help poor countries both adapt to climate change and move their economies in a sustainable direction as they improve their people’s lives.

November 4, 2019
Liturgical Reform and This Series amid Contrary Views
Next Post

November 13, 2019 The Creed, a Story Not an Essay
Recent Comments
2 Comments | Leave a Comment
"I think its awesome and yes, a great step forward on the many steps our ..."
Eric Cooper Muslim Call to Prayer will sound ..."
"I wish, but I don't know."
fritzpatrick Ministries in the Church, Momentum for ..."
"Thanks for the kind comments. I'm glad to have your presence in the Church that ..."
fritzpatrick God’s Army: Jesus Appraises Two Volunteers ..."
"Could that PRIEST, consecrating the Eucharist at Mass, ever be a woman? Yes!"
Luis Gutierrez Ministries in the Church, Momentum for ..."
Browse Our Archives
Related posts from Lost in a One-Acre Wood

Catholic
Ecological Sin -- It Makes Sense … and...
Lost in a One-Acre Wood