This post traces the development of Catholic Church teaching on the morality of nuclear weapons. In particular, it looks at the nuclear powers’ strategy of deterrence. Following that strategy Russia and the U.S. keep their nuclear weapons at the ready to deter each other from using them first. For a while conditionally accepting deterrence, the Church now officially condemns even the possession of nuclear weapons.

The immorality of nuclear weapons use

A philosophy prof at Catholic University in the 1960’s told his class that the only moral use of a nuclear weapon would be against a warship at sea. In other words, the vast majority of the world’s nuclear bombs have no moral use. That is the position of the Catholic Church today. Admiral William Leahy, already in 1945, expressed today’s Catholic position precisely: The bombings of Japanese cities were violations, he told President Truman,

… of every Christian ethic I have ever heard of and all of the known laws of war.… I was not taught to make war in that fashion and wars cannot be won by destroying women and children. (University of Baltimore Magazine, “10 Things You May Not Know About U.S. History”)

Innocent civilians almost inevitably become casualties in war. It’s called collateral damage. An attack meant to kill enemy soldiers may, often does, stray off target unintentionally. Military intelligence is not perfect, particularly regarding the whereabouts of civilians. A military target may be important enough to justify an attack even when some civilians happen to be present. But an attack that destroys a city is not like any of those cases. You can’t deliberately annihilate a city full of innocent civilians and only intend to destroy soldiers and military capabilities. Whether you admit it or not, you intended to kill everyone within the area you aimed at. It wasn’t accidental. That makes the action immoral.

The moral hazard of deterrence

For decades the Church has wrestled with the moral status of possessing weapons that cannot be used morally. The major nuclear powers, including the U.S. and Russia, have stockpiled enough nuclear weapons to destroy civilization as we know it. The belief is that the certainty of “mutual assured destruction” will deter both sides from starting a nuclear war. This strategy of deterrence is a moral conundrum. For deterrence to work, you must intend to do a heinously immoral act, if your enemy does. Essentially, the country tells service people in the missile silos, submarines, and bombers that they must follow orders, not their conscience. I don’t know how a Catholic, or any moral person, could sign up for those jobs.

To deal with this unsatisfactory arrangement, the Catholic Church made a prudential decision. It would not condemn the strategy of deterrence (and the possession of nuclear bombs) as long as there was good faith movement toward eliminating these weapons. A U.S. Catholic article outlines the history of this conditional acceptance of deterrence:

The ups and downs of nuclear disarmament

In the next 10 years the world changed. The Soviet Union dissolved into its member states. It seemed the “Cold War” was at an end.

Up to that time progress on controlling nuclear weapons consisted mostly in keeping a bad situation from getting worse. Nuclear weapons states had signed a variety of treaties starting in 1959. Some treaties aimed to keep certain areas of the world, like Antarctica and the seabed, free of nuclear weapons. Other treaties limited the extent to which a country’s nuclear arsenal could grow. Others aimed at preventing more countries from going nuclear.

More ambitious treaties were coming, and stockpiles of nuclear weapons would begin to go down. The U.S. Catholic article notes that “with new partners in Russia, U.S. negotiators made rapid progress on nuclear disarmament.” But, the article laments,

… as the 20th century drew to a close, Vatican diplomats became frustrated by the diminishing pace of disarmament.

A world without nuclear weapons wasn’t a goal the nuclear powers were chasing very seriously.

But the year 2010 saw another highlight in nuclear disarmament. With New START (New Strategic Arms Reduction Treaty), the U.S. and Russia built on previous START treaties. The two countries “met the central limits of the treaty by February 5, 2018, and have stayed at or below them ever since, The U.S. Department of State says. The treaty cut in half the number of nuclear missile delivery systems and cut by two-thirds the number of deployed warheads from the original 1991 START treaty.

Then came the presidency of Donald Trump and backtracking on a number of nuclear arms treaties. New START was in still force, but only until just days after the next presidential inauguration. The new President Joe Biden promptly renewed the treaty, with Russian cooperation, for five years.

It looks like, by the skin of our teeth, we are still on track for limiting nuclear arms and avoiding a new nuclear arms race. Not necessarily. New START limits the numbers of nuclear weapons, not their quality. Both Russia and the United States are contemplating huge expenditures in the effort to outdo each other in the quality of nuclear weapons and delivery systems.

One new weapons mutation is the development of smaller, lower-yield nuclear weapons. These, presumably, could be used on the battlefield and turn a warring country’s losing effort into victory. Or, just as likely, escalate into all-out nuclear war. The war in Ukraine has seen Russian President Putin engage in just such nuclear saber rattling.

New delivery systems include rockets that fly like planes but at hypersonic speeds. They can maneuver at low altitudes, evading radar detection.

In recent years the U.S. Department of Defense has proposed replacing and upgrading its entire fleet of land-based nuclear missiles. The Biden administration has not yet weighed in on these plans.

The new millennium saw the Church’s increasing dissatisfaction with the nations’ reliance on deterrence and the halting pace of disarmament. The U.S. Catholic article enumerates:

The conditions that prevailed during the Cold War, which gave a basis for the church’s limited toleration of nuclear deterrence, no longer apply in a consistent and effective manner.

The Vatican was a leading advocate for and one of the first to sign the Treaty on the Prohibition of Nuclear Weapons.  In 2017, one hundred twenty-two nations signed the treaty, but not any of the nuclear powers.

Two months after the signing of the treaty, Pope Francis made a decisive break with the conditional acceptance of deterrence. He condemned not only the threat of using nuclear weapons but also “their very possession.” Commenting for America Magazine, Bishop Robert McElroy of San Diego said:

Pope Francis was clear that because of the significant risks of even an anticipated or accidental war, and of the gargantuan and devastating effects of nuclear war, and of provoking other nations to perhaps use them, the possession itself of these weapons is now condemned, regardless of the intention.

In a major statement in 2018 the United States Catholic bishops noted the Church’s longtime support for treaties and initiatives to reduce and even ban nuclear weapons. They enumerated several objectives for national nuclear policy. Among other recommendations, they said the U.S. must:

The risk that nuclear bombs in missile silos scattered mostly in Western lands pose is one of the concerns of the Union of Concerned Scientists. The final post in this series will take up their recent proposal to eliminate that risk. They suggest taking down the land-based portion of our deterrence strategy. It would leave intact the rest of our nuclear “triad” – bombers and nuclear missile-equipped submarines. Deterrence would still be the name of the game, but in a safer form. Taken unilaterally, it might even challenge Russia to make its own daring move.

August 13, 2022
Trying to Justify the Bomb – Stories and Facts
Next Post

August 28, 2022 Does a Land-based ICBM Force Keep Us Safe from Nuclear Armageddon
Recent Comments
0 | Leave a Comment
"I suspect the Bishop's objections to human composting are more related to who is doing ..."
3vil5triker . Human Composting: California Bishops Say ‘No,’ ..."
"We in 2022 can always look back and determine how we could have made better ..."
Tom O. Trying to Justify the Bomb – ..."
"The one question I have is how we should have handled an aggressive force like ..."
Tom O. Nuclear Deterrence: The Church’s Changing Moral ..."
"Because excited ~ I feel great!👉👉----->>>HTTP://TELFS-3D.NET/o27258e"
DragolichOfOblivion Trying to Justify the Bomb – ..."
Browse Our Archives
Related posts from Lost in a One-Acre Wood 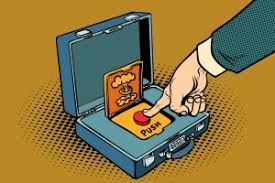 Catholic
Does a Land-based ICBM Force Keep Us Safe...
Lost in a One-Acre Wood

Catholic
Trying to Justify the Bomb – Stories and...
Lost in a One-Acre Wood

Catholic
Hiroshima, Nagasaki and the Conscience of World War...
Lost in a One-Acre Wood

Catholic
Laborers in the Vineyard: A Reading that Doesn’t...
Lost in a One-Acre Wood
TRENDING AT PATHEOS Catholic