The Sweetest Easter Vigil Ever 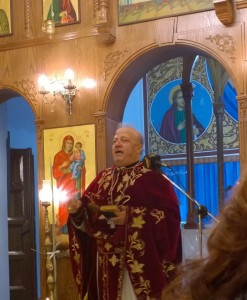 Finally, I am here in Jordan. By the mercy of God, my second attempt to get here was not a failure (even though another set of storms rolled in just before it was time to leave for the airport). The flight was quite enjoyable. Kudos to Royal Jordanian Airlines for their professionalism and hospitality.

By the time I reached my hotel, there was only a brief respite before gathering with the rest of the group to have dinner in the hotel’s main restaurant. There was a fantastic array of food, and I’m sad to say I hadn’t much appetite at that point, so I sampled very little of it. Nonetheless, it was wonderful to finally be united with my group – some of who I already know, and some of who I met for the first time.

The greatest gift for me was to have made it in time to attend the Easter Vigil at the (Melkite) Cathedral of Sts. Peter and Paul in Amman, celebrated by Fr. Nabil Haddad, founder of the Jordanian International Research Center. The vigil was held in the Byzantine Rite, something I’d never seen before. I’d been in Byzantine churches when I traveled to Israel last May, but I had never seen one in action, so to speak.

The rite itself was amazing to witness. Even though it was all in Arabic, I could, for the most part, figure out what was going on. I’m sure there was much I’d missed, which gives me a yearning to learn more about the other rites of this amazing Catholic Church of ours.

One part of the liturgy stood out for me, because it added a sweetness to the Easter Vigil that’s hard to describe. In the Roman Rite, the priest blesses the congregation with palms or an aspergillum. Last night, Fr. Haddad used a bouquet of a dozen roses dipped in a bowl of holy water. Until that moment, I had no idea how much water a bunch of roses can hold. We really got a soaking! What’s more, the holy water had the faint smell of roses as we were blessed with it.

After the blessing, the Fr. Haddad processed around the church sprinkling rose petals everywhere. As they fell, I noticed that some of the women quickly gathered up the fallen petals and pressed them int their prayer books. I really wanted to do the same myself, but held back. I was a guest in this parish, and somehow it didn’t seem right to take something that I felt belonged to the parishioners. In hindsight, I’m kicking myself for not grabbing at least a petal or two.

He is the Christ who died for our sins, was buried, and rose again. On the third day, his Body was renewed and transfigured. As I observed the Easter Vigil last night, I easily imagined the sweetness that must have exuded from the tomb as the stone was rolled away and our Lord emerged in his glory. More than anything at that moment, I wanted, not to be standing in St. George Cathedral in Amman, but at the tomb on Easter morning. I wanted to see the magnificence of the Resurrection and smell its sweetness.

But, at the same time, it was an incredible gift to be in St. George Cathedral, taking in the sweetness of the Vigil, the awesome newness of the Byzantine Rite, and sharing in the joy of the Resurrection in this small parish of kind and welcoming Jordanians.

For me, it was the sweetest Easter Vigil ever. 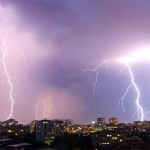 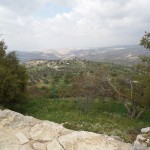 April 13, 2015 What makes a prophet a prophet?
Recent Comments
0 | Leave a Comment
Browse Our Archives
get the latest from
Catholic
Sign up for our newsletter
POPULAR AT PATHEOS Catholic
1