About Those Five Non-Negotiables, Donald Trump, Jimmy Carter, and Colossians 2:8

As I have mentioned in this space in the past, I think the five non-negotiables thing was well-intentioned. For them what don’t know, it was an attempt to prioritize abortion, euthanasia, Embryonic stem cell research, gay “marriage”, and human cloning and remind Catholic voters that these are things the Church cannot change its teaching on. Reasonable enough, but by no means Holy Writ and not without its problems, which a decades worth of politics has now thoroughly exposed.

The principal problem with the Five Non-Negotiables is that the morphed over time from Top Priorities to The Only Thing That Matters and then went on to become Shields for Justifying the Real Non-Negotiables of the GOP. Mention any of the GOP actual beloved priorities such as unjust war, torture, our 32 thousand annual human sacrifices to the NRA, or punishing the poor or criticize some beloved GOP folk hero (like Cliven “Let me tell you about the Negro, who would be better of picking cotton” Bundy) and the instant response is always “Why are we focusing on this? What about abortion?” The unborn have gone from being our top priority to being human shields for people like Mitt Romney, who obviously did not care about them one iota.

Case in point, the current leader in GOP polling: Donald Trump. Have you noticed his eloquent and passionate defense of the Five Non-Negotiables since he threw his hat in the ring?

Me neither. Rather he has surged in the polls for one reason and one reason only: he is a naked and unashamed racist (and a hypocrite who employs undocumented workers while using them as whipping boys). That’s why he’s ahead in the polls. No other reason.  Standard boiler plate reply: “People like Trump because he has the guts to tell the truth and not care how the left twist his words”.  Yeah.  Except that’s not true:

And for those obsessed with the Genetic Fallacy and unable to accept reality from Evil Liberal Jon Stewart, there is also Linda Chavez, attempting to talk conservatives out of their latest act of mass suicide. But of course, that’s not enough to get the defenders of The Donald to back off (just read the comboxes). And conservative Catholics are right in there with them. Because it’s all about the five non-negotiables.

In addition, he again distinguished himself in the field of political rhetoric by retweeting this substantive argument: 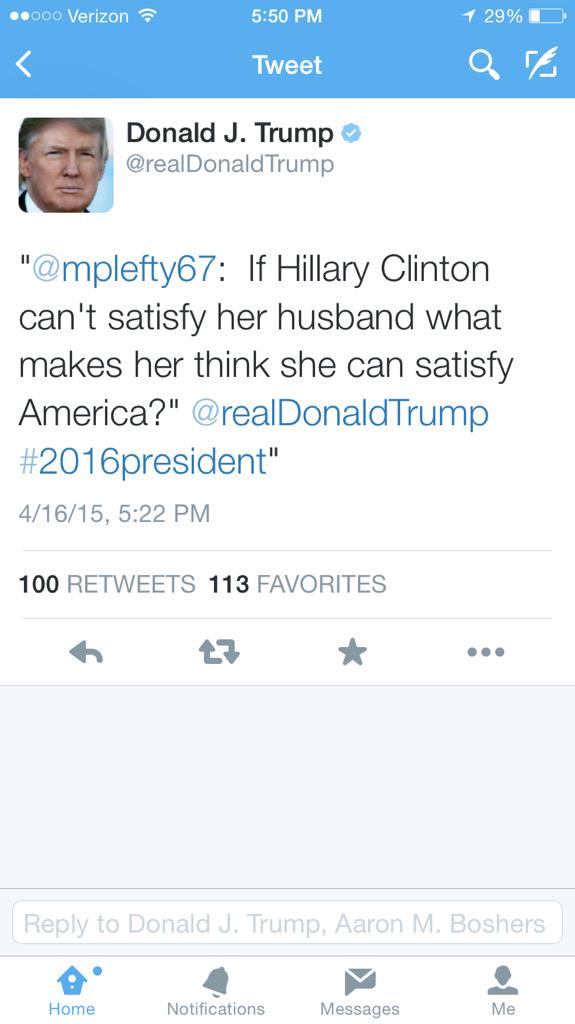 And again, conservative Catholics, burning with passion for the Five Non-Negotiables showed up on Facebook to explain that it was a joke, that I am a secret Hillary supporter for rejecting this vile junk, that I am “jealous” of Trump and that he is a gutsy truthteller who says things lesser mortals are afraid to say, and beside he took it down after impulsively retweeting it, so his impulsive finger should *definitely* be on the button of our nuclear aresenal and he deserves our support as he makes America great again.  Cuz insulting Hillary’s looks and sex life is what the Five Non-Negotiable are all about, man!

And who can argue with such insight and perception into the Eternal Values that really matter to right-thinking Catholics? No doubt he will certainly restore dignity to the office of President with not-at-all  creepy remarks like this:

Now it’s true that opposing gross incestuous winks and nods *isn’t* one of the Five Non-Negotiables, so Catholics who care about the reputation of the Church in the public square should by all means continue going to the mat for this gutsy truthteller who is not afraid to say things other, more PC, wimps won’t!  Who could doubt it?  The man is practically the apostle Paul!

Speaking of whom, here’s the deal: Paul tells us: “See to it that no one makes a prey of you by philosophy and empty deceit, according to human tradition, according to the elemental spirits of the universe, and not according to Christ.” (Col 2:8). You could hardly find a philosophy and an empty deceit, according to human tradition, more patently obvious if you tried than the torrent of mammon worship, racism, vainglory, pride, brutal vulgarity, and egoism that flows from the mouth of Donald Trump.  The spectacle of Catholics completely setting aside the Five Non-Negotiables and going to bat for *this* guy is about as anti-evangelical as you can get.  If you support him, don’t give the world any song and dance about your devotion to the five non-negotiables.  You are using the unborn as human shields on behalf of a man who could not possibly care less about the gospel.  Your lust for power has blinded you.  Repent.

The customary reply of the Party of Personal Responsibility when faced with yet another epic failure of judgment is to cry, “NO! THEM! Democrats do whatever stupid thing it is we are caught doing today!  If you don’t blame them more then you secretly support them!”

Now, while it is true that Dems are quite as able to replace the revelation of Christ with philosophies and empty deceits based on the human wisdom (as, for instance, when Jimmy Carter recently declared that Jesus would be just thrilled with gay “marriage”) what is steadfastly overlooked by the Party of Personal Responsibility are the words of Jesus: “What is that to thee?  Follow thou me!”  The penitential rite does not begin “I confess to Almighty God, and to you my brothers and sisters, that Those Guys over there have sinned….”  The Party of Personal Responsibility should try taking some.

And it’s not too late to do that.  We can repent of trying to build the kingdom with the weapons of this world and we can still determine that we will live according to Christ and not the philosophies and empty deceits of human wisdom.

Ah, sinful nation,
a people laden with iniquity,
offspring of evildoers,
sons who deal corruptly!
They have forsaken the LORD,
they have despised the Holy One of Israel,
they are utterly estranged.

Why will you still be struck down,
that you continue to rebel?
The whole head is sick,
and the whole heart faint.
From the sole of the foot even to the head,
there is no soundness in it,
but bruises and sores
and bleeding wounds;
they are not pressed out, or bound up,
or softened with oil.

Wash yourselves; make yourselves clean;
remove the evil of your doings
from before my eyes;
cease to do evil,
learn to do good;
seek justice,
correct oppression;
defend the fatherless,
plead for the widow.

“Come now, let us reason together,
says the LORD:
though your sins are like scarlet,
they shall be as white as snow;
though they are red like crimson,
they shall become like wool.
If you are willing and obedient,
you shall eat the good of the land;
but if you refuse and rebel,
you shall be devoured by the sword;
for the mouth of the LORD has spoken.” (Is 1:4–6, 16-20).

July 11, 2015 Happy Belated Birthday, Quartermaster of the Barque!
Recent Comments
109 Comments | Leave a Comment
"Late to the game, but while I agree with him that the end doesn’t justify ..."
Catherine Hobbs Building Bridges of Trust vs. Winning
"I also think netflix is more evil than good, the things they have and support ..."
Jackson A reader struggles with scruples about ..."
"I am pretty sure remote cooperation is evil unless with proportionate reasons..."
Jackson A reader struggles with scruples about ..."
"Just one nit - the Dickey Amendment (the bit of law that supposedly "forbids" the ..."
Jon Heresy of the Day: Antinomianism
Browse Our Archives
get the latest from
Catholic
Sign up for our newsletter
POPULAR AT PATHEOS Catholic
1

Catholic
"This is my Church and This is How...
Catholic and Enjoying It!

Catholic
The one absolutely consistent constant of our foreign...
Catholic and Enjoying It!

Catholic
The Party of Personal Responsibility's Severed Corpus Callossum
Catholic and Enjoying It!

Catholic
Dear Evangelicals: You're being had
Catholic and Enjoying It!
TRENDING AT PATHEOS Catholic

What God Can Do With Suffering
Christians are supposed to rejoice in our weaknesses. I don't really know...
view all Catholic blogs
What Are Your Thoughts?leave a comment
Copyright 2008-2021, Patheos. All rights reserved.