On Churches and Ecclesial Communities

A reader remarks on the tiny kerfuffle among a few Orthodox bishops who said the Catholic Church is not a real Church the other day:

Gives me a chuckle as the tables are turned on us Romans. Didn’t Benedict once describe Protestants as “ecclesial communities”?

Partly correct. Except it was not “Benedict” and its was not a private opinion. Its was the teaching of Holy Church in Dominus Iesus. Because at the heart of the Church is the Eucharist and if there is not a valid Eucharist the Church is not present in its fullness. So the Church distinguishes between true Churches (including, by the way, eastern Churches not in communion with Rome) and “ecclesial communities” which preserve valid baptism but do not have a valid Eucharist (indeed, in some communities, who actively reject not merely a valid Eucharist but any need for any form of communion, symbolic or otherwise). It’s a perfectly rational distinction and is not intended as an insult, but as clarity.

June 4, 2016
Dropping the Atomic Bomb Was Wrong. Period.
Next Post

June 4, 2016 Excellent! A fight to abolish the death penalty led by conservatives
Recent Comments
0 | Leave a Comment
Browse Our Archives
get the latest from
Catholic
Sign up for our newsletter
POPULAR AT PATHEOS Catholic
1 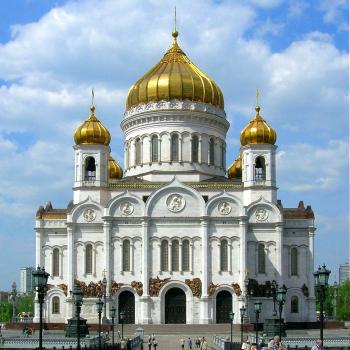 Catholic
Interesting Piece on the Re-Christianization of Russia
Catholic and Enjoying It!

Catholic
David B. Hart on The Myth of Schism
Catholic and Enjoying It!
TRENDING AT PATHEOS Catholic