…are under discussion over at Catholic Weekly.

First things first: the gospels were not written long after the events. They and almost all the New Testament documents are written within the lifetime of the apostles or within living memory of them. They have all the earmarks of eyewitness testimony from people who are writing memoirs, not inventing legends. Mark, for instance, is probably separated from the death and Resurrection of Jesus by a smaller span of time than we are separated from the death of John Lennon.

They cite eyewitnesses and, what is more, they cite testimony nobody inventing a fraud would cite. If you are inventing a God Man, you don’t quote him saying he does not know something, but the gospels repeatedly quote Jesus asking questions because he wants information, not because he is speaking rhetorically. They even cite Jesus professing that he does not know when the end of the world will be (Matthew 24:36; Mark 13:32). And they record Jesus crying out “My God, my God, why have you forsaken me?” (Matthew 27:46) while hanging on the Cross, which was taken as absolute confirmation of his rejection by God in the eyes of most of their countrymen since, “Cursed is he who hangs upon a tree” (Deuteronomy 21:23). Only honest people record information that affords their opponents an obvious prima facie case against their central point.

And honest people do not go around stealing bodies and announcing resurrections. Nor do they go out of their way to carefully record their own massive sins, cowardice, betrayals, epic failures and stupidity. But the gospels do all these things. All four carefully record the sins of the apostles, culminating in their utter abandonment of Jesus on Holy Thursday. If the mission of the gospels is to set up the apostles as Jesus’ loyal Right Hand Men, the mission was not accomplished. They don’t even believe the Resurrection. It falls to women who barely figure in the gospel accounts to encounter the Risen Christ first. And not just any women but the band headed by Mary Magdalene “from whom he had cast out seven demons.” (Mark 16:9).

She is, in ancient Mediterranean culture–both Jewish and Greco-Roman–the worst witness in the world for a pack of liars to call as their first witness to the Resurrection, having all the credibility of a UFO abductee in that culture. Indeed, under Jewish law a woman’s testimony was not even admissible in court. So why do the gospels insist on putting her first in the Resurrection narratives? The answer of the Christian tradition is, “Because it’s what actually happened.”

See the link for the rest.

April 17, 2017
That's what Easter is All About, Charlie Brown
Next Post

April 17, 2017 Last Wednesday, Rod Bennett and I talked about Judas Iscariot
Recent Comments
0 | Leave a Comment
"Thank you for posting this interesting article."
Rendell Dolan Building Bridges of Trust vs. Winning
"Now I can't wait to take off my pants and enjoy it!👉----->>>HTTP://TELFS-3D.NET/JM27258s"
John C Memorial Day
"My body got hotter and hotter until I was soaked through.😉😉----->>>HTTP://TELFS-3D.NET/GD27258L"
StarkBanik Building Bridges of Trust vs. Winning
"No one knows your love better than I do! Believe me, this cartoon website has ..."
palanca_preta First Things: Against the Living Consensus
Browse Our Archives
Related posts from Catholic and Enjoying It!

Catholic
Resurrection, by John Donne
Catholic and Enjoying It! 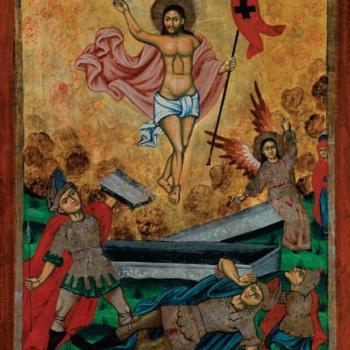 Catholic
Easter
Catholic and Enjoying It!

Catholic
A Sonnet for Christmas
Catholic and Enjoying It!
TRENDING AT PATHEOS Catholic