The Alt Right Attempt to Co-Opt the Family

This pic was taken from Alt Right sites, and shared round by catholics, with a quotation from JPII slapped on.

I am going to hope that they simply weren’t thinking, or are unaware that “saving the west” is a dog-whistle for white supremacy (things l learned in my conservative grad program, not as a raging SJW, btw).

Please. Our goal is not to “save the west” but rather to defend ALL life, and to live the gospel. From east to west.

And procreation for a political end does as much violence to sex and marriage as using a person for pleasure does.

The transformation of the Catholic Faith into a mere white fertility cult is deeply sinister.  The Faith is the greatest friend of the family there is.  And because the family is under severe attack, it is easy to develop tunnel vision and make it the ultimate goal.  That is what the devil wants, because any earthly good will do for him in creating idols and the higher the earthly good, the more easy to erect as the competitor to God as the idol.

Jesus, knowing this, has to issue a challenge even to the family as the highest good:

“If any one comes to me and does not hate his own father and mother and wife and children and brothers and sisters, yes, and even his own life, he cannot be my disciple.” (Lk 14:26).

Do *not* be fooled by the Alt Right liars on this point.  The family is a great good, but it is not the highest good.  Turned into a god, the family will, like all idols, kill and destroy.  The family is the building block of society and must be defended, it is true.  But building blocks are for building and the family, as Jesus points out, exists to serve the kingdom of heaven, which stretches to every race, language, tribe, and tongue.  It does not exist as a selfish unit for the service of white supremacy, nor as a slave to the state, nor as an atomized libertarian tribe with no debt to the common good.  It is to be the natural school of charity upon which grace builds, not a hatchery for a Master Race.

October 5, 2017
Scripture on "Thoughts and Prayers" as Hypocritical Prophylactic Against Obedience
Next Post 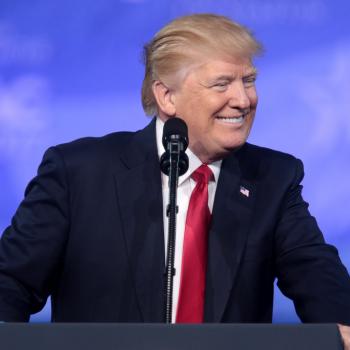 Catholic
Richard Spencer, who was, never let it be...
Catholic and Enjoying It!

Catholic
Catholics have a moral obligation...
Catholic and Enjoying It!
TRENDING AT PATHEOS Catholic