Got this press release, which is cool enough to share:

Australian scientists have announced an “unparalleled” astrophysical discovery revealing that they have detected gravitational waves from the death spiral of two neutron stars.

Less than a month after three US professors were awarded the Nobel Prize in Physics for the 2015 discovery of gravitational waves, a team of Australian astrophysicists, including Swinburne researchers, have announced a new international discovery.

It is the first time a cosmic event has been observed and measured in both light and gravitational waves.

Swinburne hosts the $31.3 million Australian Research Council’s Centre of Excellence for Gravitational Wave Discovery (OzGrav) which was established last year to capitalise on the original discovery of gravitational waves.

Swinburne’s Professor Matthew Bailes, Director of OzGrav, says the new discovery has enabled scientists to pinpoint the origin of gravitational waves and to actually see “the colossal event” that accompanied the gravitational waves.

“This was the first time that any cosmic event was observed through both the light it emitted and the gravitational ripples it caused in the fabric of space and time,” Professor Bailes says.

“The subsequent avalanche of science was virtually unparalleled in modern astrophysics.” 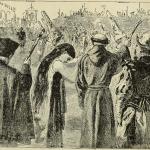 October 19, 2017
Right Now is the Greatest Period of Christian Persecution in History
Next Post

October 19, 2017 Going to the Dogs
Recent Comments
0 | Leave a Comment
Browse Our Archives
get the latest from
Catholic
Sign up for our newsletter
POPULAR AT PATHEOS Catholic
1

How White Men Lost the Meaning...
suspended in her jar
Related posts from Catholic and Enjoying It!

Catholic
Saturday is a Good Day to Learn Some...
Catholic and Enjoying It!

Catholic
I used to work at Fred Hutch, so...
Catholic and Enjoying It!

Catholic
A reader has a question about the Fall...
Catholic and Enjoying It!
TRENDING AT PATHEOS Catholic