It could have gone to help the people of Puerto Rico Trump has spat on and ridiculed.

But no, instead he blew it on sending Mike Pence to a ball game and ordering him to stage a walkout in order to gin up his white jingo base. You know, the ones who really care about “small government” and not wasting our tax dollars. Best part: the back to back phony tweets where Pence tries to make it look like this was a spontaneous act of conscience “for the troops” 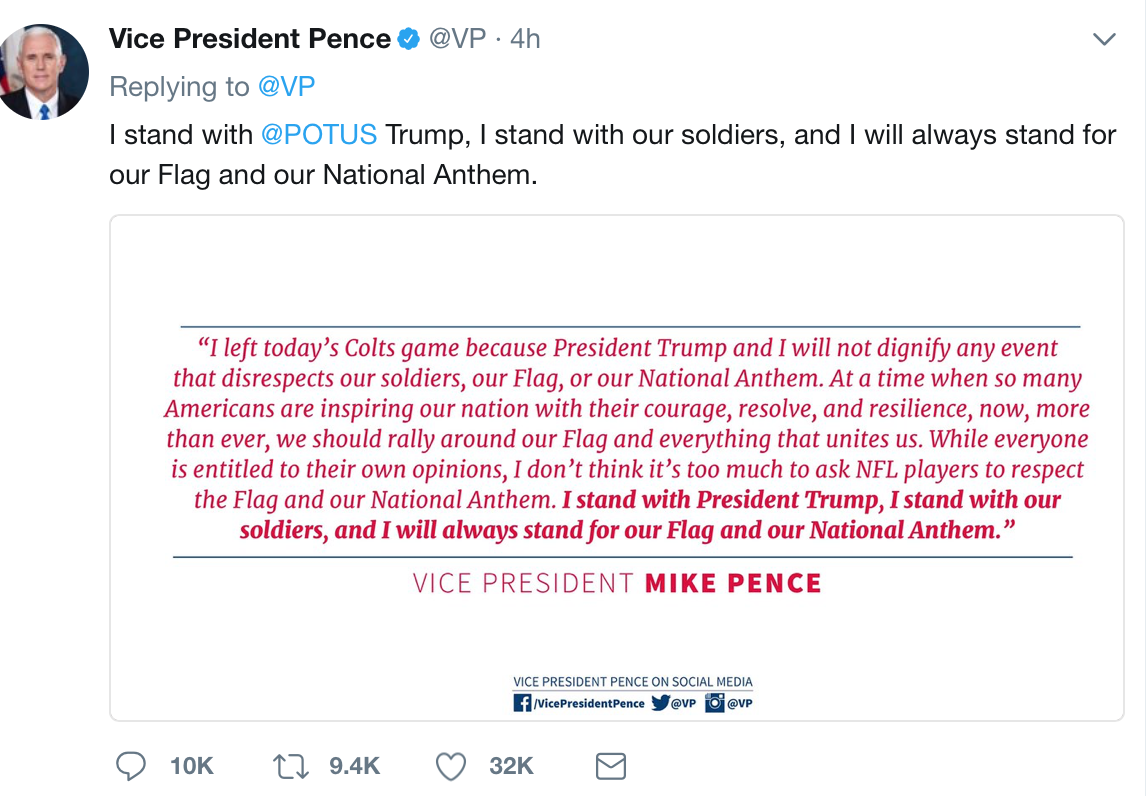 followed by Trump making clear he ordered the whole thing

I asked @VP Pence to leave stadium if any players kneeled, disrespecting our country. I am proud of him and @SecondLady Karen.

In short, a stunt to please his base of white racists–and all for the low, low cost to the taxpayer of quarter of a million bucks when Pence could have just stayed home and laid on the couch during the anthem like the rest of his phony patriot base.

And all this fakeriotic “respect the troops” shinola to gin up poll numbers for a draft-dodger with phony “bone spurs” who called his years of fearing venereal disease his “personal Vietnam” and who took a dump on POWs and Gold Star families.

October 9, 2017
The Gospel Approach to the Goods of this World
Next Post

October 9, 2017 Blood, Tribe, Jonah and the Good Samaritan
Recent Comments
0 | Leave a Comment
"Modern literature = pornography"
aeolian soundings Franciscan University Hands Over Control to ..."
"The author of an extremely wordy article has been raging on and on and on. ..."
aeolian soundings Franciscan University Hands Over Control to ..."
"What a wonderful response !!! I even signed in, --- to tell you this. I ..."
thomasina Catholic Reactionaries and Jew Hatred are ..."
"Swings and misses across the board, Linda."Pure evil"? Well, I hope you can avoid throwing ..."
Tim Lambert What has the “Prolife” MAGA Cult ..."
Browse Our Archives
get the latest from
Catholic
Sign up for our newsletter
POPULAR AT PATHEOS Catholic
1