In fairyland we avoid the word “law”; but in the land of science they are singularly fond of it. Thus they will call some interesting conjecture about how forgotten folks pronounced the alphabet, Grimm’s Law. But Grimm’s Law is far less intellectual than Grimm’s Fairy Tales. The tales are, at any rate, certainly tales; while the law is not a law. A law implies that we know the nature of the generalisation and enactment; not merely that we have noticed some of the effects. If there is a law that pick-pockets shall go to prison, it implies that there is an imaginable mental connection between the idea of prison and the idea of picking pockets. And we know what the idea is. We can say why we take liberty from a man who takes liberties. But we cannot say why an egg can turn into a chicken any more than we can say why a bear could turn into a fairy prince. As ideas, the egg and the chicken are further off from each other than the bear and the prince; for no egg in itself suggests a chicken, whereas some princes do suggest bears. Granted, then, that certain transformations do happen, it is essential that we should regard them in the philosophic manner of fairy tales, not in the unphilosophic manner of science and the “Laws of Nature.” When we are asked why eggs turn to birds or fruits fall in autumn, we must answer exactly as the fairy godmother would answer if Cinderella asked her why mice turned to horses or her clothes fell from her at twelve o’clock. We must answer that it is magic. It is not a “law,” for we do not understand its general formula. It is not a necessity, for though we can count on it happening practically, we have no right to say that it must always happen. It is no argument for unalterable law (as Huxley fancied) that we count on the ordinary course of things. We do not count on it; we bet on it. We risk the remote possibility of a miracle as we do that of a poisoned pancake or a world-destroying comet. We leave it out of account, not because it is a miracle, and therefore an impossibility, but because it is a miracle, and therefore an exception. All the terms used in the science books, “law,” “necessity,” “order,” “tendency,” and so on, are really unintellectual, because they assume an inner synthesis, which we do not possess. The only words that ever satisfied me as describing Nature are the terms used in the fairy books, “charm,” “spell,” “enchantment.” They express the arbitrariness of the fact and its mystery. A tree grows fruit because it is a magic tree. Water runs downhill because it is bewitched. The sun shines because it is bewitched.

I deny altogether that this is fantastic or even mystical. We may have some mysticism later on; but this fairy-tale language about things is simply rational and agnostic. It is the only way I can express in words my clear and definite perception that one thing is quite distinct from another; that there is no logical connection between flying and laying eggs. It is the man who talks about “a law” that he has never seen who is the mystic. Nay, the ordinary scientific man is strictly a sentimentalist. He is a sentimentalist in this essential sense, that he is soaked and swept away by mere associations. He has so often seen birds fly and lay eggs that he feels as if there must be some dreamy, tender connection between the two ideas, whereas there is none. A forlorn lover might be unable to dissociate the moon from lost love; so the materialist is unable to dissociate the moon from the tide. In both cases there is no connection, except that one has seen them together. A sentimentalist might shed tears at the smell of apple-blossom, because, by a dark association of his own, it reminded him of his boyhood. So the materialist professor (though he conceals his tears) is yet a sentimentalist, because, by a dark association of his own, apple-blossoms remind him of apples. But the cool rationalist from fairyland does not see why, in the abstract, the apple tree should not grow crimson tulips; it sometimes does in his country.

I’ve never seen any conflict between that and Feynman’s delightful curiosity about the world.

Here’s more of this wonderful man:

November 16, 2017
Connecting the Dots on the True Cross, the Titulus...
Next Post 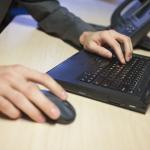 Catholic
Saturday is a Good Day to Learn Some...
Catholic and Enjoying It!
TRENDING AT PATHEOS Catholic

My review of Michael Ward's After Humanity, a...
Many readers are familiar with C. S. Lewis' The Abolition of Man....
view all Catholic blogs
What Are Your Thoughts?leave a comment
Copyright 2008-2021, Patheos. All rights reserved.