Ezra Klein does the autopsy on Trump NY Times interview from last week.  First, he look at the lying and self-delusion:

The president of the United States is not well. That is an uncomfortable thing to say, but it is an even worse thing to ignore.

Consider the interview Trump gave to the New York Times on Thursday. It begins with a string of falsehoods that make it difficult to tell whether the leader of the free world is lying or delusional. Remember, these are President Donald Trump’s words, after being told a recording device is on:

It almost goes without saying that literally zero congressional Democrats have said that there was no collusion between Russia and the Trump campaign during the 2016 election. Zero.

What key Democrats are actually saying is closer to the opposite. On December 20, for instance, Sen. Mark Warner, the vice chair of the Senate Intelligence Committee and thus the Senate Democrat leading the investigation into collusion, said, “despite the initial denials of any Russian contacts during the election, this Committee’s efforts have helped uncover numerous and troubling high-level engagements between the Trump campaign and Russian affiliates — many of which have only been revealed in recent months.”

Of course, his Christianist fanboi won’t care since the only metric by which they measure his lies is whether they work, not whether they are true.  And by “work” what is meant is “Do they fool suckers?” and “Do they piss off liberals?”  As a rule, Trump’s lies do both, so Christianists count all that as a win.

Christians, in contrast, care about truth.  But that is old-fashioned since the Christianists took over conservative Christianity and sold everybody on the glories of the Noble Lie.  As long as you can tell yourself that Liars for Jesus are all exactly like people saving Jews from Nazis you can tell any lie you like and congratulate yourself as a hero while lying that your critics would “lie to attack prolifers but not to save Anne Frank or babies“.  The result is a Christianist political cult that thrives on lies and which adores a liar.  Good job, Christianists.

Next comes the worship of power:

A few paragraphs later, for instance, Trump offers this chilling comment when asked about Hillary Clinton’s emails (which, amazingly, we are somehow still talking about in December 2017):

NYT: You control the Justice Department. Should they reopen that email investigation?

TRUMP: What I’ve done is, I have absolute right to do what I want to do with the Justice Department. But for purposes of hopefully thinking I’m going to be treated fairly, I’ve stayed uninvolved with this particular matter.

Read Trump’s phrasing carefully: “I have absolute right to do what I want to do with the Justice Department.” It’s a statement that speaks both to Trump’s yearning for authoritarian power and his misunderstanding of the system in which he actually operates.

And it’s followed by something yet scarier. “For purposes of hopefully thinking I’m going to be treated fairly, I’ve stayed uninvolved with this particular matter,” he says.

Here, Trump offers insight into his own thinking. He appears to believe that he is engaged in some explicit or implicit quid pro quo with the Department of Justice: He doesn’t fire Jeff Sessions, or demand prosecution of his political enemies, or whatever it is he imagines doing with his “absolute right to do what I want to do,” so long as they treat him and his associates “fairly,” which likely means protecting him from Mueller’s investigation.

Imagine reading this comment on transcripts from Richard Nixon’s tapes. It would be the kind of comment that would leave us glad Nixon was forced from office, chilled that such a man ever occupied the presidency at all.

The interview, of course, is not done.

NYT: Do you think Holder was more loyal to …

Read that again. Trump’s premise in this section appears to be that President Obama engaged in a wide array of criminal, undemocratic, and negligent behaviors but his attorney general protected him from justice. And Trump’s conclusion is that Obama’s attorney general did his job well. To Trump, the attorney general doesn’t serve the country, or the Constitution, but the president.

Trump’s assessment of the state as existing to serve him goes with the Christianist assessment as well: he was chosen by God, so we better obey him:

There’s a ton more, which you should read, as well as the interview itself. Klein, a patriot, concludes for the good of his country:

This is the president of the United States speaking to the New York Times. His comments are, by turns, incoherent, incorrect, conspiratorial, delusional, self-aggrandizing, and underinformed. This is not a partisan judgment — indeed, the interview is rarely coherent or specific enough to classify the points Trump makes on a recognizable left-right spectrum. As has been true since he entered American politics, Trump is interested in Trump — over the course of the interview, he mentions his Electoral College strategy seven times, in each case using it to underscore his political savvy and to suggest that he could easily have won the popular vote if he had tried.

I am not a medical professional, and I will not pretend to know what is truly happening here. It’s become a common conversation topic in Washington to muse on whether the president is suffering from some form of cognitive decline or psychological malady. I don’t think those hypotheses are necessary or meaningful. Whatever the cause, it is plainly obvious from Trump’s words that this is not a man fit to be president, that he is not well or capable in some fundamental way. That is an uncomfortable thing to say, and so many prefer not to say it, but Trump does not occupy a job where such deficiencies can be safely ignored.

Trump is Trump.  He will not change, barring a miracle.  The trouble is the Christianist heresy that constitutes his base.  We saw it also on full display in the lies undergirding Roy Moore’s campaign of falsehoods.  The trendy idea, popular in many Evangelical circles, of the “word of faith” and “name it and claim it” has strong affinities with the blasphemous fascistic notion of the magical power of the word of the Dear Leader to shape reality by his sovereign will. This blasphemous magical belief is on full display with Trump’s continual stream of lies purporting to alter reality on a daily basis. In truth, however, God creates reality by the power of the Word. Man is to cooperate with God’s creative act, not blasphemously arrogate it to himself. When he tries, he inevitably destroys himself by sealing himself into a fragile bubble of unreality that is soon destroyed by contact with reality. The harder he tries to shout reality down with his magical words, the more catastrophic the destruction when reality finally asserts itself. 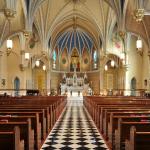