Scripture for an Ash Wednesday Massacre

Re: thoughts and prayer from bought and paid for pols, Right Wing Noise Machine Liars, and NRA accomplices to today’s slaughter, a reading from the prophet Isaiah:

Hear the word of the LORD,
you rulers of Sodom!
Give ear to the teaching of our God,
you people of Gomorrah!
“What to me is the multitude of your sacrifices?
says the LORD;
I have had enough of burnt offerings of rams
and the fat of fed beasts;
I do not delight in the blood of bulls,
or of lambs, or of he-goats.

“When you come to appear before me,
who requires of you
this trampling of my courts?
Bring no more vain offerings;
incense is an abomination to me.
New moon and sabbath and the calling of assemblies—
I cannot endure iniquity and solemn assembly.
Your new moons and your appointed feasts
my soul hates;
they have become a burden to me,
I am weary of bearing them.
When you spread forth your hands,
I will hide my eyes from you;
even though you make many prayers,
I will not listen;
your hands are full of blood.
Wash yourselves; make yourselves clean;
remove the evil of your doings
from before my eyes;
cease to do evil,
learn to do good;
seek justice,
correct oppression;
defend the fatherless,
plead for the widow.

“Come now, let us reason together,
says the LORD:
though your sins are like scarlet,
they shall be as white as snow;
though they are red like crimson,
they shall become like wool.
If you are willing and obedient,
you shall eat the good of the land;
but if you refuse and rebel,
you shall be devoured by the sword;
for the mouth of the LORD has spoken.” (Is 1:10–20).

And a reading from the epistle of James:

What does it profit, my brethren, if a man says he has faith but has not works? Can his faith save him?† If a brother or sister is poorly clothed and in lack of daily food, and one of you says to them, “Go in peace, be warmed and filled,” without giving them the things needed for the body, what does it profit? So faith by itself, if it has no works, is dead.

But some one will say, “You have faith and I have works.” Show me your faith apart from your works, and I by my works will show you my faith. You believe that God is one; you do well. Even the demons believe—and shudder. Do you want to be shown, you foolish fellow, that faith apart from works is barren? Was not Abraham our father justified by works, when he offered his son Isaac upon the altar? You see that faith was active along with his works, and faith was completed by works,  and the Scripture was fulfilled which says, “Abraham believed God, and it was reckoned to him as righteousness”; and he was called the friend of God. You see that a man is justified by works and not by faith alone. And in the same way was not also Rahab the harlot justified by works when she received the messengers and sent them out another way? For as the body apart from the spirit is dead, so faith apart from works is dead. (Jas 2:14–26).

And here is Jesus warning to those who have the power to *do* something to, for instance, make it difficult for butchers to have easy access to the technology of slaughter but do not *act* in obedience to God:

Rend your hearts, not your garments.  The Gun Cult’s sole response to our gun slaughter rate is a slew of mindless slogans all having in view two goals: a) assuage their utter narcissistic self-involvement that is utterly blind to the victims (“Screw you! Don’t touch my gun!”); and b) one monomaniac prescription: “MOAR GUNS!”  The use of “thoughts and prayers” as a cloak for maintaining an adamantine will that what occurred today will go on forever and ever will not, as the Lord lives, save any person covers that will with “thoughts and prayers.”  Thoughts and, above all, prayers are supposed to be spurs to active obedience, not a prophylactic for passive-aggressive refusal to obey God. 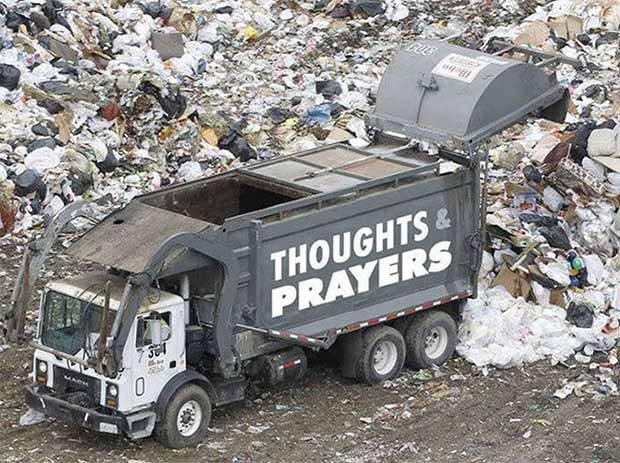 February 15, 2018 Amazing What a Pretty Face Can Get Away With
Recent Comments
0 | Leave a Comment
Browse Our Archives
Related posts from Catholic and Enjoying It!