Colbert and Tolkien vs. Trump

One of the reasons the gospel spread like wildfire among the poor of the Roman Empire (which was most of the Roman Empire, especially in urban areas) was that it insisted that when God had become man, he had joined the least of these in their lot. He’d lived the life of a manual laborer in a conquered piece of land and had wound up, not living the lifestyle of the rich and famous, but sharing in the victimhood that is the life of most of the human race, especially at the bottom. When he told his disciples to live the life of the cross, he led by example. He knew what it was to endure suffering, hunger, betrayal, and death.

And in the early centuries of the Church, he was not burdened with the terrible problem of being respectable and conventional and the symbol of the conqueror. This is how the respectable spoke of him: 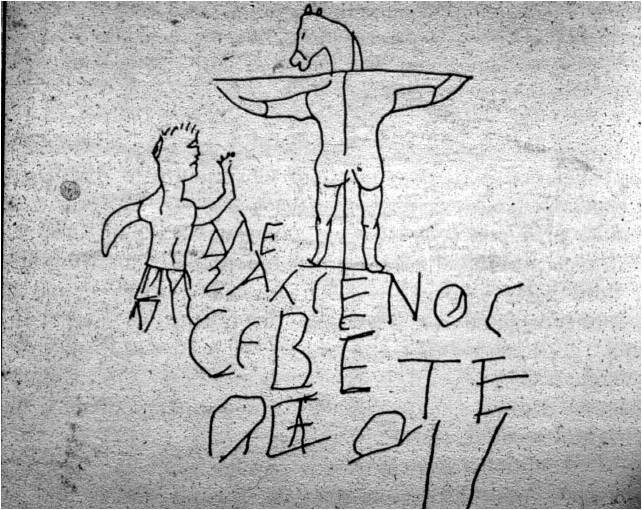 “Alexamenos worships his god” was a pretty typical criticism of Jesus and his Church in imperial Roman culture.  Crucifixion was for losers.  Ergo, Jesus and his followers were losers.  And his followers were grateful to a God who was willing to be a loser, like them.  So Paul would write the Philippians to revel in the God who joined us in our loserdom, reciting a hymn popular in the Church of his time:

“Christ Jesus, who, though he was in the form of God, did not count equality with God a thing to be grasped, but emptied himself, taking the form of a servant, being born in the likeness of men. And being found in human form he humbled himself and became obedient unto death, even death on a cross. Therefore God has highly exalted him and bestowed on him the name which is above every name, that at the name of Jesus every knee should bow, in heaven and on earth and under the earth, and every tongue confess that Jesus Christ is Lord, to the glory of God the Father” (Phil 2:5-11).

This willingness to forsake privilege and share in the sufferings of others for the sake of love is one of the marks of the gospel.  Jesus acts it out on Holy Thursday when he takes the place of a slave to wash the apostles’ feet.  But this symbolic gesture is only a sign.  The full reality comes the next day when he literally takes the place of Spartacus and the other slaves who lined the roads for miles on their crosses.  Crucifixion was the most shameful abasement in antiquity.  It carried with it not only the stigma of crime, but (in Jewish thinking) the curse of God: “Cursed is he who hangs upon a tree”.

The realization (in light of the Resurrection) was that Jesus had not simply stayed up in heaven telling underlings to suck it up and suffer because it was the natural order for the poor to endure what the powerful dished out to them.  He had emptied himself to suffer what the poor suffer so that they, in turn, could share in his heroism and enjoy his exaltation.

It is the difference between rich man demanding others die while he lives in comfort and a commander who lives (and dies) for his troops in desperate battle.  It’s the difference between those who said pious things to lepers before exiling them to Molokai, and Father Damien, who went to live with those lepers and, in the end, became one of them.

And it is the difference between the empty praise of this man (whose sole contribution to the suffering of health care workers has been to make 1.5 million COVID victims while doing all in his power to make sure those workers have to wear garbage bags while they treat them)….

….and this guy, who talks movingly of suffering and death as well:

The reason Colbert (and Tolkien) can speak with moving power of suffering and death is, very simply, that have truly experienced them in their guts and bones and truly empathize with those who suffer.  Indeed, Tolkien’s suffering (both as an orphan and in the trenches of WWI where he lost most of his dearest friends and watched a generation be maimed and die) made him a source of healing and consolation for Colbert, who lost his father and brothers in a plane crash when he was ten.  When he says, “What punishments of God are not gifts?” you may be shocked, you may disagree, you may be baffled, but you cannot say of him that he is just a shallow exploiter blowing smoke up your ass.  He speaks from the deepest part of his soul, as did Tolkien.

It is this that, more than anything, constitutes the difference between genuine Christian witness in this hour and the cynical, lying MAGA freak show that claims to be “truly Christian” while driving suffering people (and simple decent people) away in droves with a false gospel that say, “You need to get out there and sicken and die for me and I am going to force you to do it.”

Pope Paul VI understood the dynamic in 1975 when he said, “Modern man listens more willingly to witnesses than to teachers, and if he does listen to teachers, it is because they are witnesses.”  It is true that a teacher can be a bad person and still teach the truth.  2+2 still equals 4 even if your math teacher cheats on his taxes.  Christ remains risen even if the priest telling you that is an abusive jackass.  But there is a difference between teaching something and communicating it. Indeed, teaching truth while refusing to live it is the best way to vaccinate those we speak to against the truth we speak.

Until the gospel finds a home in the heart of the hearer, it remains mere words.  And when MAGA Christians make clear that they do not, themselves, trust Jesus they only make it harder for those who seek him to find him.  Witnesses like Colbert and Tolkien who have borne the cross and show genuine empathy with those who suffer are infinitely more credible than those who say to the suffering in a pandemic that if they be like to die they had better do it and help decrease the surplus population.  Many of those who are unbelievers in this hour are not unbelievers in the gospel.  You can tell that by the fact that they try to live as Jesus commands and they beg Christians to do likewise.  Indeed, they often strike me as people who are longing to find out that, somewhere, the gospel is real and is being lived.  They aren’t deaf to the word of Jesus.  They are listening for it intently.  When they reject the MAGA gospel it’s not because they don’t want to hear the real one.

It’s because Jesus “calls his own sheep by name and leads them out.When he has brought out all his own, he goes on ahead of them, and his sheep follow him because they know his voice. But they will never follow a stranger; in fact, they will run away from him because they do not recognize a stranger’s voice” (John 10:3-5).

May 20, 2020
First Things: Against the Living Consensus
Next Post

Catholic
First Things: Against the Living Consensus
Catholic and Enjoying It!
TRENDING AT PATHEOS Catholic