Jesus surprised to learn Christianity is not a religion

From the delightful Babylon Bee:

HEAVEN—Jesus Christ, the Son of God and Savior of the world, was recently surprised to learn that Christianity is not a religion, heavenly sources reported Friday.

“The Lord noticed a viral YouTube video claiming ‘Jesus hates religion,’ and then a popular blog post declaring ‘Christianity is NOT a religion,’ and His immediate reaction was something like, ‘Wait, what?’” a seraph disclosed to reporters.

“He reminded us that while on earth, He went to synagogue and observed Jewish holy days. He also founded the Christian church, instituted rituals, commanded his disciples to baptize people and teach them to obey everything He said,” the angelic being said, adding that Jesus also insisted that people maintain specific beliefs, consider fellow believers family, and hold Him as the one central guiding point of their lives.

“And let’s not forget the New Testament at large, what with its call for believers to meet regularly, its organizing principles, and its design for church structure and authority. Oh, and that part in the Book of James about caring for orphans and widows and keeping ourselves unstained from the world—I mean, he actually says ‘Pure religion is this…’” he added. “You know, pretty religious-y stuff.”

“Maybe these folks meant to say that Christianity is not a false religion? I dunno,” the seraph said.

If you say Christianity is not a religion, do be aware that James, the first bishop of Jerusalem and a blood relative of Jesus Christ, thinks you are wrong:

Here’s a snippet from a piece I wrote about this some time back:

Depending on who you talk to, religion means various things, all of them bad. For some, it means mystical mumbo jumbo like a lucky rabbit’s foot: a thing to be patronizingly indulged until it conflicts with the consensus of up-to-date people. For others, it is Bronze Age savagery that, in the memorable phrase of Christopher Hitchens, “poisons everything” — an evil thing to be terminated with extreme prejudice. For others, particularly of the “Why I hate religion, but love Jesus” or “I’m not religious, I just love the Lord!” variety, it is a human creation that cuts the heart off from a personal relationship with Jesus and encrusts the Gospel in an impenetrable husk devoid of living faith, hope and charity.

But in biblical (which is to say Catholic) parlance, religion is not a bad thing but a good thing. St. Paul, for instance, in 1 Timothy says: “Undeniably great is the mystery of devotion, who was manifested in the flesh, vindicated in the spirit, seen by angels, proclaimed to the Gentiles, believed in throughout the world, taken up in glory” (3:16).

Likewise, James remarks: “If anyone thinks he is religious and does not bridle his tongue but deceives his heart, his religion is vain. Religion that is pure and undefiled before God and the Father is this: to care for orphans and widows in their affliction and to keep oneself unstained by the world” (Jas 1:26–27).

In short, the problem is not religion but those who “make a pretense of religion but deny its power” (2 Tm 3:5). Religion derives from the Latin “religare” meaning “obligation, bond, reverence.” In other words, it refers to our bond of sacred kinship to God and to neighbor. What kind of bond is that? Love. When we perform acts of worship to God and acts of love toward our neighbor, we are living out what the Catholic Faith (and the New Testament) means by loving the Lord with all your heart, mind, soul and strength and loving your neighbor as yourself. That is truly living a relationship.

Catholic
Unto Us Child is Born
Catholic and Enjoying It! 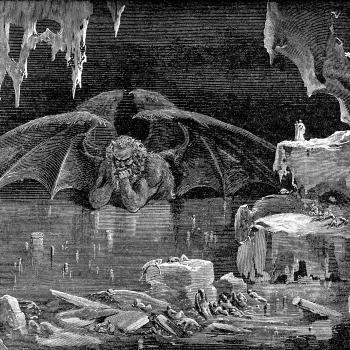 Catholic
Here's a little blast from the past...
Catholic and Enjoying It!

Catholic
The Many Paradoxes of Thanksgiving
Catholic and Enjoying It!
TRENDING AT PATHEOS Catholic