Here is all we actually, documentably know.

A man with a huge grudge against Francis and various others in the heirarchy accuses the one guy who actually got rid of McCarrick of being The Villain and the Usual Suspects instantly start screaming “RESIGN!”

Me: I’m having trouble wrapping my mind around the concept that the guy who, by his own confession, knew McCarrick was an abuser and did not call the cops, but did celebrate a dinner honoring him as a Great Evangelist is now accusing the one guy who did get rid of McCarrick as the villain and everybody is treating the guy who protected McCarrick as the hero. 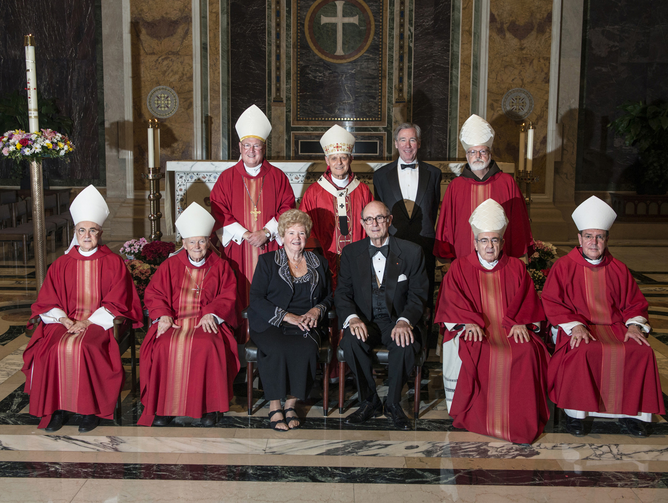 Archbishop Viganò seated next to then-Cardinal McCarrick, front row on left, along with other U.S. cardinals, Glory and Thomas Sullivan and John Garvey, at a fundraiser on May 10, 2013. (CNS photo/Edmund Pfueller, Catholic University of America)

That picture was taken in 2013, seven years after Viganò says he knew, but more than five years before he bothered to tell us.

“Well, what could he have done? He claims he only knew of adults harrassed and assaulted by McCarrick, not minors.”

He could have called the cops. Sexual assault and harrassment of adults is a crime too.

And those crimes could have been made public in 2006, according to Vigano. But instead, he did nothing to alert the public to this dangerous predator, by his own confession, but did enjoy hanging out with him at public soirees. Why is he a hero again? And why is his undocumented word sufficient basis to shriek that Francis–the only one who acted–MUST RESIGN!

Meanwhile, we learn that this claim–which is central to the Register’s story of Benedict’s alleged Double Secret Probation allegedly placed on McCarrick:

The Register has independently confirmed that the allegations against McCarrick were certainly known to Benedict, and the Pope Emeritus remembers instructing Cardinal Bertone to impose measures but cannot recall their exact nature.

Archbishop Georg Gänswein, private secretary of Benedict XVI, has rejected the claim that the emeritus Pope has confirmed the allegations of former Vatican diplomat Carlo Viganò. “Pope Benedict has not commented on the ‘memorandum’ of Archbishop Viganò and will not do so,” Gänswein told the newspaper. The claim that the emeritus Pope had confirmed the statements lacked any foundation. “Fake news!” Says Gänswein

And the Register offers the absolute incoherent response that Gänswein is correct to call the claim “fake news” and that they stand by their story.

Beyond this, we have the word of various bishops and Catholic talking heads, pro and con, about the reliability of Vigano.  Those opinions line up, as a general rule, pretty closely with those who hate, dislike, or are discomfited by Francis and those who are neutral, like, or love the man.  So that’s not too useful as a metric.

That said, there is an important distinction and one which Francis’ behavior helps to support.

The reality is not there is a split between those who insist Francis is guilty of protecting an abuser and those who insist he is innocent.  Rather, it is between those who insist this dubiously sourced bomb, promoted by people who have hated Francis for five years is PROOF and who immediately shout RESIGN! without investigation and those of us who still think that somebody is innocent till proven guilty and who want what Francis wants: a full investigation by media and blogs and right wing gossip centers that are not visible from space enemies of Francis.

“The New York Times reported Aug. 28 that one of the people Viganò consulted with while writing his statement was U.S. lawyer Timothy Busch, who is on the board of governors of EWTN, which owns the [National Catholic] Register.”

In other words, the guy who wrote the allegations consulted with and was helped by a rich guy on the board of EWTN, which not only employes Edward Pentin–whose claims were just exploded as “fake news” by the man closest to Benedict, but which also has hosted Eternal FOX News auditioner Raymond Arroyo and his doggedly Francis-bashing “Papal Posse”. This was very carefully planned, but not very carefully documented.

Meanwhile, Francis’ response is “Hey press!  Go to it!  Dig up the facts and you tell me if I’m guilty of what Vigano claims.”

That’s my position too.  Show me the evidence that Francis is as guilty as Vigano of protecting an abuser and I will join the chorus calling for his resignation.  But at present there’s no There there.

Meanwhile, what most impresses me is this:

The primary achievement of the attempted coup against Francis so far is that victims have been entirely forgotten and the Usual Suspects in the conservative Catholic propaganda machine have focused on what really interests them: destroying their culture war enemies (Francis above all) and grasping at power.

The interest in facts seems to be entirely secondary.  Here, for instance, is Thomas Peters treating facts as unimportant if he can just land some ideological punches while my friend Lizzie Scalia,  (whose heart has been well and truly broken by all this) over on Twitter is calling for us to stick to facts and find out what happened.

That’s the real division: between those of us who want the truth to come out, come what may (including, if necessary, the resignation of Francis) for the sake of the victims, and those who just want to hurt their culture war enemies by any means necessary–for the sake of power.

Everything about this stinks with the ugly stench of the Greatest Catholics of All Time using classic Right Wing Media Panic Du Jour tactics to stampede the harried (and only dimly informed), to clutch at power, and to claw their way over the dead and wounded bodies of people they could not care less about to achieve their goals.

All we actually know is that the guy (and the Right Wing Media Machine at the Register, Liesite, and other organs of Francis-hatred) offering undocumented allegations (some of which are now *directly* contradicted by Benedict’s secretary) confesses he knew McCarrick was a predator and did not call the cops. Indeed, he feted McCarrick and honored him at dinners. Meanwhile, the conservative Catholic Noise Machine that has hated Francis from the moment he was elected carefully timed the erroneously fact-checked bomb to hurt the guy they have hated and have somehow convinced the Greatest Catholics of All Time that the protector who did nothing is a hero and the Fount of All Truth. And for their crowning audacity, they declare the guy who actually got rid of McCarrick to be guilty and demand his resignation. And multiple, well-financed right wing outlet has long, pre-prepared documents saying “Game Over!” within a ridiculously short time after this well-coordinated attack was launched.

I say what I’ve said all along: Evidence. Fact. Documentation. Let’s have it. All we have at present is a bunch of allegations amplified by conservative Catholic media and accompanied by screams of “RESIGN!” from people whose judgment I would not trust for a million dollars.

Evidence. Fact. Documentation. Let’s have it.

And above all, let’s get the focus back where it belongs: on healing the victims and punishing the perps.

August 28, 2018
My series on Catholic Social Teaching
Next Post

August 29, 2018 Today's New Facts I Learned About the Palace Coup
Recent Comments
0 | Leave a Comment
Browse Our Archives
get the latest from
Catholic
Sign up for our newsletter
POPULAR AT PATHEOS Catholic
1

From Founding a Startup to Deloitte...
Through Catholic Lenses
Related posts from Catholic and Enjoying It!