My series on Catholic Social Teaching

Back in 2016, I wrote a series of pieces on Catholic Social Teaching for the National Catholic Register.  Recently, one of my readers suggested I should make that series available again since there is growing interest in that Best Kept Secret of Catholic teaching.

The Dignity of the Human Person,

My general disclaimer to American readers is this: If you are on the Right, you will generally like the Dignity of the Human Person stuff and a (radically whittled down and distorted version of Subsidiarity acceptable to Libertarians).  If you are on the Left, you will like the Common Good and Solidarity stuff.  Rare indeed are Americans who like the whole thing.

For that reason, whatever offends you most is what you should try the hardest to understand since, if you only listen the Church when she tells you what you want to hear, it is not the Faith you believe, but yourself.

Lemme know what you think, 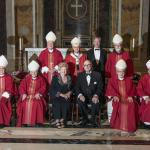 August 28, 2018 Today's Palace Coup News
Recent Comments
0 | Leave a Comment
Browse Our Archives
get the latest from
Catholic
Sign up for our newsletter
POPULAR AT PATHEOS Catholic
1

Catholic
Masquerading as a Social Justice Warrior
Catholic and Enjoying It!

Catholic
The last installment of my series on Catholic...
Catholic and Enjoying It!
TRENDING AT PATHEOS Catholic