…on the dogged dishonesty of the Francis Haters:

“Instead of acknowledging the huge hole Ouellet’s letter punches on Viganò’s testimony (a death blow in my opinion), anti-Francis critics have, unsurprisingly, doubled down. All across the Catholic social media, the immediate reaction to Ouellet’s intervention was a kneejerk one. “Ouellet is lying.” – they say, supposedly out of fear of reprisals from his superior. After all, the idea of Francis as a “Dictator Pope” is part of the narrative those critics constantly peddle. Of course, Ouellet’s tone is not one of a fearful person who is trying to lay low in fear of his superior… on the contrary, it’s the tone of a person who is in possession of the facts and forcefully presents them as such, showing even a hint of understandable frustration for seeing such a stubborn insistence on statements which are contradicted by those facts.

And here is where the Orwellian redefinition of the word “sanctions” pays off. The argument now is that Ouellet’s clear and unmistakable refutation… does not provide “substantial refutation.” This is indeed Orwellian… if Ouellet’s letter is not a refutation, then nothing in the entire world is a refutation of anything.

Why is Ouellet’s letter not a substantial refutation? Because Ouellet has proven that there were restrictions in place, not “sanctions.” And that’s what Viganò has claimed all along – so I read in social media. Viganò never claimed there were “canonical sanctions” in place, only “restrictions” – so I see people unashamedly proclaim. Of course, we can go back to Viganò’s testimony (just scroll up to the beginning of this article) and see that that is blatantly false. But this does not deter people from claiming such absurdity.”

Sooner or later, my guess is that they will find some place in his history where, like Peter, he has really and truly sinned.  When they do, this mob will eat him alive without mercy.  Because they have not the slight interest in the gospel.  What they crave is power.  Period.

Still and all, the Holy Spirit guides the Church and is her soul.  And I think Francis, for all his human faults, trusts in that in a way that the worldly hungerers after power do not believe and could not care less about.

October 15, 2018
Francis-Hatred and the Drip, Drip, Drip of Girardian Scapegoating
Next Post 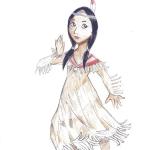 Catholic
The Weird Fundamentalist Catholic/Evangelical Alliance
Catholic and Enjoying It!

Catholic
Ross Douthat recently mentioned Where Peter Is...
Catholic and Enjoying It!

Catholic
Jimmy Akin on the absurd charge of heresy...
Catholic and Enjoying It!
TRENDING AT PATHEOS Catholic