Yes. The Holy Family were Refugees

Before Trump’s election, Republican Court Prophets like John Zmirak helped to stampede conservative Catholics with the fraud that Trump was Constantine and Clinton was Diocletian.  Vote for Trump or face persecution!

My point then, as now, is that Jesus told his disciples to fear seduction, not persecution.  No.  Really:

Do not fear those who kill the body but cannot kill the soul; rather fear him who can destroy both soul and body in hell. (Matthew 10:28)

The one who can destroy both body and soul in hell is you, when you give yourself to the worship of idols in your pursuit of money, pleasure, power, and honor as a visible from space antichrist leads you to the top of an exceeding high mountain and promises you all the kingdoms of the earth if you will bow down and worship him.

But American Christiansts, an antichrist cult who fear the first death and who give no hint of so much as believing in the second death (judging from their sadistic cruelty to the least these, their avarice, their lies, and their nihilistic cynicism) chose to ignore Jesus and sell themselves to Trump, telling themselves the lie that they would “hold his feet to the fire”.  Instead, they have lived, not 779 days since November 8, 2016, but November 8, 2016 779 times, lying that everything Trump has said and done since then is justified because “otherwise Hillary would be President.”

Dudes.  She lost.  Get over it.  Live in the present.  You are lying now.  Today.  Constantly.  You’ve done it every day since Trump took office in order to rationalize your vote.

This is the essence of the contrast between Christian discipleship and Christianism.

A Christian disciple seeks first the kingdom of God and his righteousness and conforms himself to Christ.  He dies to himself so that Christ will live in him.

A Christianist kills Christ in order to cannibalize Christian culture for whatever will accessorize his worship of his true god, Donald Trump.

Today’s lie is that Jesus and the Holy Family were not refugees.

Why are we hearing this?  Because, of course, recognizing that the Son of God identifies himself with the refugee, the alien, the orphan, and the widow, with the caged child, with the desperate poor, with those fleeing political violence in their homeland is not something that makes a brutal antichrist cynic who hides behind the unborn to cheer for the Orange Herod look good.  It reminds the world that the Greatest Christians of All Time don’t really even care about abortion.  They care passionately about enjoying the sadistic cruelty being meted out to desperate refugees at the border.  They care, not to put too fine a point on it, about being the Diocletianic persecutors of Christians they said they feared.  Because with the Cult accusation is always a form of confession.  Christianist are enemies of the gospel they claim to uphold.  So they don’t read scripture in order to learn from it.  Indeed, they don’t read it at all.  They instead decree what it will and shall mean, and then press Scripture into saying just that, no matter how much violence must be inflicted on the text to arrive at the desired destination.

So as the Cult metes out suffering, torment, and cruelty to refugees, some members of the Cult turn to Ben Shapiro to help them deny the Holy Family were refugees with the declaration that “Joseph went with Mary to Bethlehem to register for the census. They weren’t refugees.”

Shapiro is straining at gnats and swallowing camels here.  He is responding to Catholic Alexandria Ocasio-Cortez’ remark:

Joy to the World!

Merry Christmas everyone – here’s to a holiday filled with happiness, family, and love for all people. �(Including refugee babies in mangers + their parents.)

Now Shapiro has the excuse of being Jewish and not raised in the Christian tradition. But what excuse do conservative Christians have for passing along his “rebuttal” triumphantly? Obviously AOC is right here to see in the Holy Family, denied any welcome and giving birth to Jesus in a stable, as icons of the unwelcome refugees at our border.

If you don’t believe me, just listen to liberal heretic Pope Pius XII:

“The émigré Holy Family of Nazareth, fleeing into Egypt, is the archetype of every refugee family.”
– Pope Pius XII, 1952, in Exsul Familia Nazarethena

Ah, but the ingenious conservative Christian is ready with his pettifogging and minor legalisms to declare nonetheless that Jesus was not a refugee. He achieves this effect by the ridiculous method of saying that since Judea and Egypt were both under Roman rule, it was therefore like moving from Maryland to Virginia for the Holy Family to flee Herod’s death squads.

But more than that, he does so by means of one of the fundamental differences between the way the Church reads the life of Jesus and the way many Protestants do. The Church reads the incarnation of Jesus as meaning that the actual flesh and blood events of his life are the revelation. It is the person of Jesus who matters and through him we understand the significance of the actual flesh and blood neighbor who shares the human nature of the Son of God.

For many Protestants (and Protestantized Catholics) exactly the opposite holds true: The actual life, death, and resurrection of Jesus are all prologue to the real event: abstract theology and its bastard child, ideology. In that world, what matters is not the living person of Jesus, but concepts: justification by faith, sola scriptura, the inerrancy of Scripture, predestination, property rights, gun rights, racial purity, etc. Note how this person’s mind works:

God sent Jesus to Egypt so that He could bring the Messiah out Egypt as a public declaration that Jesus was the long awaited Son of God and Messiah for the new covenant.

In Far as the Curse is found, Williams writes, “baby Jesus’ flight into Egypt and return recapitulates the Moses typology, establishing Jesus as the new Moses, the new law giver, before he ever preached the covenant law”, seen in the Sermon on the Mount.

The New American Commentary states that Mathew quoted Hosea 11:1 to prove that typically and primarily God called Israel from Egypt and antitypically and fully that God called the Messiah from Egypt, making it necessary that Jesus had to be called to Egypt.

Jesus was not forced to go to Egypt because of Herod. Jesus was called to Egypt by God. To call the family of Jesus refugees borders on the profane and lacks understanding of God’s redemptive plan to save his people.

Now, as the author of Making Senses Out of Scripture, I’m the last to deny that biblical types and antitypes matter.  And it is true that Jesus recapitulates Israel’s sojourn in Egypt.  But the life of Jesus did not happen *so that* a checklist of theological abstractions could be checked off. Prophecy was made for Jesus, not Jesus for prophecy. Jesus lived a fully human life and chose to completely identify himself with the least of these, including the refugee.

So the Christian reads the biblical text and listens to what it says:

Why did they flee?  Because Herod sought to kill them.  They were refugees just as surely as the people at our border fleeing death in their homelands are.  And we have a duty to welcome them because they are made in the image of God–and because their homelands are murderous messes because we bear huge responsibility for making them so.

A Christianist, in contrast, shrinks from the implications of the Incarnation like all his gnostic ancestors and recoils at the thought that God really and truly comes all the way down into the human condition.

God taking on flesh was condescending enough. The second person of the Trinity took on human flesh. He did so without being stripped of his divinity or his divine attributes (John 1:1-14). In Philippians 2:5-11 Paul writes some of the most profound realities of Jesus. Jesus did not consider equality with God as something to be used solely for His own advantage. Likewise, we should not use the reality of the humanity of Christ, Jesus in the flesh, to compare him to modern day refugees or illegal immigrants for political advantage today.

“Condescending enough” says it all.  Surely it’s enough that Jesus was a good white middle class Protestant human like me.  It is far too much to acknowledge that he is one of those vile poor brown humans.  Why, if that were so, I would have to acknowledge his presence there, at the border too. The Son of God became middle class and white that middle class whites might become sons of God.

Note how the seduction seeps backward from the Christianist’s need to rationalize his support for Trump and perverts his Christian faith until it specifically denies the words of Scripture itself.  The Holy Family were refugees fleeing death, just like Jose y Maria y Jesus at our border today.  All the Christianist lies in the world cannot change that. 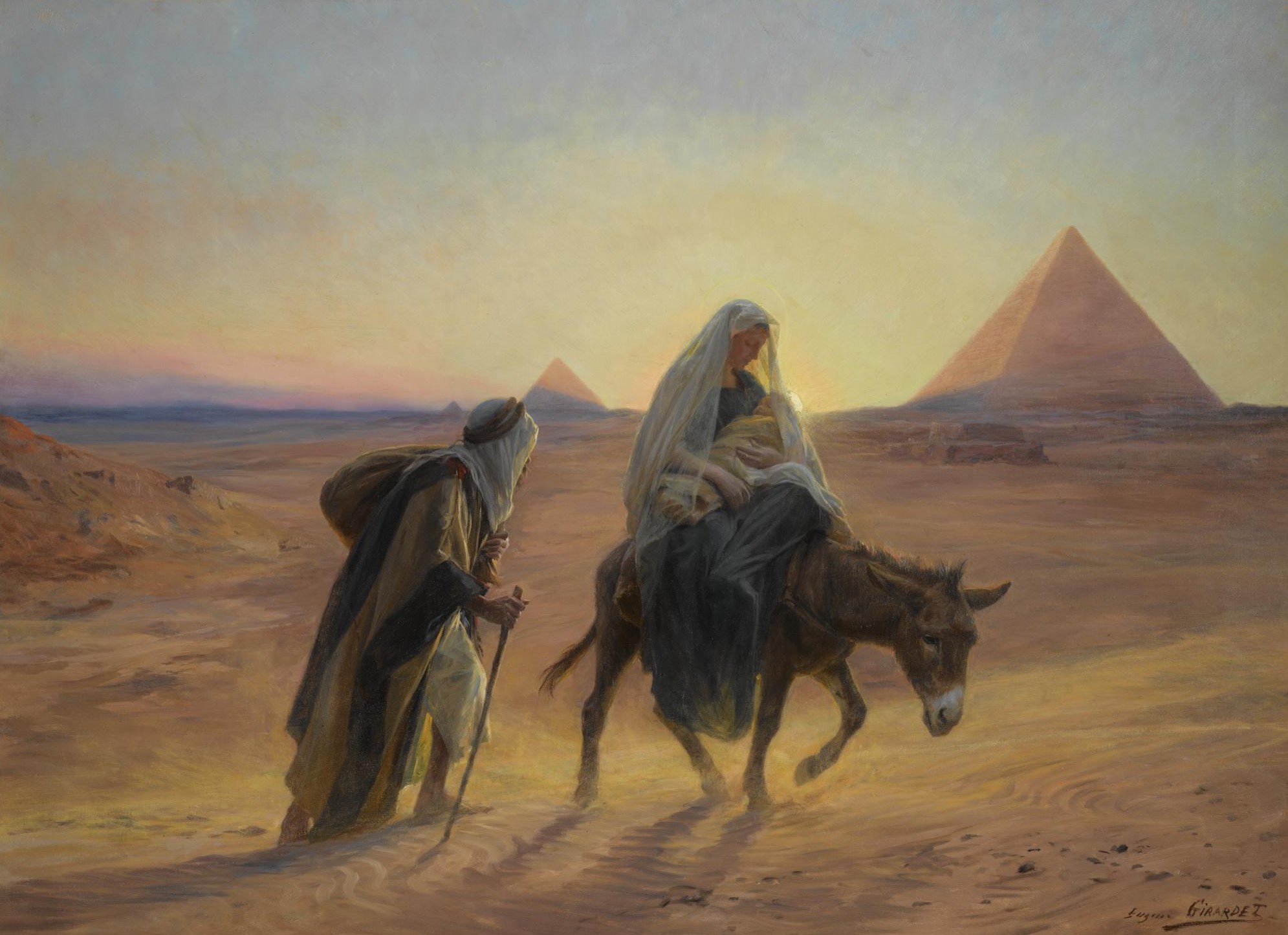 December 29, 2018 Responding to Common Skeptical Commentary about the Infancy Narratives
Recent Comments
0 | Leave a Comment
Browse Our Archives
Related posts from Catholic and Enjoying It!