The Woman Taken in Adultery and the Judgment of God

The Woman Taken in Adultery and the Judgment of God April 9, 2019 Mark Shea

Here’s a little piece I wrote a while back for Saint Anthony Messenger. Given that this was the Sunday reading, I thought it appropriate to reprint it here.

The story of the woman taken in adultery stands out in Scripture for a number of reasons.

First and foremost, it stands out because it is reckoned as Scripture at all.  The story doesn’t have a fixed home in the gospels.  There is a lot of back and forth in the manuscripts of the New Testament about whether and where to include the story but, in the end, the Church simply could not bear to let it go.  So the story settles down to its place in John 7:53-8:11.  The Church seems to have never quite made up its mind about who the human author was (rather as it never made up its mind about who wrote Hebrews).  But the Church was quite fixed in its conviction that the Holy Spirit is the Divine Author and that it preserves a real memory of something Jesus did and said.

I can’t say for certain that John wrote the story, but I can say for certain that, if he did not, whoever did so has definitely got John’s talent for economy of words and his ability to cram a ton of meaning into just a few terse sentences.  More than that, what interests me here is what John shows us about the judgment of God and its unexpected paradoxes—and what that tells us about the Judgment we may expect on the Last Day.

We know the story well—and for that reason we may well be blind to it.  Jesus’ enemies bring to him a woman taken in adultery: “in the act”.  There is, in short, no question about her guilt.  She was taken in flagrante delicto. Nor do the ones bringing her to Jesus have the slightest question of what is to be done with her according to the law of Moses.

But here is where things become interesting and, by turns, horrifying, astonishing, and beautiful.

The men bringing this woman to Jesus have not the slightest interest in her.  Indeed, in a certain sense, they are not even interested in her guilty—only in her utility in entrapping him.  Notably, they have not brought the man with whom she was committing adultery.  It is not clear if she has been cheating on her husband or he on his wife.  But the law to which the mob are appealing is clear: “If a man commits adultery with the wife of his neighbor, both the adulterer and the adulteress shall be put to death” (Leviticus 20:10).  That they have not bothered to bring the man makes clear that this kangaroo court is not really interested in pressing the demands of the Mosaic law, but in finding some pretext to condemn Jesus.  The woman was weak and easy to grab (and quite possibly not as fleet-footed as her paramour, or simply not as rich or well-connected in the good ol’ boys club that now hefts stones and awaits their chance for a kill).  At any rate, they have nabbed her and let her lover go.  And now they are here, not to see justice done but to put this up-country messiah in a bind from which he cannot escape.

The bind is this: if Jesus affirms the law of Moses and its command for death, then he usurps Roman authority which alone can inflict the death penalty in occupied Judea.  He becomes the leader of a lynch mob and can be handed over to the Roman authorities as a rebel.

On the other hand, if he does not affirm the law of Moses, then he is no Messiah since he rebels against the word of God.

It’s a pretty puzzle, and it looks like they have him dead to rights either way.

So what does Jesus do?  He kneels and writes in the dirt with his finger.  It’s a curious detail and it’s worth noting.

The evangelists are not like modern novelists.  They are not interested in verisimilitude.  So they do not, for instance, ever give us description of Jesus’ appearance.  When they do include details, it is usually because something about the scene has a theological meaning.  So, for instance, Luke carefully mentions Jesus being placed in a manger because he wants us to see the Eucharistic significance of Jesus’ birth.  A manger is a feed box and the Bread of Life has just been born in Bethlehem, the House of Bread.

Why then does the sacred author mention Jesus writing on the ground with his finger?  Because God has done that before: he “gave to Moses, when he had made an end of speaking with him upon Mount Sinai, the two tables of the covenant, tables of stone, written with the finger of God” (Exodus 31:18).  The finger of God wrote “You shall not commit adultery”.  Now God is writing with his finger again as he is asked to render judgment against an adulteress condemned by that very law.

Now, when we think of God judging we typically imagine him looking down on us and pronouncing our doom as we look up at him in supplication, pleading for mercy and dreading damnation.

But this passage, in fact, shows us what the judgment of God looks like.  God incarnate kneels before the woman taken in adultery.  He places himself in a position where he must look up into her face.  Then, he stands up, having written with the finger of God, and pronounces his first verdict, directed not to the woman, but to those eager to kill her, the image of God: “Let him who is without sin among you be the first to throw a stone at her” (John 8:7).  They back away and drop their stones, the eldest first, and finally the youngest.

So much for the clever trap.  But judgment of the woman still awaits.

Jesus, for his part, kneels again, forcing himself to again look up into the woman’s face.  If you are looking for a foreshadow of what Judgment Day will be like: this is virtually the only one we have in the New Testament where Jesus actually gives us, not a parable or an image, but himself actually rendering judgment against a sinner.

He addresses her as “Woman” (gynai in Greek).  This sounds cold to the English-speaking ear but we have to hear it in the context of both the Old Testament and in the context of Jesus own habits of speech which are so formed by the Old Testament.  It is, in fact, an allusion to the Woman, Eve.  It is also an allusion to Jesus’ habitual term of address to the Woman of the New Testament: Mary the New Eve.  In short, it not brusque, reductive, or dismissive but is something freighted with connotation that will, in later languages, amount to “My Lady”.  He is, in fact, exalting her.  That is what the gesture of kneeling means.

And Jesus?  He appears to see nothing but the human being in front of him: the Imago Dei.  His answer to the mob is prelude to the main goal: the liberation and healing of the woman.  He sees her as he sees us: as beloved people, not as tools in a power struggle. The law he wrote with his finger was made for her, not she for the law. He is nothing but for her, as he is for you.  His judgment is his mercy. 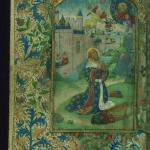 If Any Drug Tested on HEK-293...
Through Catholic Lenses
Related posts from Catholic and Enjoying It!

Catholic
Prudence and Climate Change
Catholic and Enjoying It!

Catholic
The Mary and Martha Balance
Catholic and Enjoying It!