A smart take on the polarization of the American Catholic Church

A smart take on the polarization of the American Catholic Church May 20, 2019 Mark Shea

With the rise of Donald Trump, however, populist nationalism—another ideology deeply at odds with Church teaching—has become increasingly important among both elites and the public.

One consequence has been the rise of what many are calling alt-Catholicism. Alt-Catholics in the U.S. set up their own alt-magisterium, one that permits them to reject Church teaching on a range of subjects. The term is fitting because many of these ideological positions align with positions held by the alt-right: antisemitism, anti-Muslim bigotry, hostility to refugees and other migrants, hostility to racial justice, sexism, support for far-right strongmen, democratic backsliding, isolationism, support for the death penalty, and sectarianism. Some seek to discredit Church teaching on economic and environmental justice, as well. To be clear, it is common for alt-Catholics to reject some alt-right positions, while embracing others, and to even openly condemn the alt-right so they will not be associated with white supremacists.

The U.S. has become the epicenter of anti-Pope Francis right-wing dissent. Some of this comes from mainstream Republicans who are opposed to Francis’ social justice agenda. Some of it mirrors the anti-immigrant and anti-Muslim populism that is surging around the West. Some of it comes not from polarization, but partisanship, and a greater commitment to Donald Trump than to the pope. Finally, some opposition comes from opponents of Vatican II, who reject much of the last 125 years of Church teaching, including its affirmation of universal human rights and commitment to genuine participation in government, instead favoring integralism, monarchism, anti-democratic paleoconservatism, or another traditionalist ideology.

These alt-Catholic individuals who claim to be orthodox and more Catholic than the pope, despite publicly dissenting from clear Church teaching, have used social media (including troll armies filled with anonymous accounts) and the Catholic press to magnify their favorite narratives and conspiracy theories, despite the small number of U.S. Catholics (and miniscule number of global Catholics) who embrace this approach. Even the mainstream Catholic media, prone to an “all sides matter” mentality and blinded by the distorted reality of the Catholic social media bubble, has confused social media popularity with real world support and magnified their influence.

So as the Church faces the problem of overcoming the big divide in American Catholicism between conservatives and liberals, it must now also contend with a small group of militant, pope-hating far right dissenters that distort and damage the U.S. Church on a daily basis.

All of this comes at a crisis point for the American Church with the fourth wave of the sexual abuse crisis, damaging the Church’s credibility in the eyes of many. Further, attempts have been made to hijack the crisis by ideologues who are seeking to advance a separate ideological agenda. The anti-pope faction, which includes alt-Catholics and opponents of economic justice, has threatened civil war and schism, while attempting to engineer a coup. This has only intensified polarization, and unless changes are made, we are likely to see polarization increase further.

May 18, 2019
Saturday is a Good Day to Learn Some Dinosaur Science
Next Post 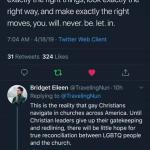 May 21, 2019 On gays in the Church
Recent Comments
0 | Leave a Comment
Browse Our Archives
get the latest from
Catholic
Sign up for our newsletter
POPULAR AT PATHEOS Catholic
1

Catholic
More on Gnosticism and the Myth of the...
Catholic and Enjoying It!

Catholic
Disproving the Lie that Trump Did Not Call...
Catholic and Enjoying It!

Catholic
Deacon Steve Greydanus on the Faustian Bargain of...
Catholic and Enjoying It!