On gays in the Church

One of the things I most regret as a Catholic writer is the aid and comfort I have given in the past to treating gay people first as a problem and only second, if at all, as a human being.

A gay Christian, even if he or she is faithful and obedient to the gospel in every way is consistently treated by the overwhelming majority of “faithful Catholics” (at least on-line) as a fifth columnist and constantly told they are judged by their appetites, not by their obedience. Here, for instance, is a typical specimen of how the Righteous treated Eve Tushnet, a faithful Catholic, for the sin of trying to treat gay people as human beings.  The torrent of insults directed at Fr. James Martin seems to me of a piece with this.  He himself says he agrees with the Church’s teaching on sexuality.  But since he thinks that gay people are also encompassed by Christ’s redeeming mission and thinks they should be treated with respect, he is the butt of endless assaults, not only on his fidelity but also on his supposed sexual identity. The result has been the creation of a Church culture where, so far from evangelizing gay people, we do all in our power to drive them from the love of God in Christ, and then gloat over their damnation when they flee our brickbats.

Case in point: All three of these men are chaste and celibate Catholics. Yet, for some reason, they get the loud an clear message from the Righteous that they are unclean and unwelcome. This is a grave sin. Millstone grave. 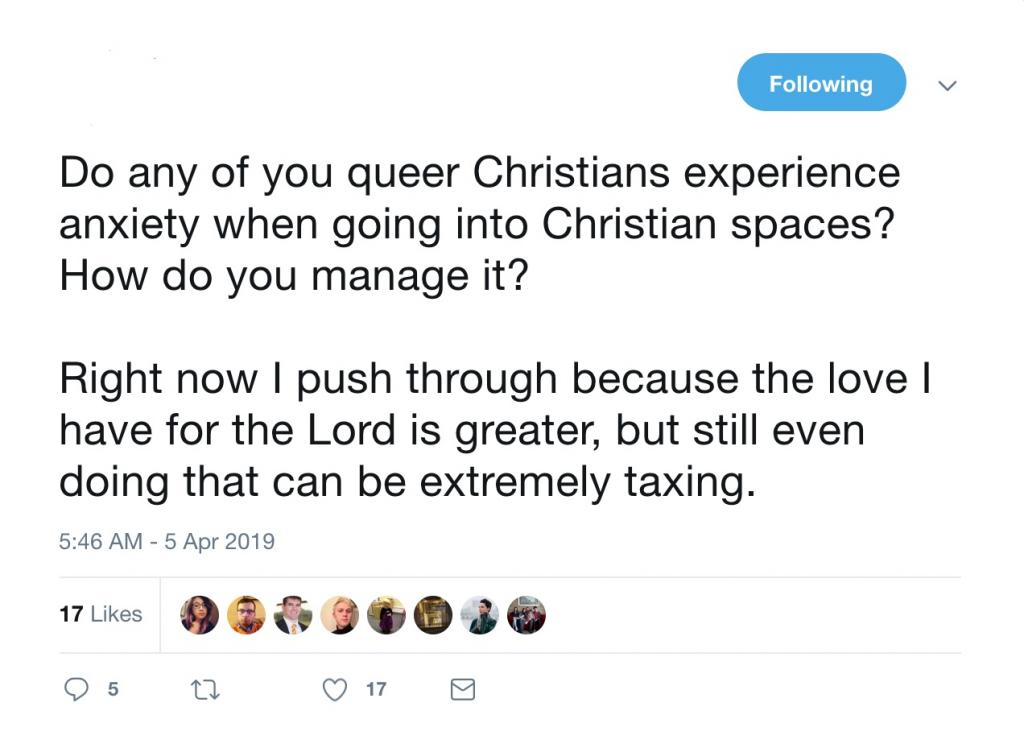 Given this awful behavior by the Defenders of the True Faith, one of the greatest testimonies to me of the power of the Holy Spirit is that any gay Christian remains as a disciple of Jesus Christ in the midst of the torrent of abuse and rejection they receive from Real Catholics. They are not even allowed to use ordinary English to describe themselves as gay, because 50 Super-Catholics will immediately attack them as subversives for using ordinary English and shriek at them to use the sacred shibboleth “same-sex attracted” or be rejected by the Righteous as evil imposters and enemies of the Faith. The Righteous tie up heavy burdens for their backs and do not lift a finger to help. They babble about the dignity of the human person, but see every gay person first, not as a human person, but as a problem who needs to be fixed and hagridden with demands to prove and re-prove and re-re-prove their purity every single second of every single day.

After some soul-search about my own insulting behavior toward and expectations of gay people, in light of the Church’s teaching about the dignity of the human person, I realized my fundamental sin toward them was simply that I was starting, not with “human person” but with “gay”.  I realized that they should be treated as what they are: human persons with human dignity first and sinners (as the rest of us are sinners) second. But instead, their particular issues are prioritized ahead of their human dignity. Indeed, so prioritized are their issues that even when they do not sin, they are treated as though they had simply because of their particular appetites.  I myself have disordered appetites, both sexual and gustatory, but very few people prioritize them over my dignity as a human person (except the Reactionaries who are absolutely obsessed with hating fat people), because they happen to be disordered appetites acceptable to Good White Conservative Christians. But when the disordered appetite happens to be one they feel squeamish about–like homosexuality–then the dignity of the human person goes out the window and human beings are reduced to problems who need to be fixed or eliminated.

I have no attraction to men and so have never tried to give advice to those who are. I resent it when people who don’t experience my struggles hand out free advice from Olympus. But I do have experience with being rejected by the Righteous, when I am trying to be a disciple of Jesus and I have known several gay people who have been heroic in their love of him despite the awful treatment they have received from Pharisees. To them, I can only say, “Respect!”–and add a rueful apology for every time I have spoken of gays as though they are a problem first only human beings a distant second, if that.

So I have concluded that we Catholics who want to encourage gay people to be disciples need to start by treating them as human beings made in God’s image for whom Christ died and not as problems to be fixed or eliminated–and above all, not as enemies.

Here’s what I mean: not long ago, I ran across a guy asking “How did they even get into the Church?” as though gays in the Church were spies and infiltrators. It is, alas, not an uncommon sentiment in the wilds of St. Blog’s comboxes. It never occurred to that guy that gay Catholics were baptized there as babies and grew up in the Church. His head was too full of conspiracy theories featuring George Soros and nutty books asserting that gays were sent into the Church by Stalin decades ago to “infiltrate” our ranks.  It also never occurred to him that they were converts who believe that Jesus is the Son or God who died for their sins.  The treatment of gay people as enemies and not as people struggling to obey Jesus like the rest of us is the biggest stupidity committed by Catholics in their engagement with gay brothers and sisters.  And the attempt to “purge” the Church of gay people by force of law or some such notion points to an issue of fundamental failure of the work of grace in the life of the Church.

Of which more tomorrow…

May 20, 2019
A smart take on the polarization of the American Catholic Church
Next Post

May 22, 2019 A follow-up to yesterday's post: On Neo-Pelagianism
Recent Comments
0 | Leave a Comment
Browse Our Archives
Related posts from Catholic and Enjoying It!

Catholic
First Wave of Children of Gay Couples...
Catholic and Enjoying It!

Catholic
You may want to sit down for this...
Catholic and Enjoying It!
TRENDING AT PATHEOS Catholic