I think I need to repent and apologize

So a few weeks back, I discussed this rather striking moment in my prayer life where God very lovingly told me that I do not love my enemies.

I took that to confession and have been thinking a lot about it and trying to change.

I’m also working on a book on the Creed and proofing the manuscript. (Books are not written, they are are re-written.)  In the course of that, I ran across this thing I wrote a year or so ago, which I really do believe:

Both the Immaculate Conception and the Assumption are gracious gifts given her by God and both are gifts wherein she cooperated freely with the grace of God.  More than this, both are gifts given her as signs to us in our struggle and pilgrimage toward Heaven.  Mary’s preservation from all sin both original and actual was a help for her as she raised Jesus and endured the horrors of his Passion.  But it is also a sign to us of the truth of our relationship with God.

One of the things we struggle with is the belief that sinfulness is the deepest truth about who we are.  We are tempted to believe it of our enemies and often even more tempted to believe it of ourselves.  When we sin, we say of others and ourselves that “the mask is off”—as though the image and likeness of God is the fraudulent thing about us and sin is the most fundamental truth.  It’s like saying the hole is the truest part of the donut.

Mary shows us that our human nature is made by God to be wholly good and that sin, therefore, is not what constitutes our humanity but what destroys it.  Mary is not less human, but most deeply human because of her preservation from sin. She stands as a sign of hope for us that we too will be as deeply saved from sin as she has always been when we reach Heaven.

This is why the Church has also always preserved the Tradition of her Assumption into Heaven as the fitting and gracious reward for her lifelong fidelity to her Son.  Once again, this honor, given to her by God is not simply for her sake but for ours as well.  She shows us, as the icon of the Church and the model disciple, what awaits all who live their lives in fidelity to Jesus.

So here’s the thing:  In my opposition to the ugly and evil policies of the Trump Administration and its conservative Christian supporters, my approach has been strongly influenced–ironically–not by “liberalism” as my critics always assume, but by conservatism, and particularly my respect for my Dad and what he endured fighting Nazis in World War II.  So if you really want to get the hang of my response to our White Supremacist-in-Chief and his vile winks and nods to Nazis, think World War II and this: 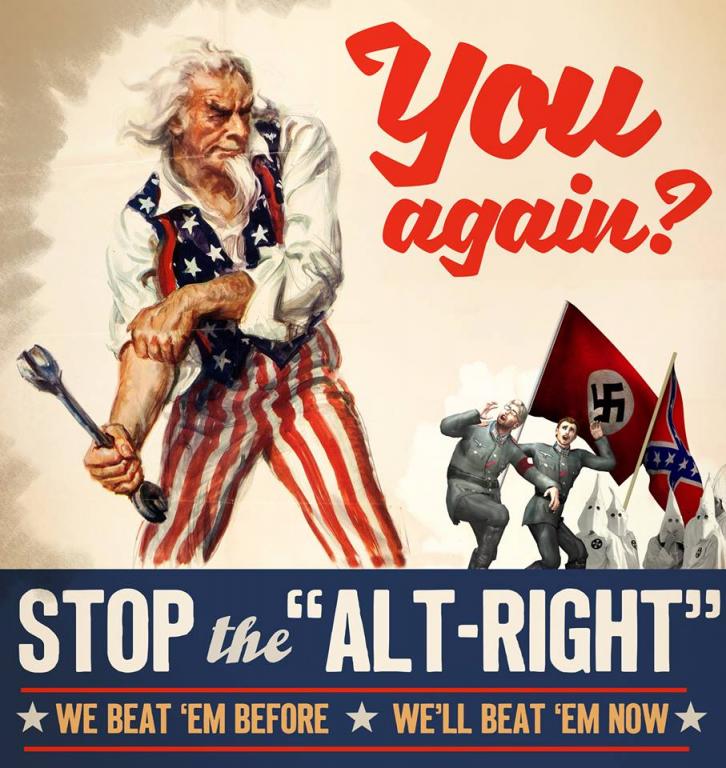 My attitude to the Trump Administration’s (and Right Wing Christian) embrace of the Alt-right Nazis and White Supremacists has been quite simple: crush them without mercy and if they get around to repenting at some point, be magnanimous then, but not a second before.

I still think this movement is deeply evil and I will always hate its ideology from my heart.  I still think it needs to be utterly crushed.  I still think the appalling prostitution of Christians who have defended Trump for his embrace of it is a shocking betrayal of the gospel.

I realized that what I have come to call my “World War II mindset” is also not rooted in the gospel but in a sort of American mythos of the Good War which has given far too much leeway to the idea that you can hate people and think the worst of them pre-emptively in order to destroy them.

Give that idea its head and you start thinking more and more of people precisely as bad people f0r whom the mask is goodness rather than creatures in God’s image. You approach them, not in charity, but with enmity, fear, and anger. I’ve been doing that to people a lot in my fury at the terrible distortion of the gospel that has gripped so much of American Christianity in its thralldom to Trumpism. I have, in short, regarded them as enemies, not as people for whom Christ died.

I have to stop doing that and I have to make public amends for having done it, so I’m doing that now.

But it does mean that I will try very hard to stop assuming the worst of people and seeing them simply as enemies and I will try to treat people with charity.

May 3, 2019
Jimmy Akin performs the autopsy on the charges of heresy against the Holy Father
Next Post

May 6, 2019 A Reader Objects to my Discussion of Prudential Judgment
Recent Comments
0 | Leave a Comment
Browse Our Archives
Related posts from Catholic and Enjoying It!

Catholic
My sincerest apologies to Stephen Herreid
Catholic and Enjoying It!

Catholic
Where Peter Is plays a little game...
Catholic and Enjoying It!

Catholic
Sorting Out the Covington Narratives
Catholic and Enjoying It!

Catholic
So I took a piece down and I...
Catholic and Enjoying It!
TRENDING AT PATHEOS Catholic