Amy Welborn found this cool thing about the rise and fall of Catholic Ladder, of which I have never heard, even though they were invented in my back yard as a teaching tool a century and half ago:

The next spring. from March 17-May 1, Blanchet held a mission event primarily for French Canadians, downriver from Fort Vancouver on the Columbia. He had expected few Native Americans to attend because he had not begun to actively evangelize them. Nonetheless, several contingents came from the Coast Salish tribes. Among them was an exhausted delegation of twelve from Puget Sound, who had traveled for five days by canoe and on foot.”

On the first day, Blanchet preached through translators about the “God of the Incarnation and the Redemption.” He recognised immediately that his efforts were ineffectual and that he had to revamp his preaching if he was to retain the attention of the large Native American presence. He knew that his problem was more than just traversing the region’s linguistic diversity.” Like Le Jenne two hundred years earlier. Blanchet saw that the natives did not understand the Christian need for salvation. But contrary to him, Blanchet saw the importance of presenting Christian beliefs matter-of-factly.

Using a white squared rule, a sharp knife, and a translator. Blanchet began anew the next day. In chronological order, he focused on the Christian essentials in plain language without complex theology. He explained creation, the fall of the angels. Adam and the promise of a savior, Christ’s life and crucifixion, and the mission of the apostles. He began at the bottom and progressed to top; he cut two series of

Blanchet’s audience watched and listened intently and respectfully. These people were visual learners and woodworkers familiar with specially designed staffs, planks. and totem poles.”‘ Furthermore, Tslalakum, the Swinomish chief of a Puget Sound delegation, requested clarity on some points and he requested that Blanchet add special signs to denote Noah’s ark and the deluge. the Ten Words or Commandments, and Blanchet’s arrival to instruct them. This exchange too, became part of the gestational process and then the sahalc stick was born.

The stick became an immediate success. It enabled neophytes to memorize summaries of the Bible’s principal events in a mere eight days, in spite of the language diversity among them. Blanchet appointed Tslalakum his first catechist and gave him a sahale stick with procedural instructions on teaching others. During the next two months Blanchet made and distributed copies to several new catechists. In turn, these catechists. from Oregon to British Columbia, made and distributed more copies. some of which were still cherished over 70 years later.

Meanwhile, Blanchet realized that the sahale stick did not lend itself to visual improvements, flexible use, and fast reproduction. Using locally available materials, he developed a chart or scroll for evangelizing groups. He brushed India ink onto durable yellow wrapping paper and he backed it with white linen affixed with paste. Blanchet’s first ladder reportedly measured 72 x 18 inches. He replaced the stick’s hash-marks and points with a vertical time line of bars and dots, and at the mid-point, he replaced the single cross for the crucifixion with a mound and three crosses. He also added several new but simple pictures on both sides of the time line. Most notable from bottom to top, were: six circles for the six days of creation, a boat for Noah’s ark, a tower for the Tower of Babel, an open book for the ten words or commandments of the Old Testament, a church building for the Catholic Church, another open book for the Gospel of the New Testament, and a withered branch for the Protestant reformation.

That summer Blanchet introduced the Catholic ladder to Native crowds, first on the Columbia River in July-August and then at Fort Nisqually on Puget Sound in August-September. During the daylight hours, he instructed outdoors by hanging it vertically from a tent pole or tree branch and pointing to specific symbols with a stick. Then. during the evenings, chiefs and head men continued to instruct by campfire. But while they attracted native crowds, satisfying native doubts on the need for redemption remained the greater challenge.

The 1840s were a decade of expansion for Catholic missions and Blanchet’s ladder. In Oregon Country and elsewhere, Blanchet’s ladder was in demand wherever missions were in their formative stage on the U.S. and Canadian frontiers. When Blanchet conducted his itinerant mission events, he found himself making several ladders at night by candlelight. Soon requests for copies became daily occurrences and entailed significant time commitments to honor and special copies were made up to ten feet in length for use by larger audiences.

In February, 1842. Blanchet initiated arrangements to publish his ladder through Archbishop Joseph Signay of Quebec. In November, he sent the finalized and corrected manuscript with an explanation for all symbols, which included new innovations such as the tree and serpent from the Garden of Eden suggested two years before by the Jesuit priest Pierre-Jean de Smet. Blanchet wrote that he needed large and small copies. In the following April. Signay sent word that he would be sending Blanchet 2,000 ladder copies by canoe and sea, and that others would be sent to the missions on the Red River, in present-day Minnesota and North Dakota, and to the missions in western Canada. Titled Echelle Chronologique et Historique de la Religion, it was published on coarse grained paper and measured approximately thirty-four by seven inches. It was also appeared within the 1843 annual report of the diocesan Society for the Propagation of the Faith.

Revisions of Blanchet’s ladder began immediately in Quebec City and the Willamette Valley. The next year, h is believed that Aubin, a Quebec diocesan priest, made the first revisions approved by Blanchet. He rearranged slightly the order of symbols and added a few new ones such as hell, heretics and schisms. At St. Paul’s Mission in the Willamette Valley, the newly arrived Sisters of Notre Dame de Namur.’” continued to produce specialty manuscript copies. such as a pocket-sized version with a wooden spindle at one end and a protective cowhide sheath on the other, and a Sister Aloysia created intricately hand-drawn copies in color.

June 4, 2019
Infiltration is, thankfully, taking a huge beating in the reviews
Next Post 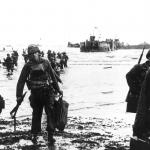 June 6, 2019 One of the remarkable things about prayer
Recent Comments
0 | Leave a Comment
"Its immoral to God/Jesus to engage in that behavior."
D.M.S. The Massive Failure of the “Prolife” ..."
"Make up your mind -- do you want them to get assistance, or not? Are ..."
Raging Bee The Bilko Party
"Children (especially young men) reared in single-parent homes are much more criminal than those reared ..."
Raging Bee The Bilko Party
"You're acting like getting rid of benefits is going to get rid of single mothers. ..."
Eris, elder daughter of Nyx The Bilko Party
Browse Our Archives
Follow Us!

Not a Gumball God - A...
Faith on the Couch
Related posts from Catholic and Enjoying It!

Catholic
In Honor of Valentine's Day...
Catholic and Enjoying It!

Catholic
And here is some of the last part...
Catholic and Enjoying It!
TRENDING AT PATHEOS Catholic