Quick question: What is this?: 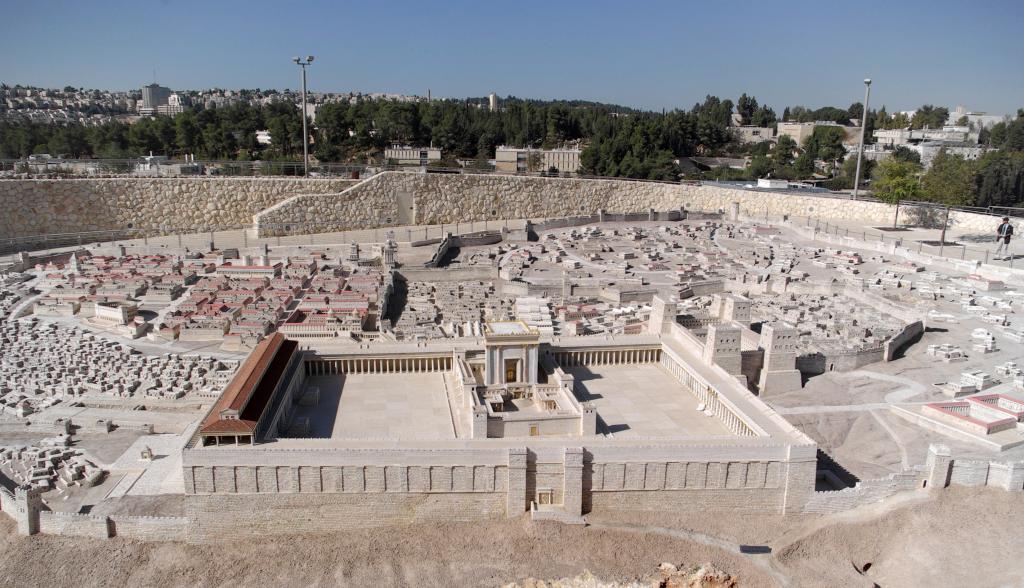 The answer depends far more on the way that you see than on what your eyes register.  Here are just some of the perfectly true answers to that question.

Images, in a word, are polyvalent and have layers of meaning and complex webs of connection with each other.  To say of virtually any image “This equals that and nothing else” is essentially impossible.  So much depends on context and on the way the image is both intended and perceived.  That does not mean “Images mean anything and everything and therefore nothing”.  But it does mean that we have to know context instead of assuming we know.  Take this image, for instance:

We all “know” what this symbolizes.  Because we all live in a period of time after a psychotic terror regime made it their symbol and now a bunch of white neckbeard wahoos are trying to revitalize it: 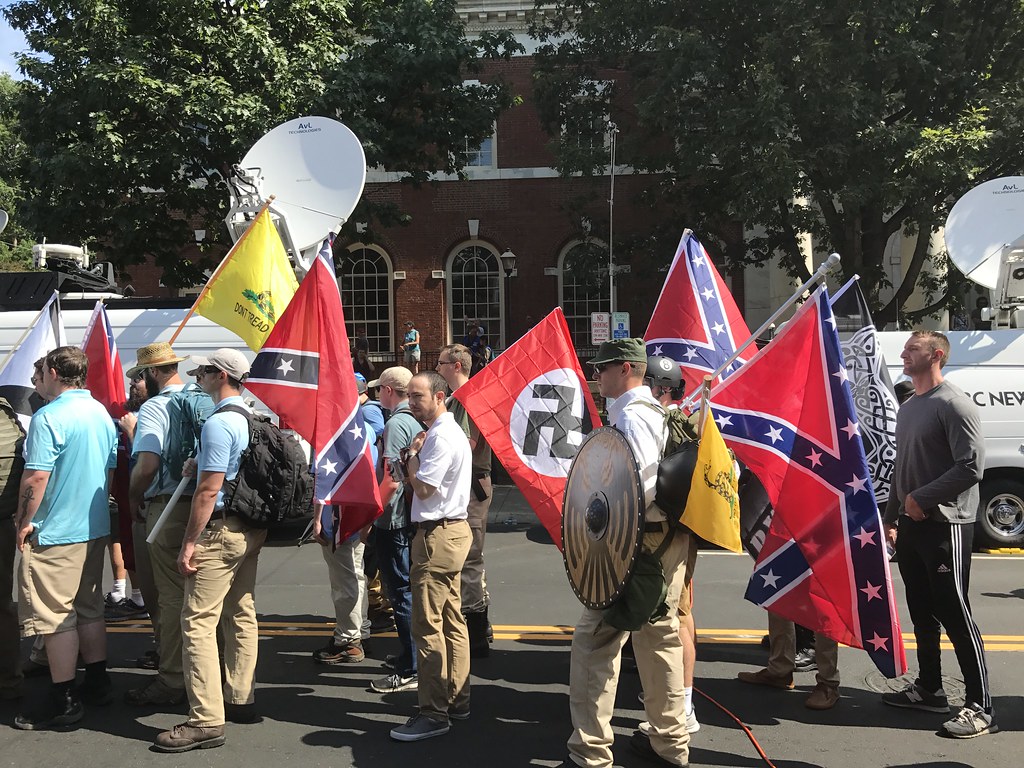 With no other context, we read the swastika as meaning “Nazi, racist, murderers, death camps” etc.  And in ordinary life, we are perfectly right to do so.  It is what it means 99% of the time.

Still we would be wrong to read Jains, Hindus, Buddhists, Iron Age Europeans, Native Americans, and pre-1920s Christians as Nazis for making free use of the swastika in their art.  It means Nazi since Hitler.  It meant good luck, blessing, eternal return, and the cross of Jesus Christ (depending on who you asked) before Hitler.  So the person who decrees that the late Bishop William Edington (d. 1366) is a Nazi because look!  swastika! is committing rash judgment:

So far, so good.  The problem comes when trying to navigate familiar images from cultures with which we are unfamiliar.  Then the old American folk proverb comes into play: “It ain’t what you don’t know that’s the trouble.  It’s what you know that ain’t so.”

What Christians began to do, following their Lord and Savior Jesus Christ, was to take images lying around in Jewish and pagan cultures and fill them with Christian content, referring to Jesus, Mary, the Church, saints, etc.  It was a natural thing to do since Jews repurposed things all the time.  They took the concept of a Temple from their pagan neighbors and repurposed it.  They took the idea of kingship from their pagan neighbors and repurposed that too, even going so far as to refer it to the coming Messiah.  They had a talent for taking the things their neighbors worshiped as gods and saying, “They are good, but not God.  So thank God for these good things, but don’t worship them.”  That is basically what Genesis 1 does.

Christians did the same thing, seeing the universe as sacramental and therefore stuffed with signs pointing to God.  And when they fanned out into the pagan world they just kept doing that: filling pagan forms with Christian content.  It’s where we got trees, holly and ivy at Christmas.  It’s where we got Easter eggs, and Green men decorating European churches, and Maypoles and a hundred other little customs and devotions.

And its where we got Spanish Missionaries using the Andean fertility deity pachamama as the basis for a Marian image:

“But but but the image presented to the Pope doesn’t look like that. Since when has Mary ever been shown naked or with her nipples exposed?”

The image is called the Lactation of St. Bernard and is a perfectly pious work of mystical theology showing the saint drinking the wisdom of Mary, who is the Seat of Wisdom in the Tradition.  Moral: Images that rash Puritans misinterpret as blasphemous may be perfectly pious.  Everything depends on how the community using the image sees it.

Remember what we just discussed? It ain’t what you don’t know. It what you know that ain’t so that’s the trouble. 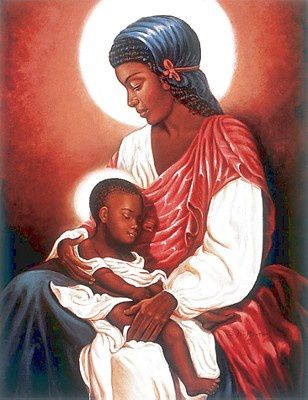 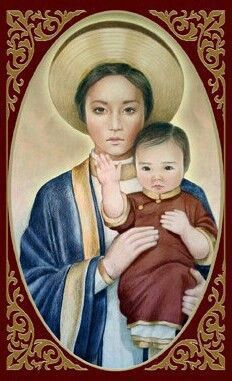 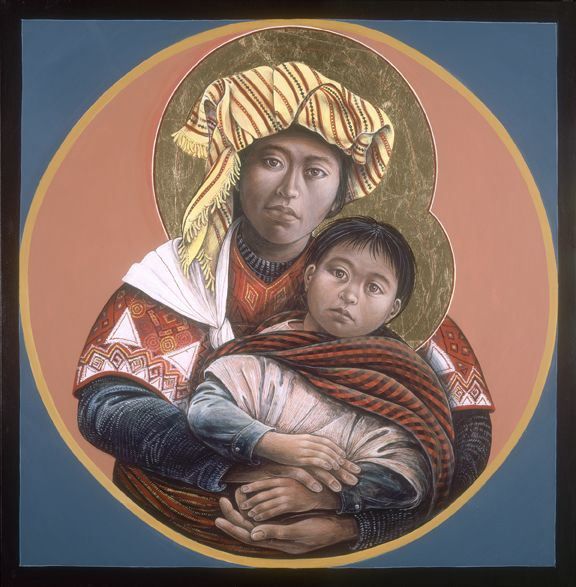 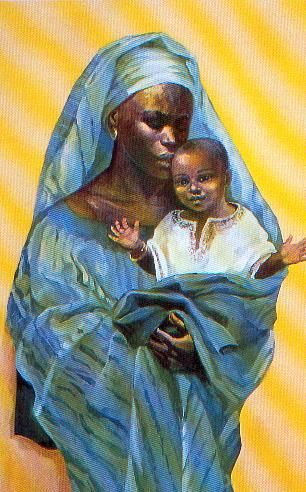 So what is the local dress in the Amazon?

The objection to the statue being “immodest” and therefore blasphemous essentially rests on western standards of modesty being imposed on Amazonian people.

But some of the people associated with the Synod said the statue represents life and fertility.  Yes, they did. And, as we shall discuss more tomorrow, one of them even denied that the statue had anything to do with Mary.  But guess what?  What the people who actually presented the statue to the Holy Father said was that the name of the statue was Our Lady of the Amazon.  And at the end of the day, they are the absolute and undisputed authority on what that image represents because they made it and they are the ones venerating it.  They are the ones assigning the meaning because it is their symbol.

Again.  What is this?

Virtually any Christian in the Western world will “know” what this is because our iconography is so ingrained that we instantly see a creche in this abstraction.  Show the same image in China or Yemen and they will draw a blank because their culture has not taught them how to see it.  We bring our preconceptions to images and project them on to them.  Often, as here, we don’t do badly to do that.

But the problem comes when arrogant vigilantes see an ambiguous image and, instead of asking what it means, refuse to listen to what the community behind the image says they mean and instead insist on telling them what they mean.

So, for instance, for years, as a Protestant, I was told, “Did you know that Catholics don’t worship Jesus at all? They actually worship a pagan goddess named Eostre!  That’s where ‘Easter’ came from.  Real Christians don’t say ‘Easter’.  We say Resurrection Day!  Catholics are clearly pagan!”

In the same way, I was also told that Catholics worship both statues and Mary.  How could you tell?  Well, just look at them!  They kneel and pray to statues and light candles and waft incense.  It sure looks like worship.  So it is worship.  And when Catholics tell you they do not worship Mary or statues, just reply, “Oh, but you do!”  (Curiously, none of the people who said such things believed they themselves were Moon worshippers for calling today “Monday”.)

This fundamentalist mode of thought is, incredibly, precisely the argument of the Catholic vigilantes who desecrated the statue.  Sure the people who gave it to the Holy Father say it is Our Lady of the Amazon:

I stand corrected. I’ve boosted the audio. This is what is said in Portuguese: “Our Lady of the Amazon.” Someone else says “Ave Maria”. She continues “the bride of the Church”, and then to the other woman “give it to the Church, the Pope” pic.twitter.com/5cAy5c2ogE

The tiny sect of internet Reactionaries who call themselves the “sensus fidelium” while consigning everybody else, including the pope, to the apostate pagan Church of Nice that “sacrifices babies to their climate gods” (as one of them instructed me) function exactly like the New York Times film reviewer who was utterly gobsmacked by the landslide re-election of Ronald Reagan: Nobody she knew voted for him.  Nobody the Reactionaries know in all their vast and varied reading at LifesiteNews, Church Militant, EWTN, 1Peter5, or BergoglioChemtrailsConspiracy.com has doubted that narrative for a second.

Once we move past the “Don’t listen to the people who gave it to the Pope and called it Our Lady of the Amazon.  Listen to me!  It’s pagan because it sure looks pagan to me!” argument, what else is there?  Well, we are absurdly told that even if it is a Marian image it cannot represent life and fertility too.  Because whoever heard of Marian imagery being polyvalent?:

And a great sign appeared in heaven, a woman clothed with the sun, with the moon under her feet, and on her head a crown of twelve stars; she was with child and she cried out in her pangs of birth, in anguish for delivery. (Re 12:1–2).

So does this text speak of Mary, or the Virgin Daughter of Zion, or the Church?  CHOOSE! It can only mean one thing. How could Mary be the image of the people of Israel awaiting and bringing forth the Messiah and the Type of the Church?  Preposterous!

Similarly, there is something incredibly perverse about wilfully making oneself blind to the obvious connection between Mary and fertility and new life (not to mention expressing that using pagan forms): 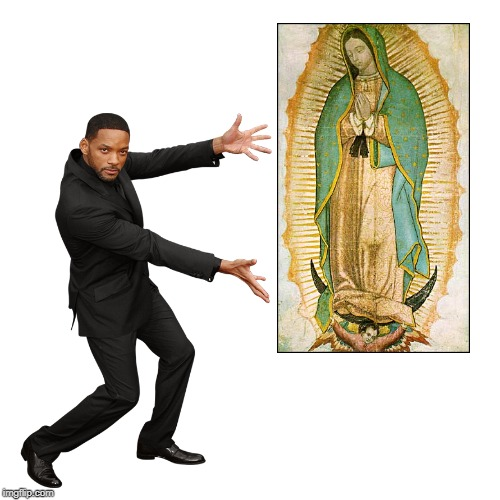 The issue is, therefore, not that the Church is taking pagan forms and filling them with Christian content.  She has done that ever since Paul referred the monument to the Unknown God to Jesus Christ on the Areopagus (Acts 17:22-23).  Nor is it that the Church is worshipping a pagan idol.

It is that modern equivalents of the Judaizers are freaking out about Catholics (not “pagan savages” as the imperialists call them) creating art that does not conform to their aesthetic canons.  They are confusing their culture with orthodoxy: 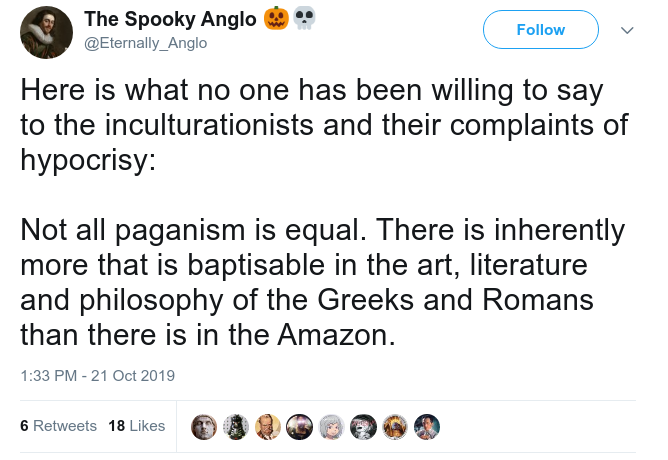 There is no basis in the tradition for this remarkable claim.  But it is very orthodox Alt-Right white supremacy and cultural imperialism.  And this gnat-straining obsession with aesthetics over the camel-swallowing denial of the weightier matters of the law blinds the Reactionaries to real Christian needs of brother and sister Catholics, as well as the fact that their very lives and homes are in danger.

October 29, 2019 Amazon Synod: Of Indefectibility, Infallibility, Prudence, and Panic
Recent Comments
0 | Leave a Comment
Browse Our Archives
get the latest from
Catholic
Sign up for our newsletter
POPULAR AT PATHEOS Catholic
1 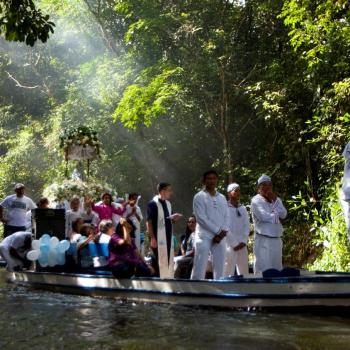