So this feast of clickbait silly is making the rounds again.  It announces we now know that Jesus really looked like this: What it really means is “We are replacing an image of Jesus made to identify him with the Europeans who worshipped him and replacing it with an image made to please people who worship scientism but who do not understand science.” 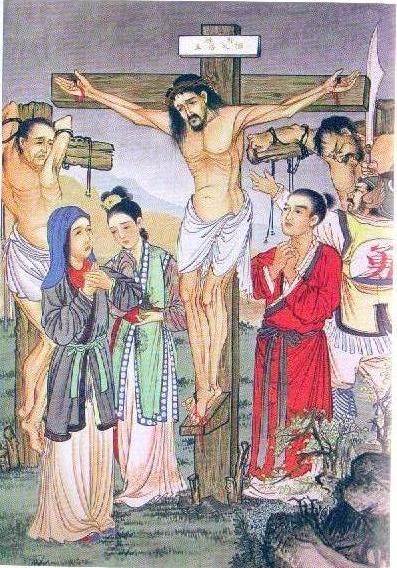 This pedestrian observation is true.  It is also not news to any Christian who knows the first thing about the Faith.  It belongs to that category of tiresome polemic I call the “It may interest you to know…” genre.

Here’s why this stuff makes me roll my eyes. Given data, CGI can accurately render a good artist/forensic scientist’s image of what somebody looked like. Give them a skull and a bit of DNA and they can tell you accurately what the person looked like, including hair color and eye color. It can’t predict for all scars and hairstyles, makeup, etc.. And ornamentation remains guesswork based on how much biography we know. So you can image George Washington pretty accurately.

But the stupidity of claiming you can now show what Jesus really looked like is overwhelming. First, there is the truly delightful headline, “Jesus’ Facial Features Follow That Of Skulls”. As a Christian, I do concede that Jesus, being human, has a skull and that his face followed the contours of it as faces tend to do. Again, this is not news. The article tells us that the guy doing the CGI “reconstruction” “also followed the descriptions of many people from Jesus’ time period discussed in the Bible. His team also x-rayed three skulls from the Semite during that time period.”

In fact, Scripture rarely gives us physical descriptions of people.  We know Zacchaeus was short.  We know David was ruddy and handsome. Once or twice more we get physical details about somebody.  But that’s about it.  We have no idea what any of the apostles look like.  We do have a description of Paul written a century after his death that may or may not preserve a memory.  Certainly it influenced subsequent iconography.

“A man of middling size, and his hair was scanty, and his legs were a little crooked, and his knees were far apart; he had large eyes, and his eyebrows met, and his nose was somewhat long.”

And it comports with Paul’s own description of himself as not much to look at.  But we don’t really know much about the accuracy of this description except for one thing: if it is accurate it makes complete hash of the notion that all ancient Semites look alike.  Paul no more looks like Jesus than Jesus looks like Mary Magdalene.

In simple fact, not a single physical description of Jesus comes down to us from eyewitnesses.

Isaiah tells us, “he had no form or comeliness that we should look at him,
and no beauty that we should desire him.” (Is 53:2).  Ironically, this prophetic description, written seven centuries before Jesus’ birth, tells us more about his physical appearance than any eyewitness.  The gospels are devoid of interest in his face, with one significant exception: they tell us three times that the Risen Christ was not immediately recognized.

The ambiguity of this is not explained.  Is it that the risen Christ looks different than he did before his Resurrection?  Paul suggests this in his strange discussion of the nature of the resurrection body in 1 Cor 15:

So is it with the resurrection of the dead. What is sown is perishable, what is raised is imperishable. It is sown in dishonor, it is raised in glory. It is sown in weakness, it is raised in power. It is sown a physical body, it is raised a spiritual body. If there is a physical body, there is also a spiritual body. Thus it is written, “The first man Adam became a living soul”; the last Adam became a life-giving spirit. But it is not the spiritual which is first but the physical, and then the spiritual. The first man was from the earth, a man of dust; the second man is from heaven. As was the man of dust, so are those who are of the dust; and as is the man of heaven, so are those who are of heaven. Just as we have borne the image of the man of dust, we shall also bear the image of the man of heaven. I tell you this, brethren: flesh and blood cannot inherit the kingdom of God, nor does the perishable inherit the imperishable.

Behold! I tell you a mystery. We shall not all sleep, but we shall all be changed, in a moment, in the twinkling of an eye, at the last trumpet. For the trumpet will sound, and the dead will be raised imperishable, and we shall be changed. (1 Co 15:35–52).

Or is it that the disciples eyes were, as Luke says, “kept from recognizing him”? (Jimmy Akin has fun speculating on the possibility that the disciples were, by God’s providence, given a temporary case of prosopagnosia or face blindness.) We simply are not told.  And the overwhelming impression the New Testament leaves is that the writers are straining at the limits of language to try to articulate the experience of the encounter with the risen Christ.

The closest we get to physical description comes in Revelation, which tells us he appears to the seer as “a Son of man, clothed with a long robe and with a golden sash across his chest; his head and his hair were white as white wool, white as snow; his eyes were like a flame of fire, his feet were like burnished bronze, refined as in a furnace, and his voice was like the sound of many waters; in his right hand he held seven stars, from his mouth issued a sharp two-edged sword, and his face was like the sun shining in full strength.” (Re 1:13–16).

Given the strangeness of the encounters with the risen Christ, I am not willing to deny that the seer is trying to express something his eyes beheld.  But at the same time, trying to derive any forensic data for a CGI reconstruction seems to me to be a fool’s errand.  What matters to the seer is what these details communicate about the glory of the risen Christ.  They are written to communicate spiritual truths about Jesus, not to provide data for a police sketch.

In the end, the one and only physical detail we know about Jesus from the New Testament are the marks of his Passion–which is all the gospels care about.

As to x-raying the skulls of three Semitic randos from the first century as some kind of forensic proof of what Jesus looked like, much less about the length of his beard? Gimme a break.

Similarly, the appeal to St. Paul’s views on hair length are massively culturally conditioned. Within the Jewish tradition, there are a multiplicity of approaches to hair length, most notably the concept of a Nazirite vow in which uncut hair is the mark of consecration to God. Just read the story of Samson if this is unclear to you. It is entirely possible that Jesus’ long hair can reflect this.

“Assuming he had long hair,” you rightly reply. But why assume it? Well, I’m one of those people who thinks the Shroud of Turin is genuine. Here’s why:

So I think that the early Church’s image of Jesus in iconography became fixed to look like that because that iconographic tradition was heavily influenced by the Shroud for a very good reason: it’s real and it preserved the real memory of what Jesus looked like. Early images of Jesus often show him as a beardless shepherd. They are, like scriptural descriptions, aiming to convey a spiritual truth about him: “I am the good shepherd.”

But as the Shroud’s influence spread due to its veneration in Constantinople, iconography increasingly falls in line with it and the depiction of Jesus become standardized to conform to the template it provides.  I think that’s because it provided that template because that’s what Jesus looked like, long hair and all.

The supposed Real Jesus of the more recent schools of thought is, at the end of the day, simply an artist making stuff up based on his own conjectures. Other artists have done so, of course.  But it takes the hubris of post-modernity to do it while claiming you are not doing it and just giving “Science”.  Such images provide no actual insight into what Jesus “really” looked like and are based on no evidence for the very good reason that there is no evidence–beyond the Shroud–of what Jesus looked like.  As with all Latest Real Jesuses, it reveals something about the supposed discoverer of the Latest Real Jesus and nothing about Jesus.

May 4, 2020
The MAGA Cult Always Confesses When It Accuses
Next Post

Catholic
Look! Another Latest Real Jesus!
Catholic and Enjoying It!

Catholic
The sole research tool in the ongoing search...
Catholic and Enjoying It!