Jesus and the Wilderness Tradition

The prophets call us to worship the God who is the source of life, the giver of life. This God is a creative, feral, spring from which our own lives pour. We encounter this God in the wild places, where life is unfettered. We encounter this God when we name and let go (repent) of those structures that trammel life and subjugate people and the land.

Ours is a world in need of prophets and mystics. The Hebrew prophets spoke from the wilderness, a place without cities and kings and temples. The wilderness is a place of creation—where a person is free to be a creature. It is a place where pretenses are stripped away, where the distances can collapse.

They remind us that faith is not a tool of domination. Faith is a feral force that sets us free to love and encounter each other without a blueprint.

When Moses encounters God, he does so in the wilderness and at a mountain. Moses meets God in the place free from civilization, apart from the city. Apart from the place of domination.

It is significant that before Jesus begins his ministry, he goes into the wild:

And at once the Spirit drove him into the desert and he remained there for forty days, and was put to the test by Satan. He was with the wild animals, and the angels looked after him.

Notice that, even though Jesus is “alone” he is not alone. The distance between Jesus and reality has collapsed. The Spirit has brought him to the wild place, where he is in fellowship with creation (with the wild animals). The veil of heaven is opened as he fellowships with the angels. Even Satan is present, to be confronted.

The wilderness is the place of unvarnished truth. I’m not suggesting that if we merely go into the woods, all truth will be revealed. Nor am I suggesting that being in a city necessarily taints us. Nevertheless, it is in the wilderness—the place of creatureliness—that Jesus encounters the world as it is. And he brings that feral faith with him all the way to the temple, where he confronts the religion of empire.

The religion of empire is presented by Satan—to use economic, political, and religious power to enforce the messianic agenda. But Jesus said “no” to three temptations and, angry at the Devil, chose a different way.

The wilderness was the place where Jesus spoke the truth to Satan (the animating force of Empire) and became, himself, the path to liberation.

We need to rewild our faith, to reject our assumptions about religion and power and sustenance. Our most pressing need is practices that help us see the world through a different lens than that of imperial myths and civilizational programming.

The feral faith of Jesus probably has more in common with traditional tribal spirituality than it does with what we think of as “Christianity.” In the prophetic tradition, and in the experience of Jesus, the Feral God is found primarily in creation, not in a temple. This isn’t to say that God is absent in holy buildings. But it is perhaps fair to say that God is present to us more in spite of our holy accouterments and machinations, rather than because of them.

If you have time today, find a spot at the foot of a tree or watching the birds or sitting near some tall grass—any place that isn’t trammeled by cement or fences. Go there and breathe deeply. Allow yourself to linger. Consider what it means to worship a Feral God. 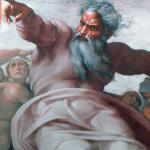 No time to think about what...
slacktivist
Related posts from Mark Van Steenwyk