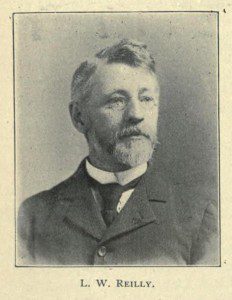 One of the most prolific of Catholic American writers is Mr. L.W. Reilly, who for twenty years has been a regular contributor to newspapers and magazines. He was born in New York  City in December, 1853, and was baptized in St. Peter’s Church, in Barclay Street. He was educated partly in the academy of the Christian Brothers, in West Thirty-second Street, and partly in the College  of St. Francis Xavier, in West Sixteenth Street. A hardness of hearing that had crept upon him in the wake of a cold shortly after he had entered his teens kept out of the ambition of his youth—an ecclesiastical career. He early showed literary aptitudes, which were fostered by wide reading in belles-lettres and by persistent practice in composition. His first contribution to any paper was a poem in the Danbury News. He became editor of the Catholic Mirror in May, 1876, and held that position until January 1883, when ill-health drove him to Florida. While he was in charge of that paper it published a series of leaders in favor of the establishment of a Catholic American university, which were widely noticed; an editorial protest against the bewildering proliferation of catechisms, which led to the preparation of the Plenary Council Catechism; and other articles which had their due effect, and extended the influence of the paper far beyond the Council of Baltimore. Early in 1885 he was offered the editorship of the Catholic Columbian, of Columbus, Ohio, and to the service of that paper he devoted about five years, made up of three engagements broken by sickness. During his connection with it it printed a number of leaders against Judge Atherton, who was a candidate for the Supreme Court of Ohio and who had once declared that the Irish and the Catholics were an incubus on the Democratic Party: a series of papers and civil and religious liberty exposing and refuting the forged “encyclical” issued by the A.P.A.; a succession of chats with young men; a set of editorials against the compulsory attendance of the Catholic prisoners in the Ohio Penitentiary at the Protestant religious services conducted therein by the Methodist chaplain, etc. In 1887 he became editor of the Catholic Review, and while the late P.V. Hickey was in Rome for the Pope’s Jubilee he conducted both that paper and the Catholic American. Ill-health forced him again to resign, to his own and to his employer’s regret. When the latter was about to die he offered Mr. Reilly the editorship of his publications, with the assurance of a life position. This offer was, by advice of the late Dr. Murphy of Washington, reluctantly declined. He does regular work for six Catholic papers and contributes occasionally to several others, and has been a prolific contributor to the various magazines as well as secular papers. He has done more work anonymously for which others have gotten the credit, and produced more “copy,” probably, than any other writer connected with the Catholic press in the United States. His short stories alone, if collected, would fill half a dozen volumes. He translated from the French two books: The Catechism of the Vows and The Principles of the Religious Life (John B. Piet, Baltimore); he contributed to the American edition of the Catholic Dictionary; he wrote the introduction to The Life of Mother Seton and the preface to Father Ryan’s poems; and he has had articles in every prominent Catholic periodical in the United States with one exception, and to that one he has never submitted a manuscript. At the celebration of its golden jubilee, Notre Dame University conferred on him its degree of A.M. honoris causa. He married in 1884 Miss Rose Clare Mapes, a daughter of Captain and Mrs. William H. Mapes, of the United States Coast Guard Survey. The wedding took place in St. Peter’s Church, Washington,  D.C., at a nuptial Mass celebrated by Father J. O’Sullivan, afterwards Bishop of Mobile. He has had children, of whom four daughters and one son are living. On a hillside with a wide prospect, surrounded with woods, far from the noise and smoke of town, he

passes his days like the envied shepherd of Virgil or the first co-laborers of the Edinburgh Review who their motto: “we cultivate the muses on a little oat-meal.”

July 8, 2012 Catholic Poetry
Recent Comments
0 | Leave a Comment
"Wow! I didn't know about that Statement from the US Bishops. The fact that they ..."
Florence Ziegler “It’s About Time They Got Here”:  Catholics ..."
"Very interesting. Why did the Jesuits change the name of the school from a saint's ..."
Kristin Nealon Wilson Ocds Who’s Buried in Catholic Cemeteries?
"It is a joy to that you are back blogging. Thanks for the reference to ..."
Joe A Church Historian’s First Communion
"Thank you for all your enjoyable, informative posts on Church history. I agree that the ..."
Kathleen Brady Looking at the Scandals– A Church ..."
Browse Our Archives
get the latest from
Catholic
Sign up for our newsletter
POPULAR AT PATHEOS Catholic
1 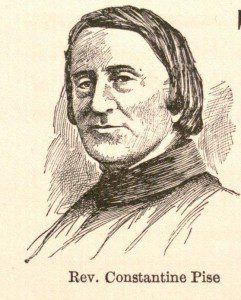 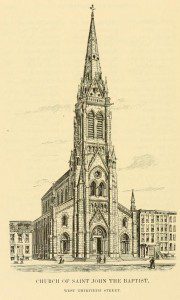 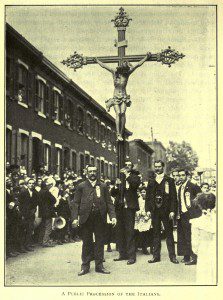 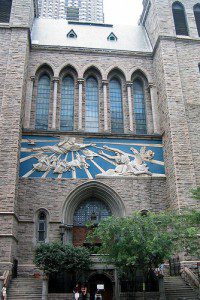 Catholic
A Sermon from the 1880's, St. Paul the...
McNamara's Blog
TRENDING AT PATHEOS Catholic