How many of y’all have heard of the freshman 15? It’s the 15 pounds that college kids put on in their first year in college from all the carbs they eat in the campus dining hall. Well, for the past few months, I’ve been learning about something I’m calling the first year pastor 20. It comes from all the potlucks and eating out that we do. It’s been a humbling experience to preach on gluttony this week when every morning I get on the scale and the number keeps going up and up.

The biggest irony is that gluttony is exactly what I turn to when I’m doing something that fills me with anxiety, such as writing a sermon on gluttony. I like to make all kinds of dips like humus and pesto to take to all the church potlucks. And when I’m feeling under pressure, I get out the pita chips and start mindlessly gobbling, thinking that it will be easier to face the challenge if my body is just a little more comfortable.

It seems innocent enough – the need to be physically comfortable. All the other animals are instinctually driven by this need. When they’re hungry, they eat; when they’re tired, they sleep; when they need to go potty, they go where they’re at, unless they’ve been house-trained. Part of what makes gluttony such a deadly sin is that it seems so innocent. Eating one more chip doesn’t feel like a big deal until we reach into the bag and it’s empty. Gluttony gets serious when it becomes more than just a stomachache but something we build our lives around. And I’m not just talking about food. Our nation’s lifestyle is shaped by relentless advertising that tells us that our lives are supposed to be as comfortable and convenient as possible.

It’s easy to get trapped in an endless cycle of consumption. Take interior decorating, for example. If I buy a nice couch for my living room, then I need a nicer table to go with it. When I get the nicer table, the lamp starts to look shabby. Then the rocking chair needs to get upgraded, then the bookshelves, and before long the nice couch I bought in the first place isn’t chic enough for all the other new furniture so the cycle starts over.

With technology, we don’t really question whether or not we’re being gluttonous, because it’s always better to be faster and more efficient. Do any of you remember how long we used to sit in front of computers waiting for the floppy drive to boot up? Now, if facebook fails to come up in a few seconds, I get irritated and hit reload on my browser, and if it doesn’t correct itself quickly, I might say something that pastors aren’t supposed to say. Jesus said it’s better to tie a millstone around your neck and throw yourself in the sea than to lead others into sin. So if my laptop makes me a glutton, should I duct-tape it to a rock and chuck it into Burke Lake?

But gluttony is about more than just its tendency to make us into irritable, impatient people who are addicted to our own comfort. There are people and things that we neglect when we are gluttonous. The parable of the rich man and Lazarus shows how easy it is for gluttony to make us oblivious to other peoples’ suffering. The rich man in the parable is described with the stereotypical marks of gluttony at the time – dressing in purple and fine linens and feasting sumptuously every day. The reason he ends up in hell is never stated explicitly, though Abraham’s words suggest it has something to do with his neglect of Lazarus.

In a culture where our highest virtue is individual responsibility, this parable doesn’t make a whole lot of sense. There is no indication that the rich man was in any way related to Lazarus the beggar’s demise. He didn’t do anything to hurt Lazarus. He didn’t lay him off from a job or repossess his trailer. Lazarus wasn’t his secret illegitimate half-brother. In fact, the Bible says that someone else put Lazarus down at the rich man’s gate. Why didn’t that person take care of the beggar instead of dumping him on the poor rich man to deal with? And Lazarus didn’t knock on the gate; he didn’t ask for anything; the Bible says he longed to eat the crumbs from the rich man’s table, but he never spoke up. So why should the rich guy be held responsible for this unassertive beggar who was probably homeless because of a drug addiction or some other personal moral failing?

And the Bible refutes our objections with a minor detail that speaks volumes. Even the dogs would come and lick the beggar’s sores. Despite the fact that the beggar never said a word, despite our lack of knowledge about his background and whether or not he deserved his predicament, even the dogs could muster up enough mercy to go and lick his sores. Even the dogs are more compassionate than we are when our focus on our own physical comfort has made us oblivious to the beggars at our gates. This is the poisonous outcome of gluttony: when our appetites rule our actions, when we put all of our focus on the mindless consumption of food, home improvement projects, electronic gadgets that are faster and sleeker, things that aren’t bad until they become all that we do with our lives, then we lose our humanity to the point that dogs are more attuned to the needs of others than we are.

Now I want to be very clear that the solution to gluttony is not to go in the opposite direction and completely neglect our physical needs. It’s true that Christians throughout the ages have fasted as part of their spiritual discipline. I know that would be a lot more grounded spiritually if I fasted from some of the activities that I’m gluttonous about (such as facebook and the internet). But sometimes Christians develop a very unhealthy martyrdom complex in which we give ourselves points according to how overworked we feel and how much we can say that we sacrificed our own needs. 2/3 of our country’s population is overweight not because we take long siestas like the Spanish do, or work 35 hours a week like the French do, but because we’re so stressed out that eating has become a mindless activity. Pastors in particular have very unhealthy lifestyles, which is why most of us get chubby over the years. Running from one meeting to the next, we might not eat lunch until 3:00, but when we do eat, we gorge ourselves.

What if eating were a sacred activity? What if it really were something we did for the glory of God. Now this means more than just saying grace before I pig out. If everything I do is for the glory of God, then all my eating and drinking and interior decorating and gadget-buying should be shaped by the mission of advancing God’s kingdom. Eating and consuming in and of themselves aren’t bad. It’s eating and consuming without a purpose that is gluttony. If we’re going to be soldiers for the kingdom of God, then we have to eat; if we’re going to open our homes to share Christ’s love with our neighbors, then we need enough furnishings for at least a decent ambience. The rich man in the parable we read today is not a glutton for wearing purple and linen and feasting sumptuously; he is a glutton because he did these things as ends unto themselves rather than opening the gate and giving Lazarus a purple robe and some moist towelettes so they could feast together.

We have a model for the type of consumption that we are supposed to be doing. It’s called Holy Communion. It may sound ridiculous to call a chunk of bread dipped into juice a feast, but what we do when we all come down the aisle to eat from the same bread and dip into the same cup is a symbolic reminder of how every feast in our lives should be. Every meal we have together should involve two things: thanking the God who created everything that is in our plate and forming community with God and other people. We can’t do that if we’re running around like chickens with our heads cut off, scarfing down fast food in between meetings and soccer games. The way to build Christian community is by taking the time to gratefully break bread together.

When I feast without communion and without thanksgiving, I am being a glutton. This is true about all my activities, whether it’s eating, buying things, mindlessly surfing the Internet. But when every meal we eat and everything that we do is shaped by our prayerful journey of following Jesus and seeking His will for our lives, then our life is not gluttony, but a foretaste of the gospel feast we will share with God forever and ever. 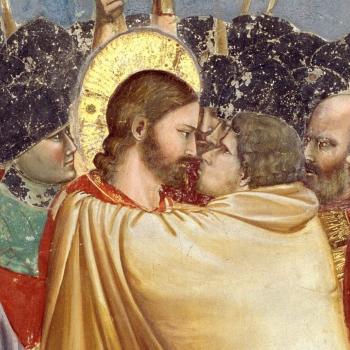